Tim Schafer, the chief executive of Double Fine Productions, showed off scenes from his upcoming adventure game Broken Age today for the first time. He also revealed that his company, rich from Kickstarter crowdfunding, has also hired Hollywood talent to do voice-overs for the title. Both Jack Black and Elijah Wood have contributed their voices to characters in the game. 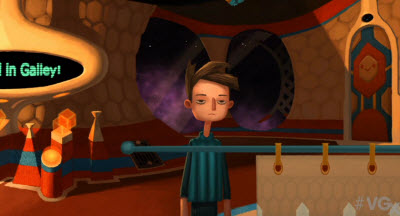 Above: Shay from Broken Age.

The announcement was made at the Spike TV VGX awards show, hosted by Joel McHale and Geoff Keighley.

Broken Age is the first graphic adventure that Schafer, who made games such as Grim Fandango for LucasArts in the past, has created since the 1990s.

To get the budget for the game, the company raised $3.5 million on Kickstarter after it asked for only $400,000. The title is about two main characters, both 14 years old. Players solve puzzles with Vela, who has been selected to be eaten by a giant monster so she can save the town. Instead, she runs away. The game has hand-painted animations.

Among the voice-over actors is Jack Black, who plays yet another character who looks like a big sheep.

And Wood plays a character named Shay (pictured above), who has been raised by an automated spaceship all of his life and wants to go off on his own.