Today, the Hour of Code kicks off, with more than a million students getting their feet wet in the thrilling field of computer science.

To kick things off, learn to code company Codecademy is launching its first-ever iPhone app, a free tool to help kids commit to a daily hour of basic computer-skills education.

“The app was designed fresh from the ground up to take advantage of the iPhone while still preserving all the design tenets from our web app,” said Codecademy cofounder Zach Sims in an email conversation. “It’s interactive, fun, easy to use, and focuses on learning by doing. It gives anyone all they need to get started anywhere at any time with the basics of programming.”

The first iteration will deliver a one-hour learning module. Sims said the company plans to roll out weekly modules in the future to keep students learning.

“We’re working on teaching the basics here, and we’ll continue to teach more of them on the app itself. but this certainly isn’t all we are planning for mobile,” said Sims.

Here’s a first look at the app itself: 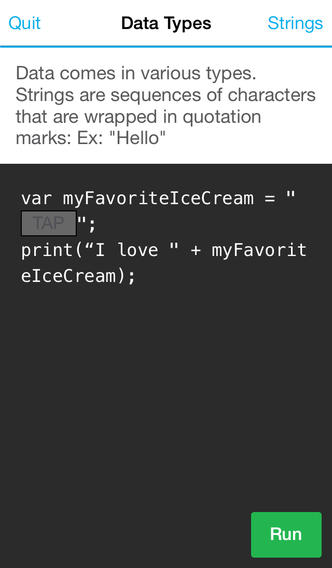 The startup already has an iPad app, but Sims said in an interview that building a coding app for a much smaller screen size was a daunting challenge. And because trying to write code on a smartphone is such an impossible proposition, few or no other companies have attempted similar schemes.

Ultimately, Sims’ philosophy is that an early education in coding (or other digital skills) can save modern students and future employees the immense investment of time and money that a four-year university degree requires.

“Codecademy on the web has helped millions of people learn the programming skills they need in order to be successful in a digital economy,” Sims said. “We’re intent on closing the gap between education and employment for digital skills, and we’re just getting started.

“One of the most frequent requests we got from our learners was a way to learn on the go in the spare minutes that they’d otherwise use playing a game or surfing the web. … We’re hoping to introduce anyone anywhere to the hour of code to get them interested in programming. the iPhone is a super easy to use platform that kids everywhere are glued to — this will hopefully replace an hour of something like Candy Crush [Saga]!”

And for that use case, a simple iPhone app works perfectly.

As far as Codecademy as a whole, Sims said he characterizes the business as “healthy! We have millions of people that have used Codecademy and many that have been quite successful. Two of Time‘s top 50 websites this year were created by people who learned on Codecademy in the last year. beyond entrepreneurs, we’ve got 6,000-plus schools using our Codecademy after school kits all over the world and individuals learning at their own pace.”

Stay tuned for more this week on the Hour of Code campaign.