Only 14 states in the U.S. currently permit tough computer science courses to count toward graduation requirements for math and science. Meanwhile, some surveys say that 570,000 jobs are going unfilled in computing — and that the demand for software engineers is four times higher than the national average.

Teachers are working to change that. 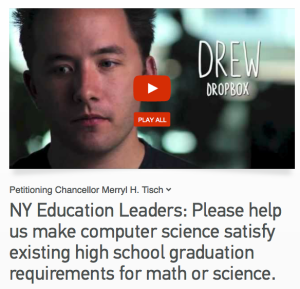 According to Change.org, there are currently more than 25 petitions around the country to ask state and education officials to “make computer science count” for graduation — and for college admission. One, in California, currently has 5,364 supporters and needs 636 more to reach its goal.

“A key obstacle is that rigorous, college-preparatory computer science courses do not satisfy a core mathematics or science admission requirement for either the University of California [UC] or California State University [CSU] system,” petition creator Debra Richardson writes. And she adds: “By 2018, California will need to fill 517,890 computing-related jobs – about half of a total of 1.1 million STEM [science, technology, engineering, and math] jobs.”

This New York petition says that the empire state will need to fill 423,000 STEM jobs by 2018 and that more than half of them will be in computing. Only 2,640 supporters have digitally signed that petition so far.

Most of the number of STEM and computer science jobs that the petitions are citing seem to come from the Conference Board, a business-insights organization. There’s been some concern by some over the past years that numbers like these have been used to justify raising immigration visas for developers and keeping wages low — and some dispute on how real the numbers are.

Whatever the case is there, however, there’s no doubt that computer science jobs are increasing, that we need more qualified people to fill them, and that we’re not adequately training all the young graduates we need.

You can find all the petitions here.