Two brothers in Moscow saw their fairy tale success come true with the launch of the iPhone game Cut the Rope in 2010. Their game and its variants have been downloaded more than 400 million times and their Om Nom character has become a recognizable brand character around the world. 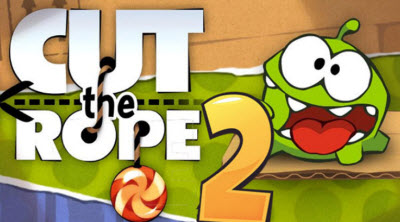 Above: The lovable Om Nom is back in Cut the Rope 2.

Now Semyon and Efim Voinov and their team of 75 people — led by Zeptolab chief executive Misha Lyalin — are back with their long-awaited sequel, Cut the Rope 2. The game will be released on Dec. 19 on iOS and feature the same rope physics game mechanics that will leave gamers scratching their heads. It’s a simple puzzle game with lovable characters like the little green monster Om Nom. Will this game take off in the same way as its predecessor? Zeptolab has done what it could to make the sequel better, introducing more characters and making Om Nom much more of an interactive character. It is also going to do some brand advertising and partner with a number of well-known brands that can help boost recognition of its characters.

But it won’t be easy. There’s lots of competition, and some mobile brands are struggling to stay at the top of the charts with their sequels. We got a good look at the first levels of the sequel and it’s still charming, addictive, and challenging. If Cut the Rope 2 rises to the top of a crowded Apple iTunes App Store, then it will be like lightning striking twice. We caught up with Lyalin for an interview just before the company’s announcement of the new Apple exclusive game. Here’s an edited transcript of our interview.

GamesBeat: You worked on this game for three years, and you did a lot of updates to the original. What took so long?

Lyalin: It’s been three years, so it’s time for another version of the game. Yeah, we’ve been doing updates and full-on releases like Cut the Rope Experiments and Cut the Rope Time Travel. This, though, it’s a second game. It’s different. It has new characters and game mechanics. But you’ll still cut the rope. [laughs]

This time, Om Nom is animated completely, and the other characters as well. In the previous game, he always sits idle somewhere. Here, he can move around. It goes on and on. All the characters interact with different objects in the game. You see all the surfaces you can use to get the candy into Om Nom. It gets bigger and better from there. We’re proud to call it Cut the Rope 2.

GamesBeat: Can you still do this with a relatively small team, or did the team get much larger now?

Lyalin: We’re much larger now, obviously. We started with two people, and now we’re at 75. But not everyone is doing Cut the Rope. We’re staffed up to do a lot more games. 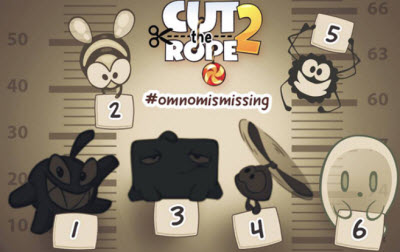 Above: The new promotional campaign features a missing Om Nom.

GamesBeat: This succeeded despite a lot of competition out there. What were some of the assets that helped you do so well? And what did you want to keep for the second game?

Lyalin: Early on, for a lot of people, the notion of cutting the rope on the iPhone screen was a very big novelty. That’s one reason. You can interact with it in a lot of ways now, though. There’s a lot of depth in the game as well.

You can progress pretty easily in the new game. If you want to collect all the stars and get all the secret levels, though, you’ll have to work very hard to get there. There’s a new character in another location. Om Nom goes missing – the spiders stole the candy, he got tied to the rope, and carried away on a balloon. The new character gets introduced throughout the levels as you progress.

GamesBeat: How large is this one? Is there a certain number of levels?

Lyalin: There are five locations, with 24 levels each. This is the forest, where he goes to a junkyard. Each level has a different character that helps him, and you use different game mechanics from each character. You collect items that unlock secret levels, too.

The game has a lot more depth for people who want to play extensively. You can collect the three stars, and also do different challenges once you first complete a level. There are certain power-ups in the game that you can use, like balloons and candy raid and so on. We also have solutions, if you don’t know how to complete a level.

There’s a lot of fun you can have within the game. Almost every object is interactive. It’s not just the candy. It used to be that Om Nom was idle. You’d cut the rope and somehow have to get the candy to Om Nom. Now you can get Om Nom to the candy if you want to, or they can meet in the middle.

GamesBeat: How long did you test different versions of this?

Lyalin: We’re constantly testing new versions. We test different mechanics internally and have playtests as well. I wouldn’t say that this product has been ready for a year and we’ve been testing it all that time, though. We got it done and it’s out.

We’re launching as a premium game, still, and we’re launching exclusively on Apple for 99 cents as an introductory sale. We want people to get the experience that they had before.

GamesBeat: It’s interesting, how physics have led to many of the blockbusters of this generation. Angry Birds and your game.

Lyalin: It’s things like physics in combination with the platform. The touch screen. It’s always with you. The fun physics engine and the great characters and gimmicks. That all makes a great game.

Lyalin: It’s interesting. We tried to conduct some focus groups recently, including one group of people who didn’t know about the game. When we started asking about the game, it turned out that they’d actually played it. It’s hard to find somebody who doesn’t know it, who hasn’t had a friend or their kids or somebody obsessed with the game.