GamesBeat: What do you think about creating brand-new IP?

Lyalin: We’re working on it. With 75 people in the company, most of them are building new IP. Again, we’ve been fortunate that we don’t have to make a clone of something or otherwise stay focused on what will make us money tomorrow. We can look ahead. Our business model is simple. We grow and we innovate with our games. Once they’re ready, we’ll release them to the public. They won’t necessarily all be similar.

We’re very open to what people want. Because we have the marketing platform, because we have all these users, we can propel these new games ourselves. 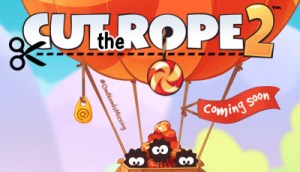 GamesBeat: Is most of your development staying in Russia?

Lyalin: No, we don’t have development anywhere else. We opened up an office in China, but it’s not doing development yet. It will be.

GamesBeat: It seems like a good time to launch now, with the holidays. Does Apple still freeze the App Store around December 20 or so and take a week off?

GamesBeat: There was that nice effect where if you were in the top rankings and the App Store was frozen, you could sell lots of copies. Angry Birds took advantage of that last year. They said they had three million downloads on Christmas day, when all those phones get activated. It’s very different from other game launch cycles. All the console games want to be in stores before Black Friday.

Lyalin: Yeah. We have direct access to consumers now. It’s much faster.

GamesBeat: But was it a coincidence that you finished in time for the season?

Lyalin: No, we were planning to launch on Christmas. We think it’s a good time for games. So many people have experienced our game before, and now they’ll be unpacking new iPhones, new iPads and playing with their friends. Every Christmas, our games go up and up.

GamesBeat: What do you think of the rising cost of acquiring users?

Lyalin: We’ve been saying for a year or more that the dynamics that have happened in the market, where you acquire a customer for, say, two dollars on average, and then get two dollars from the customer on average—It’s been like that for a long time. Now we see data that the numbers are climbing for customer acquisition. This Christmas, a lot of people are spending a lot of money, and they might not make it back.

GamesBeat: So you don’t have to advertise, but you still do? 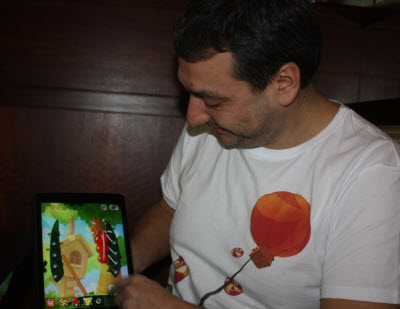 Above: Misha Lyalin of Zeptolab demos Cut the Rope 2.

Lyalin: Because we grow the brand in every possible way – because we do cross-promotion, because we do all the different marketing – we enjoy all of the scale from downloads. That’s a cool thing for us, because it means we can promote our own games, other games that we do, as well as do nice advertising with different animation trailers and things like that, things that our audience likes. It creates a compelling experience for people, and it creates a good business model too.

To us, we’re about consistent growth. It’s consistent growth and layering revenue on top of that. First we start with paid games. Then we add in-app purchases. Those generate more money than paid games for us. Then we add advertising. That generates even more money. As we continue building the brand, we can leave a lot of money on the table today in order to make more tomorrow, but not screw up the brand in the process. That’s been our way of thinking about the market.

What’s fun is that, first of all, we’ve been doing our own thing. Everyone has been screaming, “The world is going freemium! You’ve gotta change! You’ve gotta adapt!” It’s not that we don’t believe in that. We see the trend. But we’ve been able to focus on game development, on delivering something that people will like. We’ll see how well we do. But I think the chances are good that Cut the Rope 2 will be well-received, and we’ll be able to layer on different revenue opportunities. What’s exciting there is that we’ll also get to innovate a lot.

There’s a lot of talk going around about how you have to do the game loop and building all the freemium gates and so on. A lot of people are competing in that. And obviously we’re doing that. But at the same time, we can innovate with things like advertising, which not a lot of people can do. We innovate with allocation-based advertising. Putting two big brands together creates a very different experience.

The most important thing is, because we’ve done all this, because the brand continues to grow, we have an awesome opportunity to launch new games. Both related to Om Nom and Cut the Rope and also some things that are very new. We have a lot of new products in the pipeline.

Lyalin: [chuckles] Why not? Right now the world is changing. Some very big new game companies will be built in this generation. We’re in the process of doing that.

GamesBeat: What platforms are attractive to you? Does it make sense to spread out across a lot of platforms?

Lyalin: We do everything. We do Windows, we do web. We released on Nintendo, and we’ll be releasing more on consoles. If customers have the hardware, and we can deliver a great experience, we’ll do that. Obviously our platforms of choice are iOS and Android at this point. But we’re constantly innovating. We’re launching in Firefox with HTML 5. We didn’t believe the HTML 5 game would run on a phone, but it does. It runs really well.

A lot of new things are coming on different platforms, and we’re trying to watch and see what dynamics work in the market. But one thing is certain. Our biggest focus has been growing the brand and pursuing the traffic and making sure people know who we are. The reason is simple. Acquiring customers is never going to get cheaper. It’s always going to go up. When we have a brand, when people know to expect good stuff from us, customers come cheaper. Right now they’re free. Later we’ll put more money into buying traffic. But still, our customers will be cheap.

GamesBeat: You mentioned putting other brands together with this. Do you already have some in place that are going to happen?

Lyalin: We’ve done some advertising with Starbucks and so on. You’ll see a lot more in the coming year.

GamesBeat: Is there a pattern to how you choose those partners?

Lyalin: There is. First of all, they have to be comparable in terms of reach and size. We’ve done studies to show that the Cut the Rope brand has grown to be recognized by a huge number of people. We’re installed on every fifth smartphone or tablet in the world. We look at market penetration. We look at usage. We look at total portion of monthly active users on smartphones.

All of this gives us the ability to say, “We’re doing something right.” We might not be making as much money as we should be right now, but that’s a process. It’s important to build the fundamentals and layer money on top of that.

GamesBeat: Are there any other numbers that are really interesting to you? Statistics you’ve gathered about the market or your game?

Lyalin: We have a bunch of funny statistics about the number of times people have cut the rope and so on. But we’re watching patterns, the way people play different games. I watch my son, who’s five and a half.

We see people constantly coming back to Cut the Rope. It’s pretty amazing. It’s not like the usual scenario where people will play it intensively and then be done and give up. With us, they play for a long time, and then they come back every so often. It’s pretty amazing. Partially it’s because of updates, but also, the nature of the brand contributes to that. So many people have told us that they want Om Nom as a pet. [laughs] We’re doing a little bit at a time.