Now, six years later, PopCap is back with the official sequel, Peggle 2. The physics-based puzzle game is available today on Xbox One for $12. While PopCap intends to release it for other platforms in the future, Microsoft’s console has an exclusive on the sequel for a limited time.

The game feels good to play. PopCap brought back all of the satisfying physics, colorful graphics, and exciting music for the sequel, while simultaneously trying to introduce some slightly different player powers.

Peggle 2 is still the digital version of popping bubble wrap … if bubble wrap had a hidden layer of skill-based mechanics to it.

Peggle 2’s core gameplay is wholly intact and just as fun as ever — PopCap didn’t make many changes to it. The sequel has players attempting to get high scores while firing pinballs to remove orange pegs from the field of play. To accomplish this, each player character — called “Peggle Masters” — have distinct powers that make things a little bit easier. Bjorn the unicorn, for example enables players to see the angle that the first bounce will take, while a robotic gnome named Gnorman, a new addition to the Peggle roster, can cause electricity to take out multiple pegs at a time, like dominoes.

An incredibly realistic physics system impacts every shot. Only reality bests Peggle when it comes to the sense of weight and outside forces exerted on the ball in Peggle. This is what makes the game so good at milking the endorphin glands in our primitive lizard brains — it just feels right.

This is what enables the basic mechanical loop to work even after six years. It’s such a simple set of goals, yet it feels rewarding. And the more effort you put into the shot, the more rewarding it feels to nail it.

It’s an ideal game to pick up when you have a few minutes, although that’ll likely turn into an hour or more, as I often lost track of time attempting during long Peggling sessions.

Delightful use of music

While you’re playing a level, soundtrack is relaxing. The music is enticing and friendly. It gives everything a zen-like feel.

That all changes the second you clear a level. Hitting the last orange peg on a stage cues a gigantic swell of triumphant music that is difficult to explain. PopCap similarly played “Ode To Joy” after every win in previous Peggle titles, but its original recordings have a lot of extra oomph this time around. While I was playing, it was impossible not to smile and even laugh a little bit at just how victorious the music made me feel.

Peggle 2 even features different victory music depending on the Peggle Master you select, but — across the board — each one will knock your hair back with a wall of sound. 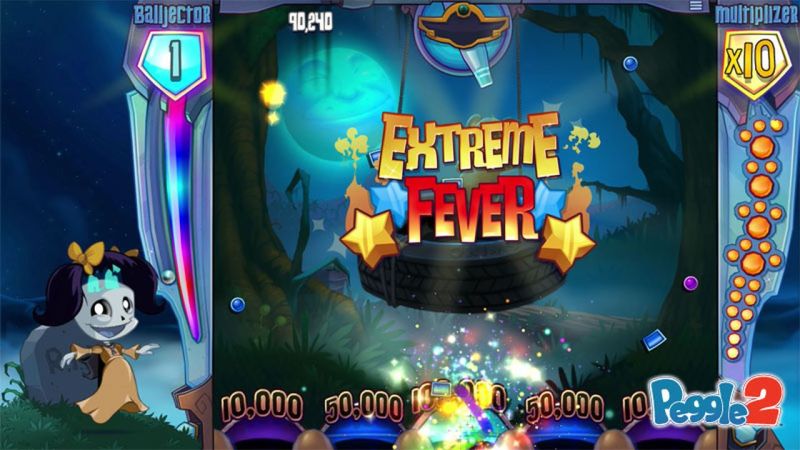 Above: Peggle Master Luna can cause Peggle balls to ghost through blue pegs as if they are nothing but spirits.

Peggle 2 on Xbox One has graphical issues. On at least a handful of levels, the framerate takes a huge dive. This isn’t some 3D-intensive first-person shooter. Peggle 2 is still just a 2D physics-based puzzler with the occasional particle effect. Regardless, PopCap must have still struggled to optimize it for Microsoft’s latest console.

The result is a game that becomes pretty difficult to play due to the chunky visuals. The framerate drops invariably happen on stages with moving pegs, and it’s nearly impossible to time a shot when they are jumping from one spot to another in such a jerky motion. It also made me feel just a tiny bit woozy.

It’s not every level, but it’s enough that it affected my enjoyment of the overall game.

Peggle 2 is still beautiful to look at when it is working smoothly. The world is colorful. The characters animate in funny and interesting ways, but that doesn’t matter when you desperately just want to beat a level so you don’t have to deal with its poor framerate assaulting your eyeballs any longer.

I was pretty excited to play Peggle 2 with my wife. Unfortunately, to accomplish that, I’d need to buy her another Xbox One or send her to a friend’s house. The title features online play, but you can’t pass the controller or play locally. I guess PopCap wanted to focus on simultaneous play to keep things moving, and split screen wouldn’t work really well when you need to see those tiny little pegs.

Online multiplayer is fine. It has players simultaneously firing shots to see who is winning after each round. It rewards players who know how the scoring system works, and matches can take huge swings. It doesn’t make up for the difference that I can’t play against someone sitting on the couch with me, though.

Peggle 2 is a delightful game. The basic gameplay is still satisfying, the world is more colorful and alive than ever, and the music will cause your ears to explode with joy. Outside of the framerate issues, PopCap nailed the presentation.

Mechanically, Peggle 2 is just as good as the previous Peggle titles, and once you get into a groove, it’s really hard to put down the controller.

Developer PopCap and publisher Electronic Arts provided GamesBeat with an Xbox One download code for the purposes of this review.