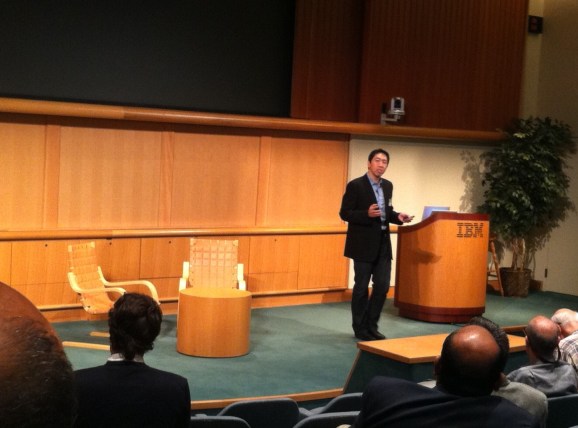 Andrew Ng, a co-founder of Coursera, at an IBM research event

Coursera appears to be racing ahead of its competition in its quest to bring online education to your smartphone.

The Mountain View-based online education provider released its new iPhone app this morning. Coursera is the best known of the massive open online education course providers, often referred to by insiders as “MOOCs,” with its registered 5.5 million students. 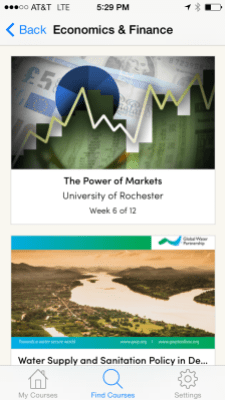 Above: A screenshot from Coursera’s mobile app

I’ve been playing with the app throughout the day, perusing video courses in computer programming (in honor of this month’s coding education push), bioinformatics, and finance. These courses are taught by professors at some of the top universities in the world, including Stanford University and Johns Hopkins.

The app doesn’t differ all that much from the web experience that you may be used to. However, much of the content is still under development, which is frustrating. Many of the courses are listed on the app as “coming soon.”

Chief rival Udacity has yet to release its mobile app. However, Khan Academy does offer a suite of mobile applications, which set a high standard. Android and iPhone users can peruse thousands of interactive video courses and learn to code via the Khan Academy app.

This mobile push will help Coursera reach students in emerging nations, where smartphone ownership is booming. Cofounder Daphne Koller, a former Stanford University computer science professor, is particularly passionate about bringing the educational video courses to young women in the developing world. “If you want to improve a society, the most significant thing you can do is educate its girls [and] we are committed to that,” she said in a recent interview with VentureBeat.

Coursera has raised $88 million in financing to date from GSV Capital, International Finance Corporation (IFC), the investment arm of the World Bank, Laureate Education Inc., Learn Capital., and several university partners, among others.