Scribblenauts, the “write anything, solve everything” series that debuted in 2009, has a concept that doesn’t work that well off paper. Despite multiple tries, developer 5th Cell couldn’t program in enough nouns and adjectives to match the imaginative power of the human brain, so the in-game dictionary was never big enough to accommodate everything players wanted to create.

Doki-Doki Universe (out today for PlayStation 4, PS3, and PS Vita) is a little like Scribblenauts — both creative and original — only indie developer HumaNature Studios doesn’t want you to use your smarts. It does want you to feel good, though … even if that means suffering through a lot of awkward hugs and personality tests as meaningful as the dozens you’ve probably taken on the Internet.

Life, the universe, almost everything

As the robot QT3, you’re dropped on a lone asteroid one day and told to wait. Thirty-two years pass by before anyone comes to get you and your only companion, Balloon (she’s a red balloon). Your ride, Alien Jeff, says that if you can learn enough about humanity, your entire model won’t be declared a failure and scrapped for spare metal parts. This education involves traveling to different planets around the galaxy, making new friends, and helping them resolve problems.

That’s really all there is to it, but the simplicity is what makes Doki-Doki so playful and quirky. The energetic music, goofy sound effects, and cute, animated drawings of creatures from all sorts of planets — talking sushi, garbage people, and bugs as big as robots — create a style that’s charming and sweet. Almost everyone likes to joke around, hug, dance, blow kisses, and give each other presents, and even the grumpiest and meanest of them are good at heart. It’s nice to play a game filled with such positivity. We’re not all so different even though our appearances and situations might be.

It’s also funny: Weight-pumping dudes on the beach are goofy stick figures with hairy chests and big muscles attached to pencil-thin arms, and QT3 himself rides around on ridiculous steeds like flying pigs, coffee mugs, and poo. 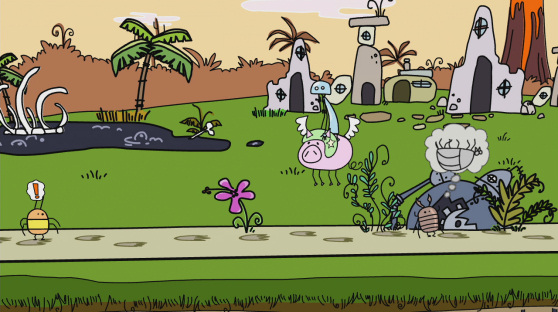 Above: This pig is one of many steeds you can choose to ride.

As bare as stick figure people might sound, the developers didn’t skimp on the details. The planets feature a creative and varied assortment of characters, colorful backgrounds, and moveable objects (like houses and plants), many of which you can collect as decorations to customize your own home planet. And the space map looks awesome: a pretty blue spread dotted with dozens of tiny asteroids and rotating planets of various sizes.

All of this makes for a memorable presentation: Every action, character, and line of dialogue bursts with personality, and it’s fun skipping from planet to planet. Each one is unique.

The main mechanic of Doki-Doki is taking thoughts of people, animals, or things and bringing them to “life” through miniature, sticker-like animations that move and interact onscreen. These are called summonables, and they’re key to solving the majority of everyone’s problems. Someone might need or want something that only you, with your cool robotic powers of imagination, can conjure.

These mini-animations also appear in the mail system, which enables you to receive letters from characters (and send digital messages to your real-life friends through Facebook). It’s a nice, thoughtful addition to a game about making new friends — not meeting new people and then forgetting about them an hour later. The various personality tests you can take also feature these little animations, and I found myself wanting to see as many as possible. 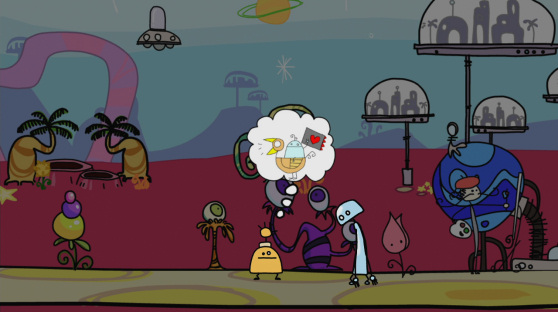 Above: You’ll summon all sorts of ridiculous things to make characters happy.

As it turns out, learning about human nature isn’t all that exciting. In visiting different worlds, QT3 gains knowledge of human behavior and emotions like bullying, prejudice, pride, and love, but the real message seems to be that be they insect, great cosmological being, or Egyptian ghost, people are pretty greedy and self-centered.

The characters, who can’t communicate with each other all that well, ask more and more of QT3. And while making their dreams come true and helping them settle misunderstandings makes for a cute story, it’s a boring job for players. While the situation on every planet is different, as are the inhabitants there, the pattern is the same: check goals off a list.

Fulfilling objectives doesn’t take much more thought or energy than talking back and forth with people or opening up your stockpile of summonables and immediately locating the one you need, usually right on the first screen of thought bubbles. And if you don’t have it, chances are you’ll find it by shaking down some nearby trees or houses for presents to open.

Taking personality tests on asteroids is fun at first, but like the planet stories, these quickly become uninteresting and routine. By answering silly questions (“What are the rats doing in this picture?” for example), Doki-Doki builds what it believes to be an accurate psychological profile of you, which you can view by traveling home and talking with Dr. Therapist. At the end of every quiz, it also explains what each of your answers says about you. 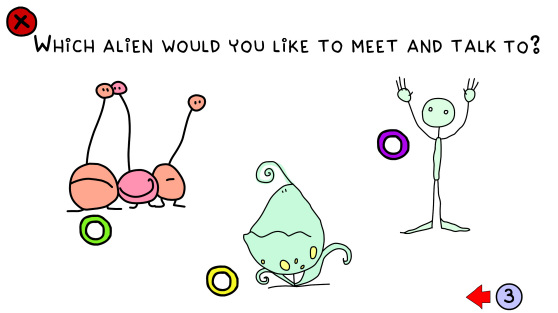 Above: An example of one of the many, many … many personality tests.

The developers were flat-out guessing. Half of the time, the assessments are fairly true, but they’re completely wrong just as often. And as I chose an answer, Doki-Doki sometimes failed to recognize the real reason why, deciding upon some other logic that in turn changed its fickle interpretation of me. Rarely were the results more insightful than a newspaper horoscope.

Completing tasks for characters sometimes means making one of three movements, or gestures, with the right analog stick: left to right, up and down, and in a circle. Doki-Doki is a little finicky about how you perform these motions, but what’s more bothersome is what happens afterward: Hugging in particular is awkward and … weird. The gestures are stilted and oddly inappropriate (why are these characters jumping into each others’ arms?!) and cause the game to pause for a few seconds after they finish. It’s not so much warm and fuzzy as uncomfortable and boring to watch.

The PlayStation 3 version, at least, is glitch city: I experienced plenty of freezing, one instance of lag, and one complete restart of the console. Bad, robot, bad. 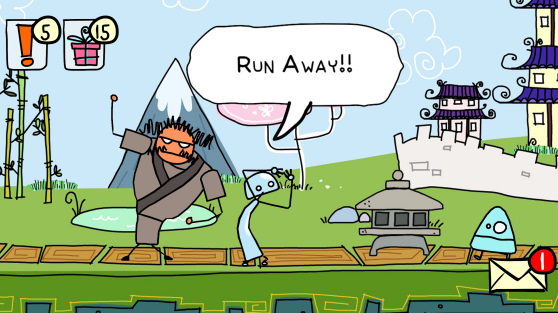 Doki is all about the importance of empathy, so why is it that you can get some presents from characters by making them not love you but instead hate you? In some cases, you’ll need to annoy and upset characters (by throwing them around, showing them their fears, and so on) so much that they “surrender” whatever present they’re hoarding. The reward doesn’t seem worth the evil act. Being mean didn’t feel good, so I avoided going after these types of gifts.

Yup, $15 — a typical price for a download game like this — is only the start of what you’ll pay if you want to play everything in Doki-Doki Universe. Because I wasn’t able to access the PlayStation Store during my playthrough, I can’t say how much the extra content costs, but I do know that six planets and 12 asteroids visible on the space map are only available through additional payments. These appear as three separate groups, so it’s possible you need to cough up money for each set.

HumaNature Studios made a good start in offering a game that encourages friendship and kindness, not violence. I only wish it had put as much energy into making the game fun to play as it did perfecting the look and sound. It has a homemade, handcrafted feel to how everything comes together, and that’s special and rare.

Some of these complaints are minor gripes (the personality tests are optional, not mandatory, and who knows — some people may enjoy badgering characters to get more presents), but others are more serious, like the bugs and restricted content. Like QT3, the developer has a lot to learn. As feel-good as Doki-Doki Universe is, there’s not much going on under the surface.

Doki-Doki Universe was released for the PlayStation 4, PlayStation 3, and PlayStation Vita on Dec. 10, 2013. The publisher provided GamesBeat with a digital copy of the PS3 version for the purpose of this review.