The circus is a magical place. For actress-turned-game developer Irina Vaganova, it’s home. 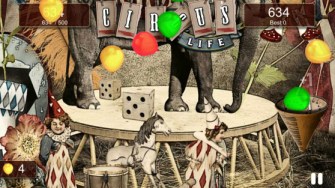 Above: A balloon minigame.

That’s why Circus Life, out this Thursday on the App Store (free for iPhone, iPod Touch, and iPad), is more than the average circus game — if you’re ever even played one before (I haven’t). Vaganova and her new European studio Dolce Vita Games used firsthand knowledge to put on what’s probably the most authentic performance you’ll ever see re-created on iOS.

“Growing up in the circus certainly gave me unique knowledge of the people and their personalities, as well as the costumes and the colors,” Vaganova told GamesBeat in an exclusive interview. “I borrowed from my day-to-day experiences and the themes of the circus that resonate most with visitors: balloons, snacks — like popcorn — and animals. Everyone remembers the feeling they had when they visited the circus for the first time, and I want to capture that same sense of wonder in Circus Life.” 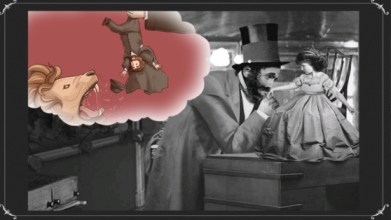 Above: The 1920s vintage-poster style.

The title, styled after the 1920s (the “glory days of the circus”), is about a sad man named Mr. Putt who joins the circus and pursues the heart of its star, the tiny Ms. Lilli. He succeeds in asking her out on a date, but the overprotective circus director notices and starts making life hard for Mr. Putt.

Those characters are based on real people from Vaganova’s life in the circus — people who, like anyone else, endure difficulties and follow dreams.

“When I was a child, probably no more than 7, a lilliput woman who worked alongside my parents used to babysit me,” Vaganova said. “I was short for my age, but still taller than my babysitter. She was an amazing lady and would tell me all kinds of funny stories about her incredible life.” 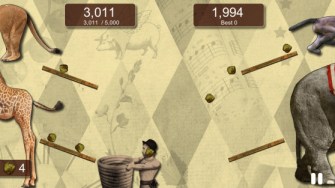 Above: Collect the animal droppings.

One of those stories was about a jealous circus director who loved her even though she fancied someone else. That memory became the basis for the game, which is, in a way, all about people.

“The biggest influence from my time growing up in the circus was the sense of family and community,” said Vaganova. “Everyone lives close together, practices and eats together, and travels together, so it becomes a lifestyle more than a career. I think that is why I chose to call the game Circus Life.

“The circus used to be strictly a family business during the 1920s, which made it impossible for outsiders to become circus stars,” she said. “Many circuses in Russia and other places are still run by families, but now they hire performers from outside the inner circle. My father was a renowned gymnast, and he was able to earn his way into the circus because of his success in international competitions.” 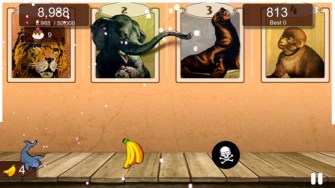 Above: Which doesn’t belong?

These performers were treated like “national treasures” — as respected as famous ballet dancers or actors. But some parts of Circus Life don’t exactly sound glamorous — and there’s a reason for that. Vaganova said her goal wasn’t to make a “circus simulator.” The game doesn’t include cliche choices like juggling or knife-throwing but instead minigames themed around popcorn, balloons, and animal poop.

“The goal for the game isn’t so much about making mundane tasks more thrilling, but more about acknowledging the hard work and diligence behind circus life,” she said. “As magical as the circus seems from the outside — and it really is a very special place — it takes an extreme amount of work behind the scenes. I had to practice routines over and over again until they were perfect, and sometimes I felt very discouraged. 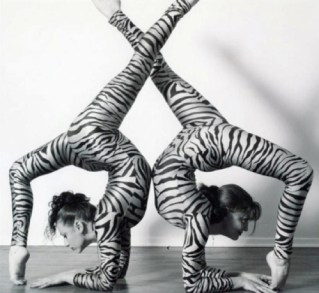 Above: Vaganova in the circus.

“Working in the circus meant moving to a new city and a new school every few months,” she said. “We had to ‘earn’ our breakfast by practicing our performances in the morning before we would eat.”

Not everything in Circus Life is based on real life. The balloon minigame, says Vaganova, came to her in a dream. “I was bouncing these huge colorful balloons around, trying to make them fall into a magical balloon collector.”

The minigames last as long as players can keep up with them; the developer added “risk vs. rewards elements” to help keep gameplay fresh. For example, in the balloon minigame, players must avoid touching the black bomb balloons, or it’s game over. But knocking one of the “safe” balloons into one can push it into the balloon collector for 100x points. Your score accumulates each time you play and unlocks more content when you reach a certain amount. 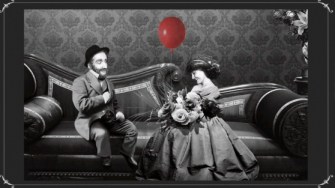 Above: Love in the circus.

“I wanted to make a game that was simple to play for casual players yet endless in difficulty to ensure that it was challenging for more experienced gamers,” said Vaganova.

That difficulty parallels the countless hours of training she put in to perform in front of an audience of thousands — the same struggle that the main character undergoes and that the best players embrace as a challenge.

“People say that ‘nothing comes easy,’ and that’s especially true of my experience in the circus,” said Vaganova. “That being said, I would never trade my childhood for anything else. It really was a dream come true, and I hope players will feel the same when they finish Circus Life. It is a fun and challenging journey, and I believe they will feel a strong sense of accomplishment when they see how the game ends.”