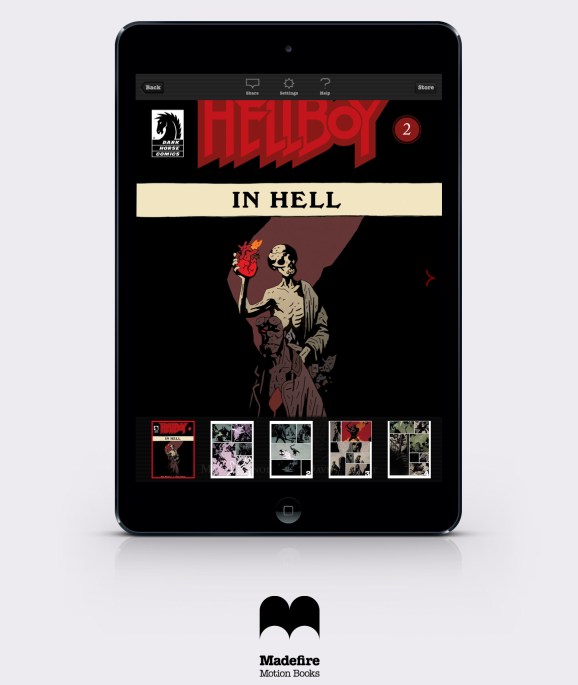 Madefire has created a new storytelling platform that incorporates the full range of a mobile device’s hardware to produce what its calling “Motion Books.” hat isn’t limited to turning pages — which is the universal method for advancing a story with books. Unlike the majority of digital comic books that were only converted from print, motion books provide for artwork on a single page to move and interact with the reader (like swiping or tapping a touchscreen or moving the device to have artwork on a page shuffle around), as I previously described. It’s an interesting concept because its not only trying to advance the medium of comics, but its trying to build a new business behind it.

Material from the Hellboy motion books comes from the first issue of the original series. What Madefire has dubbed as a “builder” will translate the original story to the motion book format. Each original issue will spawn two separate “episodes” that sell for $2 each, and can be purchased via Madefire’s webstore or through its iOS apps.

“Adding Hellboy motion books on Madefire is really important because it shows comic fans and creators the potential for a new form of storytelling,” said Madefire CEO Ben Wolstenholme in an interview with VentureBeat. “And especially with [Dark Horse Comics publisher] Mike Richardson always being at the forefront of digital comics, having Hellboy motion books is a huge win for us.”

Madefire has previously signed up other notable comic publishing partners, including Image/Top Cow (The Darkness), IDW (My Little Pony, Star Trek, Transformers), BOOM! Studios (Next Testament, 2 Guns), and even an unofficially announced collaboration with DC Comics. Adding Dark Horse to the mix is significant considering that its the only major publisher that bucked the industry trend of selling its content through Comixology in favor of producing its own digital distribution platform.

Founded in 2011, the Berkeley, Calif.-based startup has raised a total of 7.4 million in funding to date from True Ventures, with participation from Anthem Venture Partners, Crosslink Ventures, Correlation Ventures, as well as a handful of angel investors such as Flipboard founder Mike McCue, former Apple SVP of applications Sina Tamaddon, Automattic CEO Toni Schneider, and comic creator Dave Gibbons.