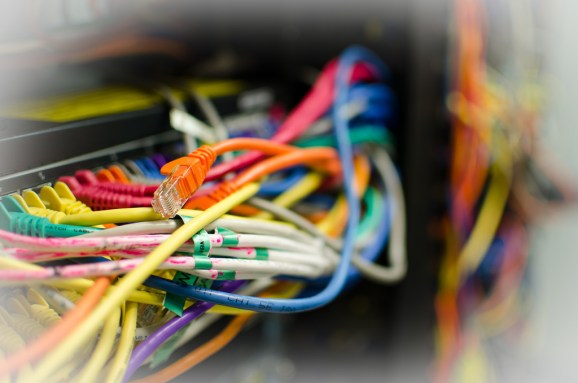 A well used Cisco switch. For networking startup vIPtela, it's all about the software that can make switches work smarter.

VMware’s $1.26 billion acquisition of networking startup Nicira might still be on the minds of investors who like to sell technology into big companies. Now we’ve learned that Viptela, a secretive startup working on related but different technology, has picked up a hefty $33 million from Sequoia Capital.

Virtualization — simulating hardware through software-based “virtual” machines — has been a core strategy for servers for many years. In the past three years, technologies to virtualize whole networks have come to the fore.

VMware integrated Nicira’s innovations into a new product called NSX, which lets IT administrators quickly set up virtual networks through which packets of information can be sent around a data center. This is attractive partly because management from one central place makes life easier for employees handling network operations.

At the same time, other big networking companies, including Cisco and Juniper — where Viptela’s founders picked up first-hand experience with hardware and software — have been rolling out products and announcing investments.

Those vendors and others have contributed money and engineering resources to a standardization initiative called the OpenDaylight Project.

Taken together, the field is usually known as software-defined networking (SDN) and certain technologies go for a different label, network virtualization. The nomenclature can be controversial: While Cisco has been a sizable contributor to OpenDaylight, it has also come up with a blend of tailor-made networking gear and software that lets customers set networking policies for each and every software application. Cisco likes to call this application-centric infrastructure.

These are still early days for Cisco’s offering, and there’s no indication yet that lots of companies are shelling out actual dollars for it. But it’s obvious that network vendors are at least making more software available for administering networks — and sometimes enabling network administrators to adopt more basic, low-cost networking hardware while moving network intelligence from the network hardware over to server hardware.

Which brings us back to Viptela. The company is keen on carving out a special place for itself in a market where lots of startups have already tried taking shots at replicating the success of Nicira, not to mention the incumbents’ activities. And it’s got its own terminology for what it does: “computer networking.”

The company did not say how much money, if any, it had raised prior to this round, and would not confirm the amount of the current funding.

Prabagaran said Viptela is focusing on a kind of networking known as wide-area networks, which connect data centers in multiple geographical areas. It’s an area that few vendors have targeted. For instance, Pertino has talked about wide-area networking, although it has gone after smaller deployments rather than the large enterprises Viptela is interested in. And it sounds like for Viptela, joining on-premise data centers with public clouds could be an area of focus along with the connections among big companies’ multiple sites.

AllThingsD broke the news about the Viptela deal today. In his AllThingsD post, Arik Hesseldahl writes, “One emphasis will be on reducing the operational costs of running these networks,” attributing the notion to unnamed sources. Simplifying encryption across networks and “enabling new methods to connect to cloud services,” according to Hesseldahl, are other priorities for Viptela.

Those goals may help the company stand out in an increasingly crowded field for SDN and related technologies.

Following through on such value propositions would distinguish the company even further. After all, paying customer deployments are still relatively uncommon in this market.

The stated goals of other SDN products include centralized management, greater flexibility, or a more fitting architecture for cloud-enabled data centers where servers are virtualized and applications tap various servers in many racks all around facilities.

Perhaps Viptela will expand its focus to provide those benefits with its product down the line. Or the startup could be a candidate for an acquisition from a company that has not yet solved the problems that Viptela is working on.

More immediately, though, the company can spend time developing a reliable product and coming up with a plan to capture attention. Just as soon as it’s ready for more attention, that is.