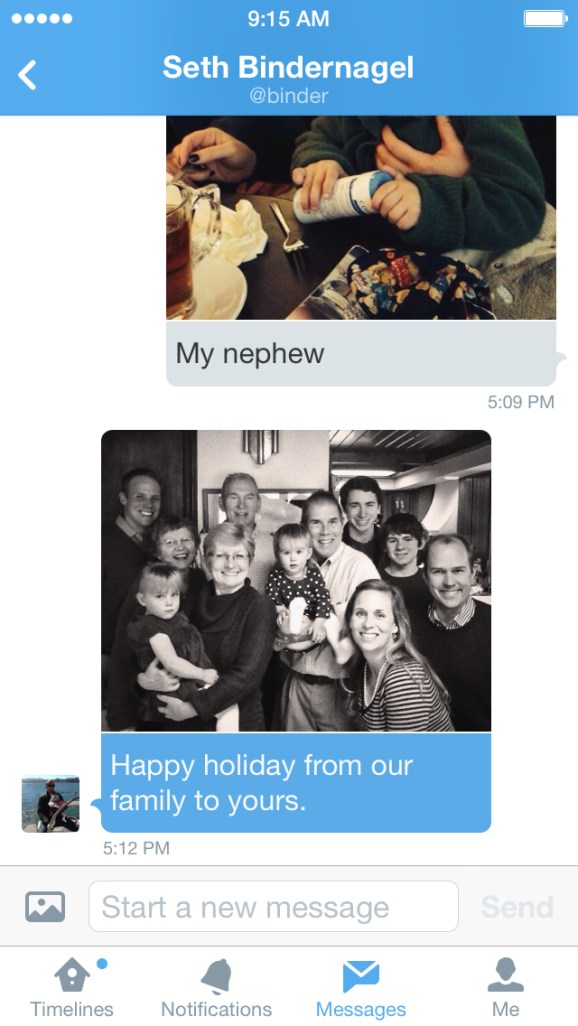 After practically being hidden for much of the service’s lifetime, Twitter is finally highlighting its private “direct messaging” feature in the latest update for its iPhone and Android apps.

Now you can send photos through direct messages, a clear sign that Twitter is beginning to tread into territory currently held by hot messaging apps like WhatsApp as well as Snapchat’s private photo messages. Additionally, your direct messages (DMs for short) now have a coveted spot on Twitter’s main navigation bar, right alongside your timeline view and notifications.

The changes may not seem like much on the surface, but they represent a fundamental shift in how Twitter previously treated direct messages in its apps (before, you had to find the tiny message icon on your Twitter profile). I wouldn’t be surprised if many Twitter users didn’t even know that Twitter had a private messaging feature, given how hidden it used to be. Now, Twitter highlights DMs as a core feature, showing that the company cares as much about private messages as those broadcasted to all your followers.

A recent rumor suggested that Twitter was working on a messaging app of its own to compete with the likes of WhatsApp, but that never made much sense to me. Why build a new app when you’ve already got messaging inside of your app?

Twitter also added the capability to swipe through different timelines on touchscreens: Your “Home” timeline is still the default, but swiping right now reveals the “Nearby,” “Discover,” and “Activity” timelines, which highlighted tweets close to you, trending tweets, and those from your friends, respectively. Twitter previously tried to highlight its Discover timeline on its navigation bar, but that’s now been replaced by direct messages.

The changes show that, even though it’s massively successful, Twitter is still trying to figure itself out. That’s especially true on mobile devices, where screen space is precious and tiny changes can fundamentally change how people use your apps.