Shoaib Makani, a former venture capitalist at Khosla Ventures, spends a lot of time at truck stops these days. But he’s not there for the luxurious amenities, as convenient as a laundry machine next to McDonald’s may be.

Makani is the CEO of KeepTruckin, a startup that aims to make life a lot easier for truckers and upend the current fleet management model, which has historically relied on expensive, proprietary hardware.

The $500 billion U.S. long-haul trucking industry is hyper-fragmented, with around 3 million drivers spread across 434,500 companies. Less than 300 carriers have a fleet of more than 1,000 trucks. Generally, only those major carriers can afford the GPS hardware from fleet management incumbents like Omnitracs and PeopleNet. Though some smaller outfits make extensive use of tech, including GPS and sensors that measure fuel economy, many little carriers stick to text messages, Excel, and just old-fashioned pen-and-paper to keep track of their drivers.

The San Francisco-based KeepTruckin today released its eponymous mobile app for iOS and Android. It enables truckers to log to track and edit their driving logs, submit logs to dispatchers via email or fax, and alerts drivers if they have “hours of service” violations. (Truckers have federally mandated limits on how many hours they can drive consecutively and in a week, and they’re fined if they break those limits.)

“It takes the burden off them from a mental perspective, but also from a financial perspective — they don’t have to pay to fax written driving logs from truck stops,” Makani told VentureBeat. 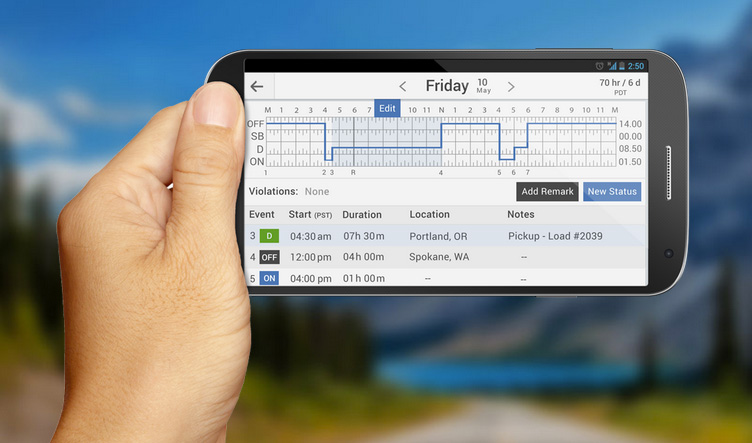 Above: The KeepTruckin mobile app

KeepTruckin makes life easier for dispatchers, too, who can track their drivers’ logs and locations (if enabled) through a web app. They can also use the app to send load details and other messages to their fleet. And rather than having to manually audit their fleet logs, they can rely on KeepTruckin to do it automatically.

All the information gets stored on in KeepTruckin’s cloud, which is powered by Amazon Web Services. And all current KeepTruckin services are free for drivers and dispatchers.

“If we know where they are, who they are, what they do, we can do a lot of stuff with that: low-cost freight factoring, automated brokerage, dynamically priced insurance — a lot of interesting stuff can happen once you have that digital connection,” said Makani.

KeepTruckin is developing its first premium service now with a release scheduled for the second quarter of 2012.

Google Ventures is the major backer of the San Francisco-based startup, which raised a $2.3 million funding round in July 2013. Makani had previously sat on a board with Google Ventures partner Joe Kraus, and after he heard about Makani’s new venture, he funded the majority of KeepTruckin’ seed round. The Google team has been really helping in addressing some of KeepTruckin’s usability challenges, said Makani.

Naturally, Makani thinks there’s a big market opportunity for KeepTruckin. Around 80 percent of truck drivers have smartphones, he said, so if they find an easier way to manage their logs, they’re going to lobby their employers to adopt it.

“They really, really value the individual utility of this, so they self-adopt,” he said. “While there’s plenty of incumbents in the fleet management space, there’s nobody that’s going bottoms up — really because it wasn’t possible until recently.”

KeepTruckin in based in San Francisco, Calif. and currently has eight full-time employees.