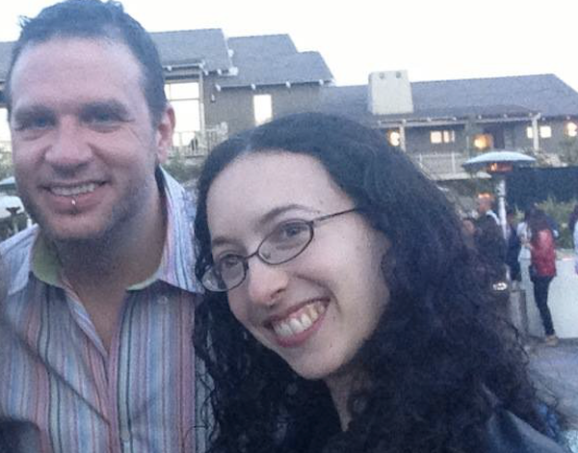 Elissa Shevinsky and Pax Dickinson of Glimpse, together again.

Elissa Shevinsky is returning to Glimpse Labs as chief executive. The surprise: Controversially outspoken co-founder Pax Dickinson will be staying on as her chief technology officer.

Dickinson became infamous earlier this year after Valleywag published a long string of tweets that were unbecoming the CTO of a major business publication (Business Insider). Business Insider then fired him.

Meanwhile, this caused trouble for Dickinson’s other startup, Glimpse Labs, where he was CTO and co-founder. Glimpse is a sort of “Snapchat for adults,” an app that encrypts all the messages sent between users, giving each user his or her own encryption key. Its aim is to be a completely secure way to send messages, without fear they’re being saved on some server or subjected to government snooping.

Glimpse co-founder Elissa Shevinsky — a woman with serious tech credentials — said she wasn’t going to put up with sexism in tech anymore. So with one of his tweets joking about rape, and another stating, “feminism in tech remains the champion topic for my block list. my finger is getting tired,” it no longer seemed feasible for her to work with Pax, and Shevinsky resigned from Glimpse.

Not only was it not feasible, but it just wasn’t right, Shevinsky said.

‘This is not a free pass’

But she was a co-founder. Glimpse was her idea, her baby. She had built the team. And Dickinson could code like no one’s business, Shevinsky said, and believed in the mission behind Glimpse.

So today, after two months outside the startup she co-founded, Shevinsky is returning to Glimpse Labs at CEO – and she is keeping Dickinson on as CTO.

Rather, she said, “People should have the opportunity to grow and change and we should give them space to become the people we hope they will be.”

And the person Pax Dickinson can be, Shevinsky believes, is the man to build Glimpse.

“I really trust that he’s going to be really different online,” she said, “and that’s probably the most important thing I needed to see.”

Other women who have worked with Dickinson also support him. He’s “definitely not a brogrammer,” said Julie Sommerville, a software architect at Business Insider.

An apology from Pax is going up on the Glimpse website today. Here’s an excerpt:

With the help of some awesome friends and a lot of personal reflection, I’ve decided to explain and apologize publicly for some of my words. The N-word isn’t appropriate even in a joke or quote, and neither should I have joked about rape. Things I think are funny and that the people who know me understand I don’t mean maliciously are still upsetting to others. They don’t belong on a company executive’s feed. I wasn’t an executive when many of the most egregious tweets were written but that doesn’t excuse it. It was a lapse in judgment and I’m entirely responsible for that. I sincerely and unreservedly apologize to anyone I offended.

“Pax and I actually have a very strong working relationship,” Shevinsky said. “He respects me very much and he really wanted us to do this together. The last two months were really a negotiation about what the company would look like moving forward.”

That led to today’s announcement that Shevinsky is returning as CEO, and as Dickinson’s “ladyboss,” a term both of them embrace.

“’Ladyboss’ is about the idea that it’s OK — and even fantastic — to be a woman in charge,” Shevinsky explained. “It’s the unfortunate truth that some men can be uncomfortable having a woman be their boss, be their CEO, be their director, and that’s certainly been a difficulty for me.”

As for Dickinson’s return, “People deserve a second chance,” said J. Kelly Hoey, the co-founder and managing director of Women Innovate Mobile, an accelerator that is a supporting partner of Glimpse. (Disclosure: I’m a mentor for WIM.) “And sometimes, it’s not until you put your shoe in the dog shit and your foot in your mouth, that you realize what you’ve done.”

Public drama aside, Glimpse is trying to address a need that’s increasingly relevant to many people: Finding a secure way to communicate. To that end, Glimpse has a cryptography advisory board that includes some of the folks behind encryption pioneer PGP, including Brett Thomas, Gene Hoffman and Bob Cohn. Some are now working on Silent Circle, another company that aims to provide completely secure telecommunications. Wickr provides a similar service.

“If you are crossing a certain line, we are going to be fairly transparent that we’re going to be cooperative with the government,” she said. In a case where the government is investigating a drug or child pornography ring and presents Glimpse with a warrant, for example, the company would cooperate.

Even then, Glimpse will only be able to hand over some metadata — that the person is a member, for instance – along with the encrypted versions of their messages. But because it uses end-to-end encyrption, Glimpse won’t have the user’s personal encryption key and won’t be able to un-encrypt the messages for the feds.

The company’s primary social mission is that of digital rights and freedom of expression, Shevinsky and Dickinson said.

The app will be free, but there will be premium content and extra services users can buy, along with products such as Ladyboss T-shirts.

“You eventually need to monetize, so why not be transparent at the start about how you have to?” Shevinsky said.

Glimpse will be open for business soon, and you can pre-register at weneedglimpse.com.