After years of preparation, Disney is launching its Club Penguin virtual world on the iPad today as a subscription service.

The move is another sign that huge brands are adapting to the fast-changing world of mobile in an attempt to go where the consumers.

The new app will let new members and subscribers interact on the Club Penguin Island in a touchscreen experience. The move is a big one since Club Penguin is the largest virtual world for children with more than 7 million children playing. It is also big because it shows that Apple can be flexible in allowing subscription business models that it hasn’t embraced on a large scale for iOS apps.

The app will let players enjoy many of the same gameplay and social features found in the web-based virtual world. The Club Penguin app will now offer recurring in-app subscriptions for the first time. 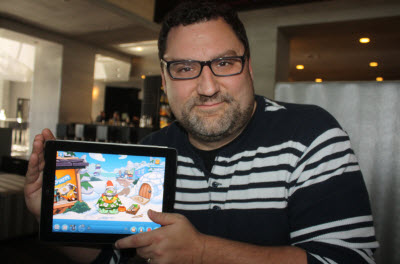 Founded in 2005, Club Penguin was one of the most popular kids virtual worlds alongside Habbo Hotel and IMVU. Disney bought it for $350 million (plus another $350 million in bonuses) in 2007. That started a huge boom in virtual worlds for kids. But most of those died off as the world moved on to iPhones and other kids experiences on computers or game consoles.

“Club Penguin has endured,” Chris Heatherly, head of Club Penguin at Disney, in an interview with GamesBeat. “The competitors came and went. The place where you have to be these days is on mobile, and we wanted to bring the same experience over to mobile.”

The world started as a big chat room, but one that could be made safe for kids. Over time, more than 200 million penguins, or virtual characters, have been created. The world is the No. 1 kids virtual world. It is available in five languages and 190 countries.

“Lightning struck with the Adobe Flash-based world on the Internet, and we have that opportunity again with mobile,” Heatherly said.

Disney actually made the app available in May as a companion app test without much fanfare under the My Penguin name. Now it will give it the full Club Penguin branding and marketing push, as the company is fully ready to get behind it now. The app has already been updated four times, and now Disney is also turning on different options that make it into a full-fledged service akin to the online version.

“We didn’t want to call it Club Penguin until it stood on its own,” Heatherly said.

Now the app will feature the world map, frequent location and content updates, increased socialization such as the addition of locations like the Town, Dance Club, Clothes Shop, and Coffee Shop. Up to 40 penguins can interact in these locations at a time. 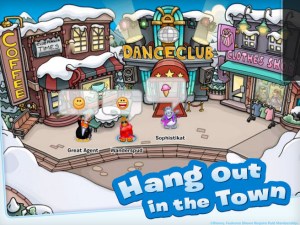 Above: Club Penguin’s town has a dance club.

Starting this week, Club Penguin will roll out the map from the online virtual world on mobile and regularly add new locations to the island. In the new areas, penguins will be able to hang out and role play like they do in the online world. They can also teleport directly to other rooms, such as their igloos, which are like a home base. You can collect stuff and store it in your igloo. And you can hold parties in your igloo. In the previous app, igloos were turned on in August and more than 100 million have already been created.

The world will also have new mini games including Pizzatron 3000 and Smoothie Smash, designed for mobile touchscreen play. Nine mini games are available. Heatherly said those have been polished and adapted for mobile, which means the game experience will likely be shorter, or more snack-like.

Heatherly said the architecture of the world is unique. The team built a web browser for gaming. That means the app itself is a thin client, and most of the gameplay and world is moved to the server. That means that Disney can update the game world dynamically on the server. The next time someone fires up the app, the world will be a different place. Disney acquired this proprietary server technology with the acquisition of Playdom, which in turn acquired from Metaplace.

Parents have the option of purchasing optional $7.99 a month recurring monthly memberships within the app. Those memberships will work on both the online web-based world and in the app. Heatherly said parents love that model because they can predict how much their children will spend in a month.

Heatherly said the existing companion app has become a significant driver for new accounts, with a third of the new Club Penguin accounts coming from the app.

He also said the app has the same safety technologies built into it. You can type chat messages in Club Penguin, for instance, but what you can say is tightly controlled. You can’t say any swear words, or words that can be repurposed as code for something negative. For instance, you can say, “I am at the beach.” But you can’t say, “You are a beach.”

Heatherly said that the team will update virtual items every month, without doing a client update on the iPad. An Android version is not available yet. An iPhone version is expected to debut in the first quarter. 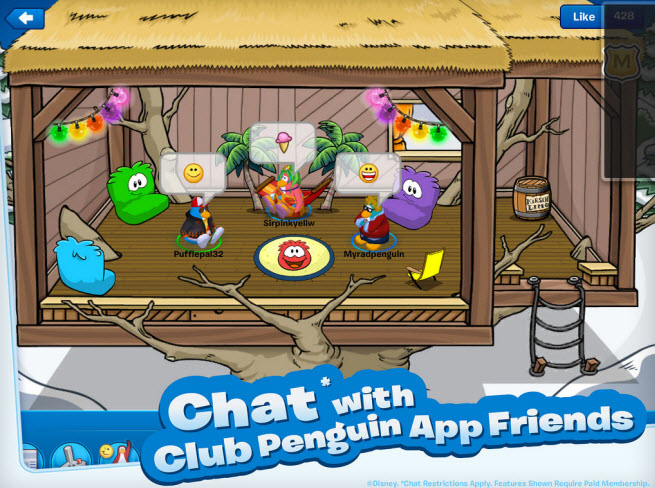 Above: Club Penguin app chat on the iPad