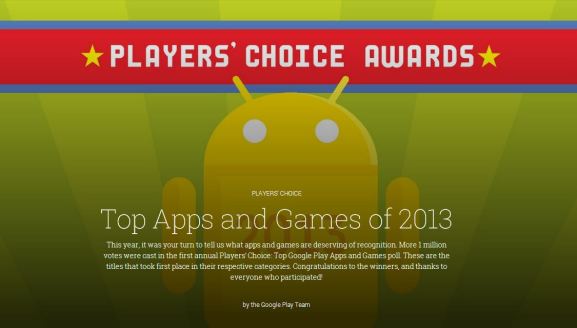 YouTube isn’t the only Google product capable of looking back fondly on a year’s worth of content. The people in charge of Google Play are doing something similar for the most popular games and apps on the Android market.

Google held the first annual Players’ Choice Awards to recognize the standout games and apps on the service. Google Play is the primary store for Android smartphone and tablet owners to download games for their devices.

To celebrate the end of 2013, the company had its customers vote to determine the most addictive title, the best movie-licensed title, and more on Google Play. Check out all the winners:

Knights & Dragons is a free-to-play action role-playing game. It has players going on quests to defeat enemies and collect loot while building up a kingdom. Bejeweled Blitz is EA’s popular match-3 puzzler that speeds up gameplay with timed rounds. The Hobbit: Kingdoms of Middle-earth is a city-building game based on The Hobbit film franchise.

On the app side, Duolingo is a language-learning program, Flixster is a film-review and ticket-purchasing app, and YouTube is the app version of Google’s popular video-sharing site.

In addition to the official categories, Google also gave awards to the games and apps that earned the most write-in votes. The following software didn’t win any specific category:

Ingress is Google’s location-based alternate-reality game that has players traveling to real-world locations to complete quests. Samurai Siege is another city-building title that has players amassing troops to fight with and against friends. NewsHog is an app version of Google’s News and Weather services. And SwiftKey replaces the standard Android keyboard with one that uses prediction software and other tools to make onscreen typing more intuitive.