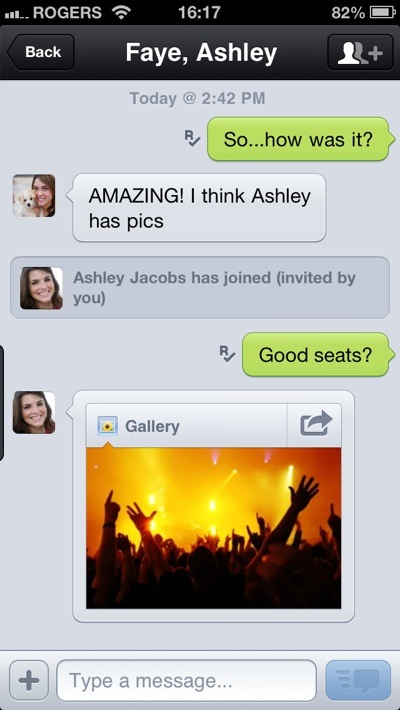 If you need further proof that something interesting is going on right now in mobile-messaging apps, just take a look at Kik.

Launched just three years ago, Kik announced today that it has reached a massive milestone of 100 million registrations, up from 30 million a year ago. The company’s focus on building its own ecosystem of HTML5 apps, called Kik Cards, has also proven successful with more than 145 million added since they launched last year. The Cards enable Kik users to do things like browse Reddit, doodle, and play games all without leaving its app.

Like most other messaging apps, Kik lets you send short text messages and photos to your friends. It gained notoriety a few years ago for its speedy messaging platform (it even threatened BlackBerry to the point that it was kicked off that platform).

Kik’s massive growth over the past year follows similar performance from its messaging competitors — WhatsApp has more than 300 million active users, while KakaoTalk hit 100 million registrations earlier this year. As more people get their hands on mobile devices, it makes sense that they’re quickly latching on to fast and free ways to communicate.

Kik hasn’t yet revealed its number of active users — which is typically more meaningful than registered user stats, since it tells you if people are actually sticking around — but founder and CEO Ted Livingston tells me it’s “very good.” The company is also adding 200,000 new people every day.

“The thing we’re really focused on is if can we be the company that ushers in the mobile web era,” Livingston told me in an interview this week. “The idea that that company can be Kik is pretty exciting.”

At the heart of his grand vision is Kik’s HTML5-powered Cards, which gives the company several ways to keep people inside of its apps, rather than losing focus to other apps on their phones. They also give Kik a clear differentiating feature from its competitors. Livingston tells me they’re inherently viral as well — the company has founded that 83 percent of cards are discovered by people when they’re referred by friends.

Since the Cards are basically web apps, Kik can roll them out easily across all of its apps. Kik can also push out updates quickly to its Cards, since it doesn’t have to wait for app store approval for web apps. One recent Kik Card game, Koa.la’s Costume Party, reached 1 million players in 22 hours.

Kik isn’t making money off of its Cards yet, but there’s certainly the potential for something interesting here. For now, Livingston tells me the company is making money from selling stickers (which he describes as “disappointingly affective”) as well as a cut from the in-app payments of Zynga’s “1 Word” Kik Card game. The Waterloo, Ontario-based company has raised around $27.5 million so far.

By building its Card platform, Kik is taking a different approach from other mobile messaging apps like Line and KakaoTalk, which point users to recommended apps and games. Tango, a major competitor, is now focusing on bringing its messaging platform to mobile games.

“The big thing about Tango and Line and all these guys … it’s not a platform — it’s an ad network,” Livingston said. “At the end of the day, they’re showing a list of apps you should install. We saw the same thing. But in terms of actually making the messaging experience better, it doesn’t do that.”