Finding the things you want on the Internet on a regular basis can be hard. As you search for things you are interested in or try to remember a web page that you visited before, you may wind up with 20 web pages open and no path to get back to them easily. 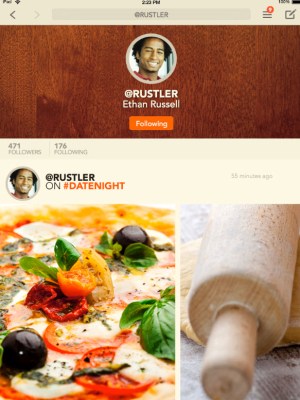 Above: N3twork lets you create your own profile

That’s why Neil Young and Bob Stevenson, the cofounders of mobile gaming firm Ngmoco, created N3twork, (pronounced “network”) a startup with a new social network based on your interests. The app is launching today.

“We started the company with the mission to rethink the way we consume the Internet’s content around our interests,” Young said in an interview with VentureBeat.

The foundation of the N3twork app is very different from Facebook, which organizes itself around the idea that you are interested in what your friends are doing. But N3twork looks at social through an interest-based channel rather than friend-based one. You can meet new people who are interested in the same things as you are through the process of sharing things on N3twork. You don’t follow people. You follow interests like Xbox One games or Bruce Springsteen songs.

The experience is designed for the visual richness on the iPad, though you can use an iPhone as well. Young showed it to me in a demo at the San Francisco company’s offices, and I tried it out on my own as well. You can easily create your own personalized Internet experience that allows you to more easily share multimedia content and discover it.

You can type a keyword such as “games” and N3twork will automatically populate it with high-quality videos or images that you can bring into your own post. You can give it a headline and make commentary on it, essentially taking a generic piece of Internet content and making it your own. The content can be a story, photo, video, link, or anything clipped from the web. N3twork packages that into a compact “element,” which you can share. You can take that post and assign it to #Channels that are venues for public conversations around your interests. You can do all this with touchscreen controls.

You can also view N3twork content on your TV using the AirPlay feature of Apple TV, which projects the image from your screen onto your TV screen. Young did that with his wife’s family, and they spent an evening looking at images and videos related to the history of San Francisco. The Channels can be anything. If you like something you see elsewhere, you can repost it to your own Channels and add comments. You can share posts via email, text message, Facebook, and Twitter.

Young has taken the trouble to do this because he has been dissatisfied with the web. 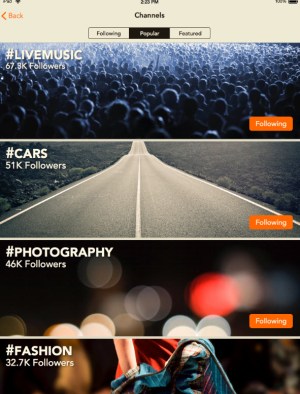 Above: A N3twork channel view.

“It’s a 20-year-old construct, and it is getting pretty old,” Young said.

It is not organized in a way that humans can grasp it, and N3twork wants to change the model of web pages and portals that has been around since the 1990s. When you search for content, you get a list of links, many of them not relevant to what you want. You keep opening new pages to find what you want, and you keep them open in case you might need them later. As an example, Young had a bunch of web sites open on a recent election night as he waited for results to come in. But all he really wanted to do was follow the election. With N3twork, he can do that.

When Facebook and Twitter came along, the “internet of people” came into being. The social web lets you find out what your friends are up to. But what if you want information about a topic, whether your friends are interested in it or not? The hashtag on Twitter helps organize things based on interests, but it’s pretty hard to catch up on a topic by reading through a bunch of tweets.

“We are in the waning years of the social web,” Young said. “The question is, what is next and why?”

It will certainly be hard to beat someone like Facebook, which has more than a billion users. And there are rivals like WeChat, Kakao, and Line in Asia. But Young believes his service can focus on user engagement, not just large numbers of users.

Young wants N3twork to become the third major stage of the Internet, or the “Internet of interests.” For N3twork, the new canonical object is the Channel, which maps to a hashtag. And those Channels are built in a visual way, so they are much more interesting to look at on an iPad than something like Twitter. Examples of channels include #news, #running, #travel, #thatthingwedidlastnight, #yourhighschool, #yourworkplace, and #yourlife.

N3twork has natural e-commerce built into it. If you enjoy Leica cameras, you can follow the interest group for it. And when you browse through cameras, you’ll see a tag on the lower right hand side that takes you to a site where you can purchase the camera. N3twork makes affiliate sales commission from those purchases, but it doesn’t clutter up its experience with ads.

“When you are focused on something, an ad feels relevant,” Young said. “It doesn’t feel like an ad.”

N3twork is very different from question-and-answer sites like Quora, since it is a lot more visual. It helps you remember things like Evernote does, but it isn’t simply a memory augmentation network. You can unfollow something with a tap. You can create a profile of yourself that includes all of the things you have posted. The links to the original content are preserved, so N3twork believes content owners will like what it’s doing.

“The software we are releasing is the seed of what we hope to grow into,” Young said. 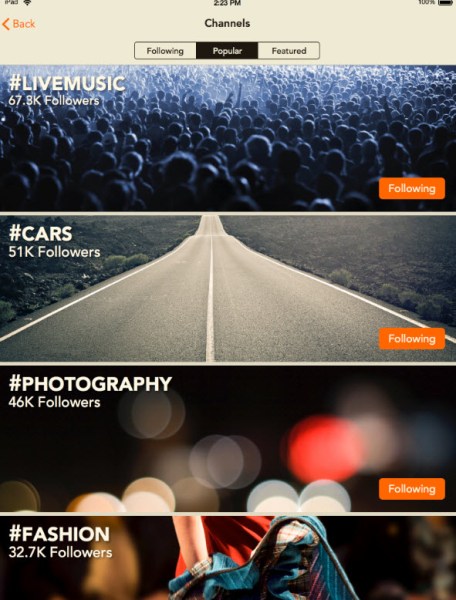 Above: A N3twork channel view.