Cyberbullying has become a major cause of teen depression, leading to teen suicides and others problems. Game developer Pixelberry Studios is aware of this issue and is trying to draw attention to it — and its solutions — through a major episode in its game High School Story. On top of that, it is donating a portion of the in-game purchases of virtual currency to a charitable foundation aimed at preventing cyberbullying.

It’s not common for a mobile-game developer to take a stand on such a serious issue. But Pixelberry’s High School Story is a different kind of game: a story-based, cartoon-like interactive novel. It has narratives that show kids what it’s like to be in high school, almost like a simulation. It has had more than 4 million downloads since its launch in August, and it has a good sense of humor. But that doesn’t mean it can’t take on a serious subject.

In an episode dubbed “Hope’s Story,” Pixelberry’s team shows what it’s like to suffer cyberbullying. It’s about a girl named Hope who goes to a party and meets a boy. She likes him, and she thinks he’s available. So she kisses him. But it turns out that he has a girlfriend named Chelsea, who finds out. Then she takes out her wrath on Hope by getting all of her friends to send nasty text messages to her. Hope gets depressed, and that’s where the player steps in. The question is how to get her help. More than 400,000 players are currently playing the weeks-long quest. 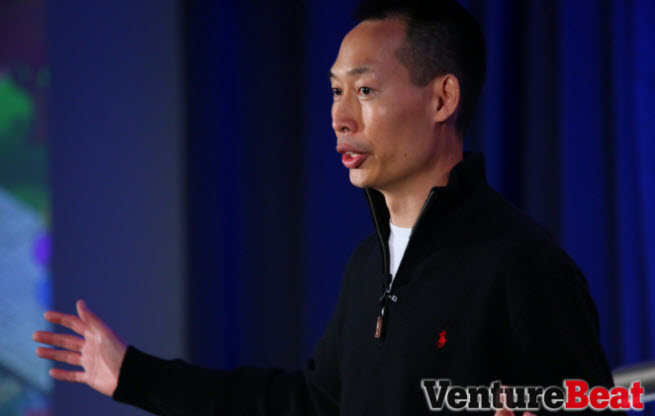 “It goes through an emotional arc,” Oliver Miao, the chief executive of Pixelberry, told GamesBeat. “We wanted to make it impactful. We’ve had a lot of players write into us and tell us how touched they are.”

Miao said the story follows a common high school entanglement and presents her with options, like preserving evidence and getting help from a parent, school authorities, and others. Too often, some teens turn to suicide because they feel like they’re alone and no one will help them. In fact, stats from a 2011 survey by the Centers for Disease Control showed that one in six teens say they have been cyberbullied, and 81 percent of them think it is increasing. Almost half of them think that current cyberbullying initiatives and resources are ineffective. The suicide of two teenage girls, Rebecca Sedwick (a criminal case against the alleged bullies was dropped) and Audrie Potts, has drawn national attention to this problem.

Based on the stats, Miao said the company estimated that 80,000 of its own High School Story players could attempt suicide this year. That brought the notion home that Pixelberry should do something about it. 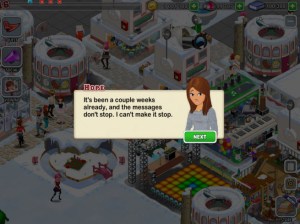 Above: Hope is bullied

With so much attention on cyberbullying, the writers of High School Story realized that they couldn’t act as if they were making their game in a vacuum. Eight members of the 15-person team are writers, and Miao calls them very creative. Hope’s Story is one of a hundred quests they have created. Some of them have been together not only at Mountain View, Calif.-based Pixelberry but also at Electronic Arts.

Miao and Pixelberry co-founder Winston She also co-founded Centerscore, a mobile game studio that they sold to Vivendi in 2006. They moved over to EA Mobile, where they worked with Keith Emnett on making the hit game Surviving High School. But EA decided to cancel their next game. Miao, She, and Emnett formed the new company, Pixelberry, in 2012 and launched High School Story this summer. The game reached as high as No. 5 on the top games on the Apple iTunes App Store, and it is frequently in the top 50. It has more than 500,000 daily active users, or people who come back every day. The retention for the game is extremely high.

The game is personal to Miao, who noted in a talk at our GamesBeat 2013 conference, where Pixelberry was a finalist in our contest for the best game startup, that his team had been contacted by a girl playing the game. She said she had suicidal thoughts. The team was already knee-deep in writing the cyberbullying episode, and they helped her get professional help.

“One thing we tried to do was keep it realistic and engaging to the players, but also educational,” Miao said. “If someone is experiencing being bullied themselves, they are learning what they can do. You may feel like you’re alone, but there are likely friends and family around you who really care. You don’t have to face your problems yourself.”

On top of that, Miao said he was also bullied when he was a teen in junior high. He was a skinny and nerdy seventh grader. An eighth grader would take out his aggression on Miao. Whenever the teacher left the class, he would pick up Miao and dangle him over a trash can. He never told his parents about that as he thought it would just make things worse. But he realizes in hindsight that he could have taken some action, and that is what “Hope’s Story” conveys.

“Teens spend huge amounts of time playing games, and it’s wonderful to be able to provide the help, support, and resources that they need to deal with cyberbullying through High School Story,” said Cybersmile founder Scott Freeman. “The money that Pixelberry is donating to Cybersmile is an example of how games can not only serve to teach teens but also support charities like ours and tackle larger social issues. The support of Pixelberry is enabling us to reach more victims of cyberbullying. With the money they are raising, lives have been and will continue to be saved.”

Miao hopes that Pixelberry can reach more people with the message because it is speaking to them through a medium that they love and understand: games. The age range for the title is about 14 to 24.

“We’re really enjoying that we can affect a number of lives with this, and we hope we can partner with Cybersmile for a while,” Miao said. “We have been raising money faster than we expected, and that goes directly to their cyberbullying help line. I think it would be great if we could do this long-term. 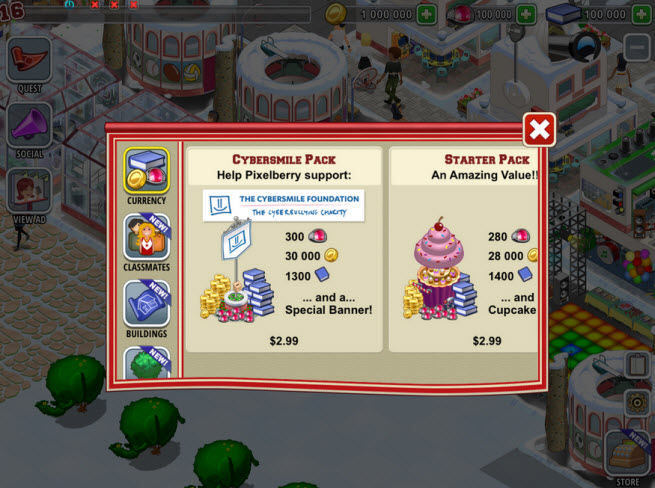 Above: You can help stop cyberbullying by buying virtual items in High School Story. Proceeds will be donated to Cybersmile. 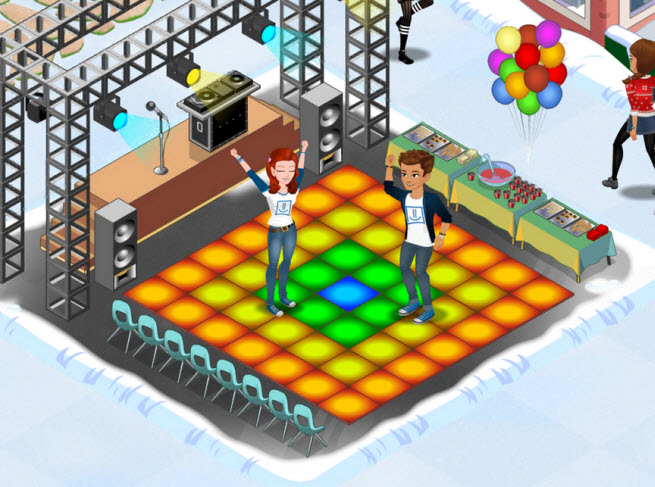