Empire Avenue is a social network where you can “invest” in your friends by buying their shares in a virtual stock market. And now, if you complete a social media mission, you can earn a new virtual currency that you can use to buy digital goods.

It’s a new twist on an airline loyalty program, where members who are the most active will receive the most rewards. Now you can earn some real-world rewards based on your participation in social media missions created by fellow members.

“We’ve created the equivalent of airlines miles and credit card reward points for social media,” said Duleepa “Dups” Wijayawardhana, co-founder and CEO of Empire Avenue. “Empire Avenue was built on the premise that people should be able to capitalize on the value of their reputation, relationships, and social media skills. So by allowing people to exchange points that can be used to buy digital goods, we’re just rewarding people for being themselves.”

Edmonton, Canada-based Empire Avenue is one of the companies that is “gamifying,” or using game mechanics to spur non-game activity, the idea of being popular in social media circles.

The company has also opened a new digital marketplace where users can purchase digital music, movies, and e-books using virtual rewards points called “Vees.” Empire Avenue members can purchase this currency with real money and give it away to people through missions. This pays off for the members because it drives engagement, advocacy, or awareness of something they want to promote.

Above: Empire Avenue has dual currencies in Eaves and Vees for its social members.

Anybody can create their own social media mission. I created one where I gave away virtual currency to players who read one of my stories about a charitable effort to raise money for a foundation that fights cyberbullies. I gave the mission a description and explained why sharing it would do some good. A certain number of people who clicked on the link and shared. In turn, they received the virtual currency points which they can spend as they wish. They can then visit the marketplace and buy digital entertainment goods there, from Starbucks give cards to music. The result, as you can see in the chart, is that I became a lot more popular very quickly. 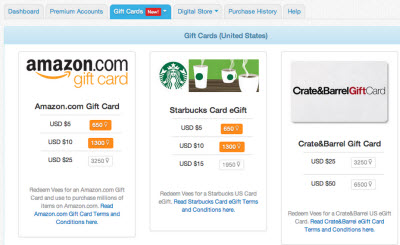 Above: Empire Avenue gift cards you can buy with Vees

The Vees currency and its digital marketplace are a complement to Empire Avenues original in-game currency, dubbed “Eaves,” and the community’s Social Stock Market. Members can use the Vees currency for digital goods and services, while they can use Eaves to create social media missions for other participants, invest in the stock for other members, purchase analytics, and engage with social mavens in Empire Avenue communities.

“Eaves are all about access to people and networks,” explained Wijayawardhana. “They are still the key to measuring and exchanging social value. Vees, however, offer a concrete way for Empire Avenue members to profit from everyday social media activity. People can earn Vees for doing things they already do on social media sites.”

Eaves are an inflationary currency that cannot be taken out of the game. Vees, on the other hand, can be cashed out through the digital marketplace rewards.

Empire Avenue has members from over 100 countries and spend an average of 18 minutes on the site per day. I joined Empire Avenue early on and made a few “investments” in my colleagues from the media. I made some good bets and have seen my portfolio’s value grow to 973,518 Eaves. One good thing is I didn’t have to log in every day to get that wealth. I also have a number of shareholders who each own a piece of me.

The site determines your value based on your social currency, which tracks metrics for your social standing on sites like Facebook, Twitter, YouTube, LinkedIn and Flickr. The company will use the money to grow its team and expand its platform. The company says it is generating “strong revenue” through the sale of virtual goods, currency and partnerships for branded virtual items and achievements.

“The marketplace is where it all comes together,” Wijayawardhana said.

Wijayawardhana founded the company in 2009 as a way to help people benefit from the work they put into their online presence. The idea is to enable people to embrace their own personal brands and make new connections online.

Above: Empire Avenue let me promo a story with Vees.