Nimble Storage (NMBL), which makes a flash-optimized hybrid storage platform, just made its debut on the New York Stock Exchange — and market sentiment is hugely positive.

Following this morning’s price discovery period, Nimble’s stock opened at $31.10, more than 48 percent higher than its initial offering price of $21 per share. Within the first 10 minutes of trading, shares sold in a range of $29.56 to $31.49. The company is currently trading at $31.54.

Nimble sold 8 million shares, raising $168 million at a market valuation just below $1.5 billion. At $31.10, the storage firm would have a market capitalization of more than $2.1 billion.

Investors appear willing to pay steep multiples for Nimble due to its substantial growth and the strength of its proprietary storage architecture, which combines flash and disk storage to compress data in real time and back up data as it’s processed.

“It’s very different from any other architecture in our industry today,” Nimble Storage CEO Suresh Vasudevan told VentureBeat in a phone call. “The beautiful thing about Silicon Valley is that … a small group of people can build technology that disrupts giants.”

Nimble Storage competes with major storage incumbents like EMC, NetApp, and Dell. Prior to the IPO, Nimble had raised a total of $81.7 million in funding from Sequoia Capital, Accel Partners, Lightspeed Ventures, and others.

Nimble seems like it will have a much smoother IPO than Violin Memory (VMEM), another flash storage company that went public in late Sept. at $9. Since its rocky open — the stock dropped 20 percent in its first day of trading — Violin Memory has suffered in the markets: It’s currently trading at $2.71.

Over the past three years, Nimble has ballooned from 30 to 600 employees. It will use the funds raised from its IPO to continue its expansion, with a major focus on sales and marketing efforts.

“For all of us at Nimble, this is a great moment. But we also see this as the beginning of phase two. We’re all excited to get working on the next phase — well, maybe after taking a break on the weekend,” said Vasudevan, laughing. 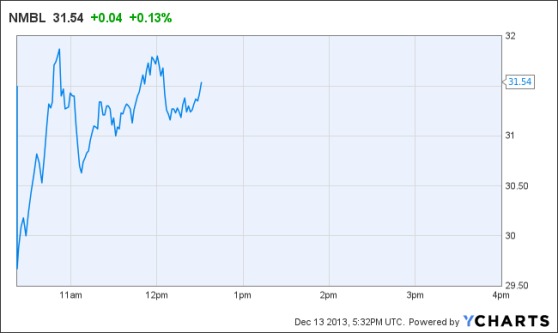 Updated at 9:36 AM PT with above image and revised current trading price