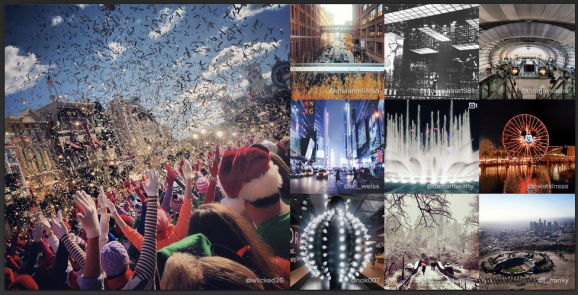 The most Instagrammed location in the world is (drumroll please) — a mall in Bangkok.

Instagram released its end-of-year data today, revealing fun tidbits about the most popular locations, the most liked photos, and top hashtags.

So taking photos of large, generic, public locations is clearly a big thing in Thailand.

Times Square came in second for locations, followed by Disneyland, Bellagio Fountains in Vegas, and Disney World. New York is the most Instagrammed city of 2013, followed by Bangkok and then Los Angeles.

The most liked Instagram of 2013 was a photo from Justin Bieber (again, how disappointing), attracting 1,496,070 likes. The picture is of him with Will Smith, dubbed “Uncle Will.”

Thanksgivingukkah, otherwise known as Thanksgiving and the first day of Hannukkah, was the most Instagrammed day of 2013. This was an illustrious occasion, as the two events have not shared the same calendar date since 1888 and won’t again for tens of thousands of years.

Never again will it be appropriate to eat cranberry sauce on your latkes, sweet potato noodle kugel, or pecan pie rugelach.

The top hash tag of 2013 is #love. You saps. Other top hashtags were #tbt, #friends, #fashion, #food, and #selfie. You can check out some of the fun #love Instagrams here, here, and here.

Instagram now has 150 million users. 55 million Instagram photos are uploaded every day, and 60% of Instagrammers are sharing photos from outside the United States. More than half of users open the app daily.

Yesterday, the wildly popular photo-sharing app unveiled Instagram Direct, a new feature that lets people share photos with specific people or groups rather than to the world.

Instagram is far and away the dominant photo-sharing app for smartphones. People have risen to fame and fortune, and made careers off of Instagram photography. This data is an interesting glimpse into where people went and what people did in 2013, which shall go down forever as the year of Bangkok and Bieber.