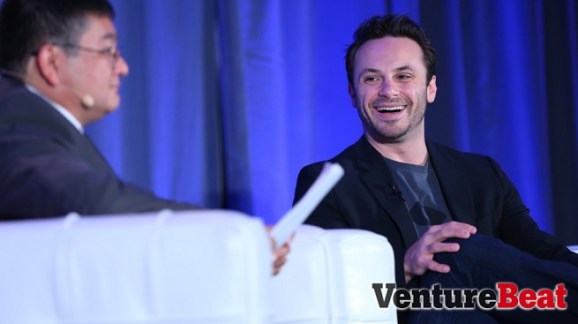 Oculus VR, the maker of the Oculus Rift virtual reality goggles, has had a whirlwind startup life that has taken it from an underdog of the gaming business to a viable alternative platform.

Its demo won numerous awards at trade shows and the company proceeded to sell more than 40,000 development systems to game developers at $300 each. It raised $16 million in the summer of 2013, but also tragically lost a co-founder in an accident.

Many people doubted whether Oculus could bring its technology to the consumer mass market, given the competition from the next-generation consoles from Microsoft and Sony.

But Oculus gained some big credibility this week: As VentureBeat first reported, the company raised $75 million in a funding round led by Andreessen Horowitz, one of the most powerful venture capital firms in Silicon Valley. Now Iribe has the clout and money to build a real ecosystem around Oculus Rift and get game developers to make unique virtual reality games.

Most startups don’t live such an accelerated life. But Iribe, who spoke at our GamesBeat 2013 conference earlier this year, paused to speak with us this week about the latest funding and the company’s vision for a new, sleeker version of its headset. Here’s an edited transcript of our interview.

GamesBeat: So does this mean you’re closer to shipping a commercial unit that’s not going to make you seasick?

Brendan Iribe: Weird way to ask the question. [laughs] We’re always improving the experience. The technology recently has taken a pretty big leap. We call it a bit of a breakthrough in comfort. I spoke about that your conference, when we did our fireside chat. There’s been a big jump in the overall technology and the headset itself.

When you put it on — the latest internal prototype, which is what Marc Andreessen and his team saw – it’s a completely different experience from the previous versions. The latest one finally ties it all together. There’s this switch in your head. Your brain, instead of feeling like you’re looking through a VR headset, suddenly feels like you’re just looking through a pair of glasses into another reality. It’s much more comfortable.

We’ve had about 300 people try the latest prototype, including Marc and [Andreessen Horowitz investor] Chris Dixon themselves. [Game designer and executive] Brian Fargo just tried it and tweeted a little about it. Everyone who’s tried it has walked out saying, “Oh my God, that’s it.” Some people may have said, about the previous versions, that they had some issues or that they didn’t feel so great. But this one, they’re saying, “I feel great. If you guys deliver that quality of experience to the consumer market, this thing is going to be a lot bigger than anyone expected.”

We feel that way too. Marc and his team all had the same reaction. This could be much bigger than we all expected. We’re now trying to scale up. Of course, we had dreams of how big it could be, but we try to be realistic. We try to have realistic expectations. The developer kits and previous incarnations still had challenges, whether it was resolution or latency or motion blur or tracking. The latest prototype solves most of those well enough to have a comfortable experience.

GamesBeat: Are you proceeding down a path that’s following Moore’s Law? Or are you redesigning it still, coming up with different kinds of technology or materials?

Iribe: It’s going to be a similar form factor to what we’ve been thinking about since the beginning. You still strap it on. That form factor is similar to many of the VR headsets that have been out there in the past. We’ve just taken a unique approach to use a single screen internally and really hit the optics right.

The biggest thing that we’ve solved is the latency challenge, and the tracking. It wasn’t until recently that you could solve these problems with modern hardware. We were looking at latency in previous devices around 100 to 200 milliseconds. That’s tough for anybody to stand. We got our developer kits — the prototype that you saw way back when, at the last CES — running at about 60 to 70 milliseconds. Our most recent internal prototype is now between 10 and 20 milliseconds. Less than 20 [milliseconds] flips the switch and you cross that threshold where the brain feels comfortable with it. You’re not reminded you’re looking at a computer device.

Above: The Oculus Rift headset. It’s coming to mobile devices, the company announced at GamesBeat 2013 today.

GamesBeat: The amount of money here, can you talk about that? How is it going to help you get the goggles out? When you think about launching a console, that sounds like a small amount of money, but launching something different, it does seem like a lot of money.

Iribe: We’d of course like to see two million units in a few days. [laughs] But again, we try to set expectations realistically. We’re a startup. This is a new device. It’s a full platform that we’re looking at launching, but it’s a platform that requires a computer and the headset. We’re looking at the right way to sell that to consumers. We want to make sure everyone has a great experience. When they buy the product and take home and plug it in, we want to make sure that first experience is comfortable and everything is there.

We’re looking at how many units that might be at launch, and how much money we would need to cover that. If we were going to see millions of units at launch, we’d undoubtedly need even more money. But with the expectation we have for the pre-order launch units for consumer V1, we should now have enough money to build that inventory and ship that alongside a healthy amount of pre-orders. We’ve seen that already with the developer kits.

We feel like we have a good grip on it. We’ve pitched the road map to Andreessen and the other partners. Everyone feels comfortable with it. It could always change, of course. We set out a road map of how many developer kits we’d like to sell and when we’d get things done. So far we’re tracking closely to that. Hats off to the team and the community for showing up and helping us. We’re getting there with V1. It should be a good launch.

Virtual reality — and Oculus, now, because there’s nothing else like it — is what the next generation is going to be all about. When we look back on 2013, 2014, the next two to three years, I’m confident that people will remember that the big change was Oculus. There may be a few more that launch and compete, which should be exciting. Hopefully they do as well or better as we do.

We’re finally going to be free of the 2D monitor. It’s been a window into virtual reality that we’ve all looked into for 30 or 40 years. We’ll have goggles at the beginning. Down the road, a decade or so from now, you’ll get a nice pair of sunglasses and look out into virtual reality. There’s a lot of opportunity beyond gaming as far as where this will go.