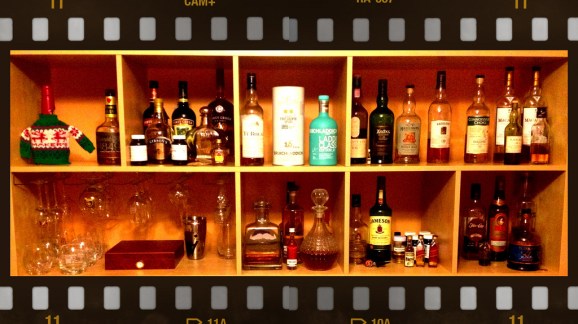 A cabinet full of whiskey.

As far as I’m concerned, whiskey — or Scotch whisky — makes the perfect present for any occasion, yuletide or otherwise.

To help out people like me and our loved ones, Distiller has launched what it claims is the first-ever “whiskey recommendation engine.”

I answered a few questions — where I want to drink (by the fire, in a bar, etc), how adventurous I’m feeling, and how much money I want to spend — and the “engine” spat out the recommendation that I pick up a fifth of Old Grand-dad 114, the extra-strong, 114-proof version of a reliable Kentucky rotgut that I know vaguely, and would probably never drink again. Maybe not the best recommendation, despite the enticing tasting notes that described it as “spicy and oily.” Like an extra-strong al pastor taco, perhaps? Next!

I tried again, and this time it suggested Knob Creek Rye, the rye version of a whiskey I love, which Distiller described as “full-bodied and rich.” Sure, I’ll try that! I’m pretty sure it’s at Costco, too, so I’ll pick some up the next time I’m there.

Unfortunately, the recommendation engine is rather simplistic — it’s basically a simple questionnaire that drives you to a limited number of results. It also seems to have a paucity of single-malt Scotch on it, which is in my opinion a debilitating shortcoming. It’s also the area of spirits where drinkers are most in need of guidance, as Scotch can vary widely in its taste, and is often an intimidating flavor for newcomers. So for your version 2.0, Distiller, please consider a Scotch guide.

In the meantime, here’s an infographic from Distiller that can help you pick the perfect spirit, holiday or otherwise.

Above: Distiller’s holiday guide to whiskeys. (Click for the full-sized image.)