If Trip Hawkins’ new game takes off, it would be a more satisfying outcome for the founder of Electronic Arts than creating Madden NFL football, designing the 3DO game console, or creating mobile games with Digital Chocolate. That’s because the emotional stakes are high with his startup, called If You Can, and its game, dubbed “IF…”. 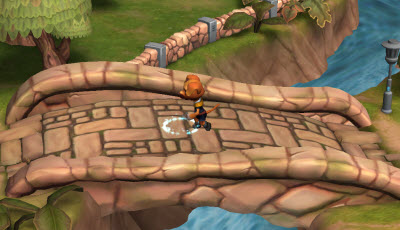 Above: IF… takes place in a magical fantasy world of dogs and cats.

Hawkins told GamesBeat in an interview that his new project is educational, and it supplements learning in schools by focusing on subjects most of them don’t teach: social and emotional development. IF… is a fantasy simulation/role-playing game where kids try to walk in the shoes of an animated character who has to learn how to be sensitive to other living beings and how to deal with his or her own powerful emotions.

It is by no means a normal video game or a normal classroom subject, and that’s why Hawkins believes it will be unique and entertaining — at the same time it teaches kids how not to bully or be bullied. If Hawkins can make IF… succeed, he’ll feel like he has made a contribution and completed an emotional arc in his own personal odyssey.

“I’ve had my own journey,” Hawkins said. “Materialism doesn’t make you happy, but compassion does. It’s something that makes you want to build your life around. That is the fundamental point of social and emotional learning. It is shifting our value system away from materialism and toward compassion.”

IF…, coming out on iPad, is mostly for kids ages six to 12 years old, with the target being the impressionable ages of eight and nine. The game is really a parable that lets you walk a mile in someone else’s shoes. You start as an animal person who runs into situations that help develop his or her character, learning to make moral choices and develop a compassionate attitude toward others.

“Parents are looking for things that are more useful than an ordinary game,” Hawkins said. “They have electronic babysitters, but they are despondent because they feel games are killing brain cells.”

Hawkins hasn’t set a date for shipping the title yet. He has teased it before, but now he’s finally describing it in more detail. 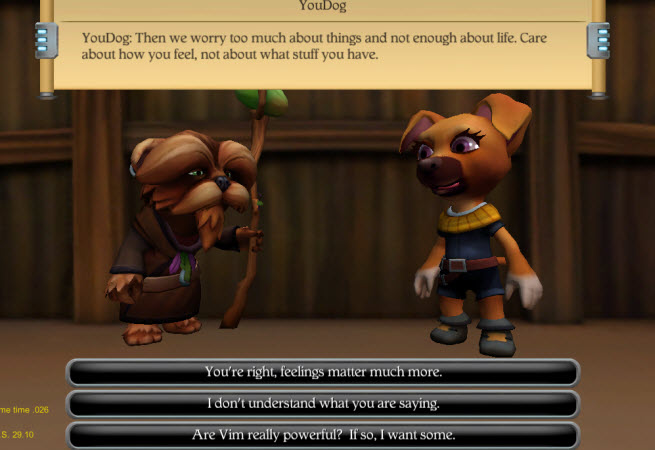 Above: An elder dog character YouDog helps the player make the right decisions.

What the game is about

IF… isn’t just a thinly disguised parable. Hawkins knows the mistakes that educators made in designing “edutainment” in the 1980s and 1990s, and he’s trying to avoid the pitfalls by making a great experience.

“It’s no fun if the kid smells the spinach,” Hawkins said, referring to parents’ trick of putting spinach in something that tastes good.

The title uses the Unity 3D engine for the Apple iPad. Much of the content will be free, but at some point, a subscription fee will kick in. The game splits into chapters.

In IF …, two tribes don’t get along, the dogs and the cats. The long-term goal of the game is to unite the warring factions. 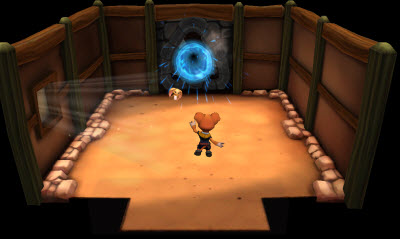 Above: The player sees a portal with the help of a Vim.

The chapters impart lessons about things like what is an emotion, how to recognize what someone else is feeling, how a conflict can escalate and what are the tools to calm it down, how to disagree with someone and still stay friends, and getting people to act in a more compassionate way.

Kids will play through scenarios that teach lessons about topics like bullying.

“If you can manage your emotions effectively, you can function and deal with a bully more effectively,” Hawkins said “If you are a bully, you are coming from your own wounds. The hope is a bully can examine their own feelings and emotions and become more aware.”

Players will also encounter scenarios where a dog character has to babysit some cats. It’s similar to a classic lesson (known as Stanford’s Zimbardo Prison Test) where some students are prisoners, and some are prison guards. The interaction that happens between them teaches kids something about empathy. If you are mean to the captives, you might find later on that they capture you. How they treat you depends on how you treated them.

The game also introduces Vim characters, which have a kind of spiritual energy. The Vim are in danger, and you have to find a way to protect them. You can’t catch them and own them. But you can befriend them, and they will use their energy on your behalf. If you are nice enough, a Vim will become your constant sidekick. You need to master how to communicate with Vim, and you can train your character to work with one, like a Pokemon trainer.

Once you’ve done some training, you can go off and do missions with your Vim. You make progress if you do things like help a mother get reunited with her baby.

During the game, one character tells you that feelings are like layers, and that if sort through them, you can understand how you feel. That’s another classic SEL lesson. If your character starts feeling a lot of conflict, it will float in the air, in an analogy of how conflict can escalate. You can do things like breathing deep to bring your character back down.

IF … takes place in a town that mixes elements of Pokémon, Animal Crossing, and the Jimmy Stewart film, It’s a Wonderful Life. You’ll have to do things like clean up litter and build a recycling center. Your character is in charge of repairing the town. Hawkins says the game will have a strong story.

“The story is a key element here,” Hawkins said. ” People remember info better if they learned it from a story. Stories have drama and characters. That’s the power of myths, legends, and fairy tales.”