Microsoft’s Halo fans got a pleasant surprise when the company announced last week that it would make its Windows Phone 8 game, Halo: Spartan Assault, available as a downloadable title on the Xbox One video game console on Dec. 24. That means you’ll be able to get your Halo fix for the holidays.

The game is a remake of the tablet and PC version, which came out in the summer. but it has an interesting new co-op mode where two players can team up over Xbox Live against hordes of The Flood, the popcorn-like vermin race that Halo fans just love to massacre. The Flood typically come at you from all directions and keep on doing that until you run out of ammo. The game also has a single-player campaign story set between the events of Halo 3 and Halo 4. In the war with the Covenant, the game features the first missions of the Spartan Ops program and the rise of commander Sarah Palmer.

We caught up with Mike Ellis, lead designer of Halo: Spartan Assault at Microsoft’s 343 Industries game studio, in a recent interview. He tells us the 30 missions in the game are going to look beautiful and run natively at 1080p and 60 frames per second on the Xbox One. Here’s an edited transcript of our interview.

GamesBeat: Can you describe what you’re doing differently with the Xbox One version of Halo: Spartan Assault? 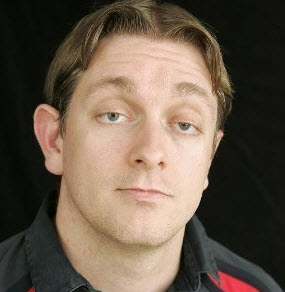 Mike Ellis: When we did the original game, it had 25 campaign missions split up into chapters. We then bolstered that with an additional five missions in the Operation Hydra pack. What we’ve done for the console versions of the game, we’ve packaged that up, so you have a 30-mission campaign, and then we’ve created five new cooperative missions for two players over Xbox Live, exclusive to the console version.

For those missions we’ve brought back the old enemy, the Flood, whereas the campaign focuses on the Covenant. Players will fight against the Flood with a host of new weapons, including the BR, the grenade launcher, and for the first time we have the machine pistols. We also have new armor abilities like teleport, or one that allows you to drop a gas cloud that the Flood can’t penetrate. You can use that to protect yourself from being overrun, or even drop it in specific locations on the map to deny them access to particular routes.

We’ve also revised all the medals and achievements, and spent a lot of time configuring the game to make sure it feels native to the new controller. For Xbox One we’ve embedded functionality in the rumble triggers.

GamesBeat: Did you have this planned out a while ago? Or was it the success of the game that led you to do the Xbox One version?

Ellis: Originally the project was meant to be for Windows 8 platforms — phone, tablet, and PC. We were just so happy with the results that we thought the game would translate very well to console, and so we set about converting it over. Obviously the Halo fan base is so large that we want to make sure we’re reaching as many fans as possible, as well as making new fans with this game.

GamesBeat: The earlier versions of the game racked up about a 71 out of 100 on Metacritic (for PC version). Did you absorb some of the criticism there and think about that for the Xbox One game?

Ellis: Definitely. We’re always concerned with making the controls as intuitive and responsive as possible. When we were first thinking about converting the game over to console, we spent time on the controls, making sure they felt good and were going to natively work with the console version, as opposed to the touch controls you saw on the phone or the tablet.

We also used our business intelligence and metrics to do some rebalancing to the game. We’ve done some tuning, balancing, tweaking of the scoring and the thresholds necessary to get the bronze, silver, and gold stars.

Ellis: 343’s looking to have Halo experiences in as many formats as possible. You can look through our portfolio now. We have games. We have books on the New York Times bestseller list. We have toys and things like Mega Blocks and McFarlane figures. Halo is bigger than any one game. We see it as an entire universe of experiences. 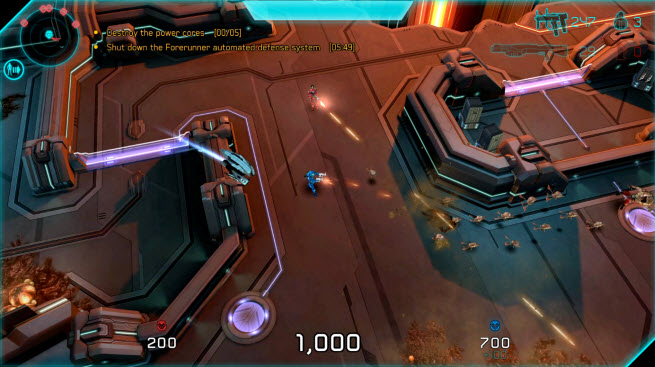 Above: Halo: Spartan Assault co-op lets you defend against the relentless Flood attack.

GamesBeat: How do you try to translate that touch control into button-pushing on a game pad? What exactly is controlling what now?

Ellis: The controls break down so that the left stick controls movement. The right stick still controls aim. One slight change we’ve made is that the player also pulls the right trigger to fire, which is a tweak you didn’t have in the touch versions of the game.

GamesBeat: You were always firing when you were moving, right?

Ellis: Yes. In the touch versions of the game if you were pushing the right stick in a direction, you’d be firing in that direction.

GamesBeat: How is that different from a Halo game’s normal controls?

Ellis: In a standard Halo first-person shooter, you would move with the left stick, yeah. You would kind of aim with the right stick, although you’d be aiming the game camera as opposed to your character. It’s similar, but different. We still have controls for interacting with the world, changing primary and secondary weapons, changing grenade types. There are a lot of similarities between the games, but there are still some differences given the genre.

GamesBeat: Can you talk about designing the co-op experience and what you wanted to achieve there?

Ellis: I think we have a very cool complementary set of missions there. They play very differently from the main campaign. The main missions have multiple objectives. They have that driving force of exploring the map and finding the objectives and completing them. When you’ve moved away from the Covenant and toward the Flood, though, the pace ratchets up. It’s about the two players working together to ensure that they both survive.

We have lots of little co-op mechanics in play. Players are able to assist each other with how they move and how they fire. They can use different armor abilities to help each other. I could throw down something regens both of our health. We have a cooperative form of turret in some levels. I can fire my sentinel beam at the Flood, which is a very effective weapon, but it needs power and it very quickly runs out. The second player can go step on a charging pad, though, to supply power to the turret while it’s in use.

Or players can stand on a button that lowers a special force field, in order to advance through the maps. We have a mission where we’re both guarding a fortress. The combat forms of the Flood are very dangerous. They’ll throw grenades or shoot at you from a distance. What I can do is let you out of the fortress by stepping on that button. You can go clean those guys out and then escape back into the fortress while I slam the door shot on all the infestation versions of the floor.

We have a core mechanic where players can be infected by the Flood. They’ll climb on your back and very quickly drain your shields. The way to get rid of those would be for you to shoot them off my back or melee them off. The characters have a very symbiotic relationship. It’s a lot of fun. I spent all of yesterday just playing through co-op missions.