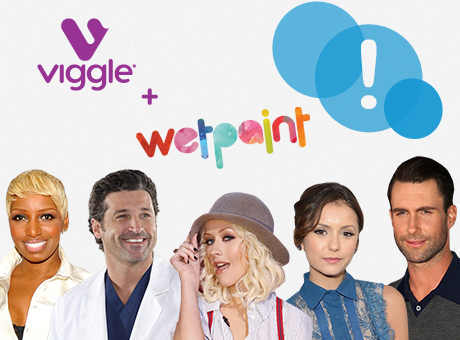 Viggle uses game mechanics to entice people to check-in to its service while watching live TV shows, and rewards them with stuff for incentive. Wetpaint has a much larger crop of regular users than Viggle (12 million unique monthly users vs Viggle’s meager 3.5 million registered users). But since Wetpaint is primarily a service that attracts people to news articles about entertainment properties via Facebook, Viggle has a chance to proposition those readers into trying and using its own service.

Viggle’s purchase comes after its failed attempt to acquire rival TV check-in service GetGlue last year when it was unable to obtain the financing to push the deal through. And just like that deal, the Wetpaint acquisition shows that Viggle is pretty confident that its service can be valuable if it can get it in front of more people. This is certainly its $30 million chance to do just that.

The two services will continue to operate separately, but will begin teaming up when it comes to perks and promotional materials, Viggle said in a statement.

The news comes as plenty of social TV startups have started to consolidate, with the most recent being GetGlue’s acquisition by i.TV. Twitter is also positioning itself as an essential platform for TV networks that have large advertising budgets.