Free apps have been around ever since Apple launched the first mobile app store that mattered back in 2008. But there were plenty of paid apps too, including a $.99 farting app that pulled in $30,000 in a single day. In 2013, however, freemium clearly became pretty much the only model that matters.

And it’s the model that drove the most success for the top-grossing apps of the year, Candy Crush Saga and Clash of Clans.

The best-selling paid app for 2013, according to Apple, is Minecraft: Pocket Edition.

That’s up from 77 percent on iOS just in June of this year, and up from 89 percent on Google Play. Free of course, to download, and free to use or play — to an extent. Games, social apps, news, entertainment, and books are almost exclusively freemium with in-app purchases.

“For games especially, freemium has become a successful business model,” Distimo’s Christel Schoger told me from Amsterdam. “If the user is interested after the first look at the free game, I can imagine that he will often be likely to ‘invest’ more in the game.”

“In-app uptake [is] actually stronger on Google Play,” she added. “This is related to the top revenue countries on Google Play: Japan and South Korea … which also culture-wise tend to be in favor of the freemium model.”

The only categories that are not are education, productivity, and navigation. 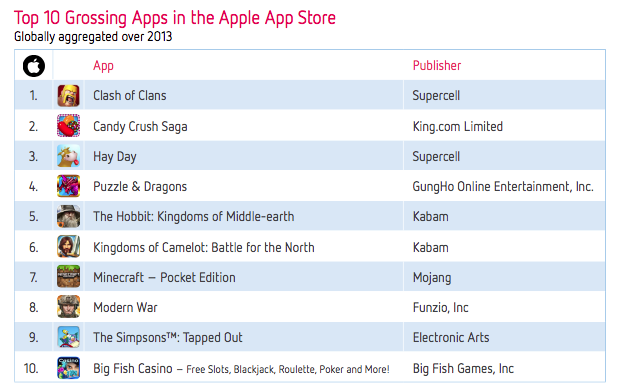 Apple still leads, but that lead continues to shrink.

The top-grossing apps in both app stores continue to be games, with all of the top 10 grossing apps on iOS in the games category, led by Supercell’s Clash of Clans and King.com’s Candy Crush Saga. On Google Play, the top grossing apps were Candy Crush Saga and GungHo Entertainment’s Puzzle & Dragons — but messaging app Line reached third.

Interestingly, various incarnations of Line were third, fifth, seventh, and 10th on the Google Play top-grossing app list. They’re all messaging apps, to a degree, with social gaming built in.

The top-grossing app of all, however?

Candy Crush Saga, which was No. 1 on iOS, and No. 2 on Google Play, is almost certainly the top earner of 2013. Distimo, of course, doesn’t see actual revenue numbers — its data is interpolated from the analytics it captures for thousands of apps.

And the company is a little coy about reporting cross-platform numbers.

“Without giving too much away … if you look at Candy Crush Saga revenue from iOS and Google Play combined, it has a good chance to gain a high position on a ‘top cross store app’ chart,” Schoger told me, not quite winking. “This would definitely be a candidate for a ‘cross store success.'”

Clash of Clans for Google Play was just released in early November, however, Schoger added, meaning that Candy Crush will have a fight on its hands to maintain top position in 2014.