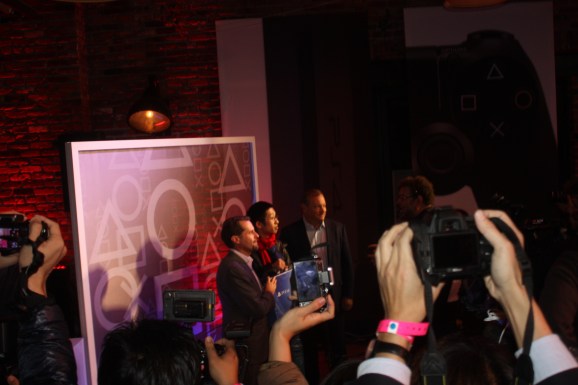 Joey Chiu stands on stage with Andrew House and Jack Tretton to get the first PS4 ever sold.

As Christmas approaches, both Sony and Microsoft have positioned their next-gen consoles as must-have presents for the biggest gift-giving day of the year. In the battle for the hearts of consumers, however, Sony’s PlayStation 4 might have an early edge.

Demand and interest for PlayStation 4 is more than three times greater than that of the Xbox One, according to online-shopping portal BuyVia. The website helps consumers find stores and online retailers that have certain items in stock, and the company found that more of its users are currently using its site to look for the next-gen Sony console than Microsoft’s Xbox offering.

More than 150,00 consumers used BuyVia to look for a PlayStation 4 between Nov. 25 and Dec. 14. In that same period, only 45,000 people used the site to look for an Xbox One. That’s a ratio of 3.3 to 1. Out of the all the consumers that clicked through Buyvia’s site and purchased a next-gen console, 43 percent bought the Xbox One, and 57 percent picked up the PlayStation 4.

“This may be due to the lack of availability of the PS4, as Xboxes were more generally more available for purchase,” BuyVia cofounder Norman Fong said in a statement. Fong thinks that when people found the PS4, they felt more compelled to make the purchase since stock seems more limited.

Those stock limits are also reflected in stores. Over the last seven days, BuyVia has seen the Xbox One available for immediate purchase at least once a day. The PlayStation 4, on the other hand, was only in stock once in the past seven days.

Consumer demand and interest doesn’t necessarily mean that the PS4 is outselling the Xbox One. Other factors could be causing more people to turn to online tools like BuyVia for help in a quest to pick up the PS4. If Microsoft has more Xbox Ones in stores, people might just head into their local Best Buy without having to scour the Internet.

In November, when both consoles first hit store shelves, the PlayStation 4 outsold the Xbox One. PS4 launched on Nov. 15, which gave it a seven-day head start on the Nov. 22nd launch of Microsoft’s device. In a statement regarding November’s sales, Microsoft noted that the Xbox One sold more consoles per day than the PlayStation 4.

Despite the competition, both Sony and Microsoft revealed that their latest home-gaming systems were the best-selling consoles in the respective histories of either brand.