EA Sports has touted its Ignite video game engine as a multisport superstar — a versatile base for the next generation of FIFA, Madden, and even the back-from-retirement NBA Live. Now, all of these blockbuster franchises share the same foundation, one that promises better A.I., redefined physics, and slicker presentations on Xbox One and PlayStation 4.

While EA sees Ignite as an all-everything world beater, it’s more like an athlete who’s too cocky to know the limits of his or her abilities. In fact, Ignite is the Michael Jordan of game engines. I’m talking about the MJ who failed to dominate in competitive ventures beyond basketball. Yeah, Ignite is like that guy.

Let’s talk about the Xbox One versions of FIFA 14, Madden 25, and NBA Live 14 — which are all available now — and you’ll see what I mean.

The latest incarnation of the soccer juggernaut is pretty great on Xbox 360 and PlayStation 3, and the next-gen version remains solid. At first glance, the Xbox One experience looks similar to its 360 cousin. The player models are slightly more polished, and the framerate is still good. I noticed some new camera angles during the pregame ceremonies and during replays. The crowd is more detailed as well.

I expected more from the visuals, however. Playing this on new hardware made me a harsher critic. The graphics didn’t convince me that this was running on a state-of-the-art engine. 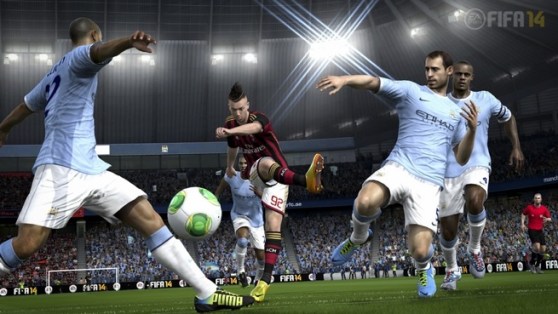 Surprisingly, the gameplay made the biggest case for Ignite. Next-gen FIFA 14 feels better. The ball rolls with more freedom, which makes the passing game more satisfying. Defending is less tedious, too. Overall, I could sense how the refined physics and player behavior added to the action on the field.

FIFA 14 didn’t try to bribe me with GPU candy. Instead, it charmed me with fun. But still, I don’t see why these tweaks couldn’t have happened on older hardware. And I wasn’t happy to see the developers leave out tournament mode, either.

How it’s like Jordan: FIFA 14 is the curtain-call basketball Jordan. You know, the one who could still hang with the youngbloods and throw down 43 points in a game — when he was 40 — with the Washington Wizards. Ignite plays a good game of soccer, but it’s not next-gen good.

Next-gen Madden 25 just doesn’t give me enough reason to recommend making the upgrade. It’s a visually disappointing effort, boasting few improvements. While some players look like their real-life counterparts — Denver Broncos quarterback Peyton Manning comes to mind — others could use some work. For example, San Francisco 49ers standout QB Colin Kaepernick stands bare armed without a single piece of ink on his biceps. Many of the coaches also look goofy. I did a double take when I saw Tennessee’s Mike Munchak.

Animations could be better as well. Stud running backs gallop with an unnatural jerkiness that is inconsistent with Ignite’s true-player-motion claims. On the positive side, stadiums — complete with livelier spectators — look better, at least. And so does the grass on the field. I appreciate those touches. 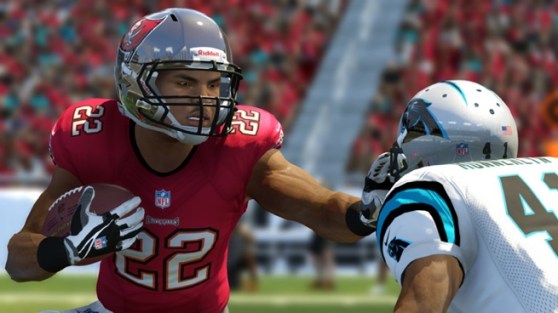 Above: The Xbox One version of Madden 25 looks only slightly better than the Xbox 360 version.

When it comes to gameplay, I really didn’t notice anything that pushes Madden to a new level. Running the football is a lot easier now, and I’m not sure if that’s the result of a slightly wonky blocking system. On certain occasions, I broke a big play for a touchdown because the opposing team’s A.I. defenders collided into each other in an almost slapstick style while running toward me. That’s not good.

Madden is still a serviceable football game, but it’s not a compelling showcase of Ignite’s fancy new tricks.

How it’s like Jordan: Madden 25 is the minor-league baseball Jordan. Sure, he got a few runs batted in against actual pros, but he could barely hit above .200. That’s pretty unremarkable — just like this version of the pigskin sim.

Oh, NBA Live … I remember when it was an enjoyable alternative to the NBA 2K series. I even look back fondly at the silly creativity it once had. Dunk button? What an awesome, loony experiment that was.

NBA Live 14 doesn’t make me think of those old releases. It actually reminds me of EA’s failed NBA Elite reboot, which was so buggy that it never saw the real world.

Live’s return to the hardwood is a mess. I don’t have another edition to compare it to, but when I hold it up to its gorgeous competitor, NBA 2K14, the mismatch is disappointingly obvious. Live might be on Xbox One, but it looks like a middling 360 game. Characters have a plasticky patina and stiff animations that would make eternal draft bust Shawn Bradley proud. 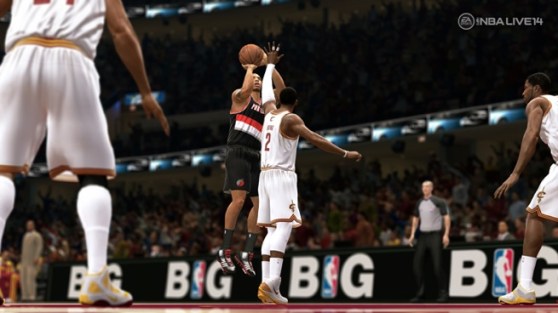 Above: NBA Live 14 is an unsuccessful comeback for the franchise.

While 2K14 presents a flowing game of basketball, Live is herky here and jerky there. Passing is a hassle. The ball travels in lazy, unrealistic arcs. Shooting is equally awkward, requiring players to time their jumpers according to an arbitrary flashing-light mechanic. The developers didn’t even provide a proper tutorial for how to navigate the new gameplay systems, promising to include one in a future patch.

I commend EA Sports for finally getting back into basketball, but this release clanked off the iron harder than a free throw from Houston Rockets big man Dwight Howard.

How it’s like Jordan: NBA Live 14 is golf Jordan in all his amateur glory. No matter how much money he threw at his skills, he was never more than a millionaire masquerading as a wannabe PGA pro. Hopefully, EA’s roundball release won’t follow a similar fate.

Michael Jordan was an amazing basketball player. Unfortunately, His Airness couldn’t maintain that level of skill across other athletic endeavors. EA Sports Ignite has followed a similar path. Its first batch of titles is wildly inconsistent, going from good to gross. Luckily, the game engine is still a bumbling, stumbling rookie. Developers will probably learn how to maximize its potential over time.

That gives me reason to keep a sports-fan level of optimism. Who knows, maybe next year Ignite will be a true contender.