Not even Google is immune to the pull of making end-of-year lists.

The company today released its year-end zeitgeist, and the top trending search times are both unsurprising, and, frankly, a bit depressing.

The top trending search, was of course, for Nelson Mandela, who died this month at 95. Action film star Paul Walker, who died last month in a car crash, was the second most-searched term, and Glee star Cory Monteith, who, yes, also died, was the fourth most-trending term.

Bookended by all that death was the iPhone 5S, which was the third most-trending story of the year. 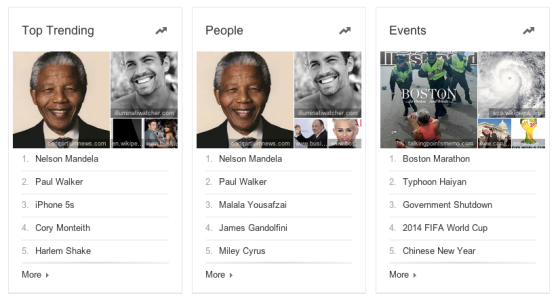 Above: Not much good news this time around.

The story was roughly the same on the events side, which was dominated by searches related to the Boston Marathon and Typhoon Haiyan (which killed over six thousand people). The US government shutdown was the third most-trending event, and the 2014 FIFA World Cup was fourth.

One person who wasn’t such a big deal for Google searchers was Edward Snowden, the man who ushered in the post-innocence age of the Internet. Snowden doesn’t appear anywhere on Google’s top-10 charts.

In all, Google lists show pretty clearly what we already know: When something bad happens and people need more info, Google is the first they tend to go.