Google’s Niantic Labs has formally launched its location-based game Ingress after a huge worldwide event series wrapped up over the weekend.

Ingress has been operational for more than a year and has more than a million downloads. But now it has formally exited beta testing and is available for download on Android mobile devices worldwide. 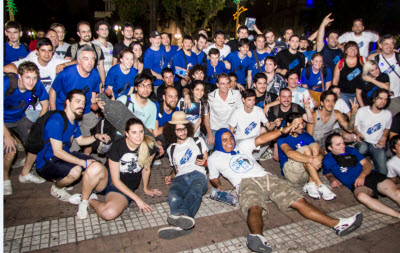 Niantic Labs, a skunkworks division in San Francisco and Mountain View, Calif., created a game that pits two factions against each other, the Enlightened and the Resistance.

The team finished a 39-city, nine-week event series dubbed Operation #13MAGNUS on Saturday. The game had two events running simultaneously in San Francisco and Buenos Aires, with thousands of gamers turning out over the course of the day.

Hundreds of thousands of people followed the event’s progress online and participated in their local cities.

At the beginning of #13MAGNUS, Roland Jarvis, the self-declared ruler of the Enlightened Faction, was shattered into 13 pieces, or “Shards,” and scattered throughout the world. The challenge laid out for Agents was to reunite these Shards in San Francisco in order to resurrect Jarvis or to move them to Buenos Aires in order to destroy him forever. The Shards had to be moved across the globe by forming links between Portals, in-game locations that you can find in real-world locations.

Agents in more than 200 countries participated to claim the Shards and move them. The Enlightened faction won, resurrecting the game character Roland Jarvis, who appeared in downtown San Francisco, emerging from the Cupid’s Span Portal. Niantic will give participants a “founders medal” for getting involved in the event.

John Hanke, vice president in charge of Niantic Labs, told us in an earlier interview with GamesBeat, “Gaming and real-life meetups are really coming together. I can’t say we predicted how popular the live meetups would be.” He added, “We didn’t anticipate the degree to which people would go to live events to meet people they didn’t already know. The game is a social icebreaker.” 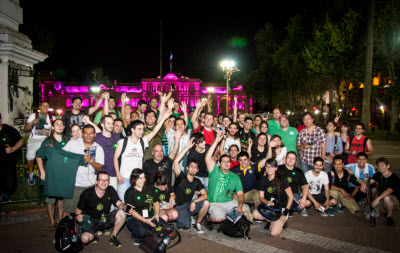 Above: The Ingress faction in Google Niantic’s Ingress game

The two sides battle with each other via smartphone screens as well as desktop computers. On the desktop, you can see a bird’s-eye view of the battle and communicate with the players in the streets. You’re like an operator in the control center, dispatching commands.

If you get near a Portal, you can hack it in order to take it over for your side and benefit from the energy concentrated around it. That energy has an influence on human minds and is a spark for creativity.

The name Niantic refers to a whaling ship that docked in San Francisco Bay and became a hotel. It is now nothing but a historical landmark at the site of the iconic Transamerica Pyramid. The name Ingress refers to the entrance into our dimension.

The title is free to play, and Niantic is experimenting with a sponsorship model.