Ecommerce is so yesterday. Shopify’s legendarily simple online platform took in more cash for its 80,000 merchants than Zappos, WalMart, Target, and Best Buy on Cyber Monday 2013, but that’s just a small piece of what the company is doing.

The bigger picture is, it’s reinventing retail — and retail systems — one seller at a time. 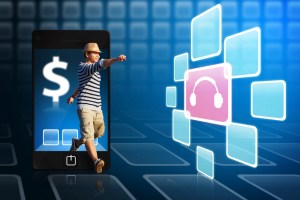 “There are glimpses of things in the market today that provide a foreshadowing of the future of retail,” Shopify’s chief platform officer Harley Finkelstein told me today. “But no one ties it all together.”

That’s why Square is just “OK” in Finkelstein’s view, and eBay has only part of the solution, and PayPal’s products for retailers miss the mark, as do pretty much all the other contenders. They’re all pieces of the puzzle, but the problem is that merchants have to fit them together.

Finkelstein’s plan is to ensure they don’t have to.

The cash behind Shopify

Part of the investment into Ottawa-based Shopify, and therefore part of the story behind Shopify, comes from government sources.

The Ontario government put $90 million into the Ontario Venture Capital Fund in 2008, which didn’t invest directly in companies but  invested in Canadian VCs: Georgian Partners, OMERS Ventures, and more. Those VCs then, of course, invested in Shopify and other startups.

That seed investment seems pretty smart in retrospect: Through that $90 million, John Marshall of the Ontario Capital Growth Foundation told me, the government leveraged $820 million in private equity.

“Merchants need to be able to sell anything, anywhere, anytime,” he says, referring to online sales, offline revenue, mobile sales, social commerce, and any other means of exchanging products and cash. “We want to building one thing that works for everything: one central merchant dashboard, one set of inventory, one set of financial data … no matter what channel you use it all goes back to your dashboard.”

Shopify has already made significant steps in that direction.

The company has released a point-of-sale solution and a mobile commerce product over the last year. But there’s a long way to go — which is why its recent massive $100 million series C funding round is important.

“Shopify has done an amazing job of scaling,” Justin Lafayette, one of Shopify’s investors, says. “They’re entering a new phase of leadership.”

In fact, Lafayette says, the company has been so “capital efficient” and profitable that it has “consumed very little if any” of its previous rounds of financing. He should know — he’s a principal at Georgian Partners, which participated in both Shopify’s B and recent C rounds.

Which makes you wonder what the company needs $100 million for — a question that Finkelstein was coy in answering.

“Over the past two years we’ve made two acquisitions,” he says. “Our M&A strategy is opportunistic … there could be some acquisitions in the future.”

It doesn’t seem likely, however.

Shopify’s two previous acquisitions were both acqui-hires that brought smart agency people into the business for their mobile and marketing expertise. Any future acquisition would have to be easily integrated into Shopify’s emerging commerce platform, given the company’s holistic mindset.

It’s more likely that the company will continue building out its solution itself. But competitors are looming.

As Shopify emerges from the “ecommerce platform” label and becomes an all-commerce company, its competitors expand from StorEnvy and BigCommerce and Magento to existing POS companies and inventory management companies and other backend providers. Not to mention hot startups like Square, and new/old competitors like PayPal, or nightmare competitors like Google, if it ever gets Google Wallet and Google Payments out of hobby mode.

But Finkelstein has a plan for that.

And the company’s integrated vision is another differentiator, he says.

“There’s a lot of companies doing one thing,” he says. “But no one ties it all together: payments, inventory, records, channels … in one central merchant dashboard.”

It’s an ambitious vision, and one that relies on the future of retail not just being integrated, but also staying — at least partially — bricks and mortar.