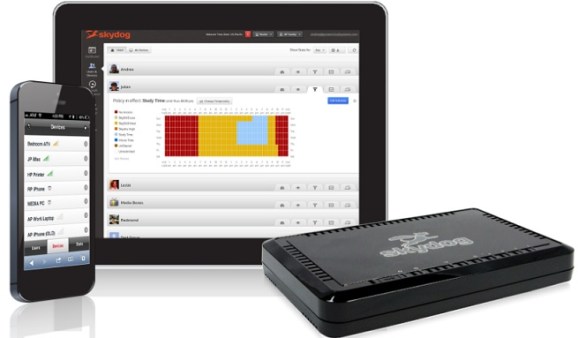 PowerCloud Systems has teamed up with Common Sense Media to promote the parental control system built into PowerCloud’s Skydog smart Wi-Fi router, which can monitor Internet usage by the whole family.

Skydog combines a router and a web app that you can use to control what sites your children visit on the Internet. It enforces parental controls and also sends you alerts when something out of the ordinary happens with your Internet usage or when your service suffers an outage.

Under today’s deal, Common Sense Media, a nonprofit aimed at protecting kids as they use technology, will provide its content ratings with PowerCloud’s product so that parents have a way to evaluate what their kids should or should not see.

Palo Alto, Calif.-based PowerCloud Systems has created a router that lets you set up a bunch of policies so you can monitor which sites certain users can visit and what times of the day they can use the Internet. It also keeps logs of Internet activity so you can review it, and it sends alerts to your smartphone if there’s a violation of the policies. You can limit the time your kids spend on gaming and social networking sites, particularly on school days. And you can turn off the Internet at bedtime. Skydog can do this because it creates firewall zones that separate users within a home network.

Under the deal, Common Sense and PowerCloud will give parents a tool for introducing age-appropriate content to their children in the home. Skydog users will have easy access to Common Sense Media’s independent, age-based ratings and reviews of online media, based on developmental criteria from some of the nation’s leading authorities.

“Kids today are connected 24/7, and all this media and technology at their fingertips presents fantastic opportunities for life and learning, but with it comes risks. We provide trustworthy information, tools and guidance to keep kids safe online and help families find the good stuff,” said Amy Guggenheim Shenkan, president and COO of Common Sense Media.

A feature of Skydog is that it can provide a watchlist of web sites that a parent can either blacklist, or block, or whitelist, providing unfettered access. The Common Sense Media guidelines will help parents make those decisions. Skydog will have a direct link to the Common Sense Media information. This integration will happen in the next few months.

“Skydog is the only home networking solution that gives parents the tools they need to help their kids make smart choices about their connected lives,” said Jeff Abramowitz, founder and CEO of PowerCloud Systems. “Our partnership with Common Sense Media will augment current content filtering capabilities by directing users to specific media on the Internet that is suited to their children’s needs.”

A parent can use Skydog to spy on their kids. But that’s a conversation that will have to happen in the household. You can also use the router to decide if a Skype call will take priority over a child’s streaming music, or make sure that a streaming movie isn’t interrupted by a high-bandwidth game.

In October, PowerCloud announced it had begun shipping Skydog to early backers who helped drive its Kickstarter crowdfunding campaign to success. Skydog is available on the company’s web site and at Amazon.com.

The American Academy of Pediatrics says that children and teens should “engage with entertainment media for no more than one or two hours per day.” A study by McAfee found that parents feel increasingly out of control when it comes to their kids’ Internet usage. On average, kids spend an average of six hours online per day, and parents aren’t happy about that. Four out of five parents say they do not know how to find out what their kids are doing online, McAfee said.

Skydog 1.1 sells for $150. PowerCloud plans to offer a range extender for Skydog in the future.

PowerCloud Systems is a startup that spun out of Xerox’s famous Palo Alto Research Center (PARC), the research think tank that invented the personal computer.

The company’s backers include PARC, Qualcomm Ventures, Javelin Venture Partners, and Walden Venture Capital. PowerCloud Systems was founded in 2008, and it has already been shipping its CloudCommand platform for deploying and monitoring Wi-Fi networks and services for businesses such as hotels, retailers, and healthcare providers.

PowerCloud Systems has raised $8.5 million, not counting the $121,812 it raised on Kickstarter.