Reaching beyond Google Glass, Atheer Labs is announcing a crowdfunding campaign on Indiegogo today to bring 3D wearable computing to the masses. 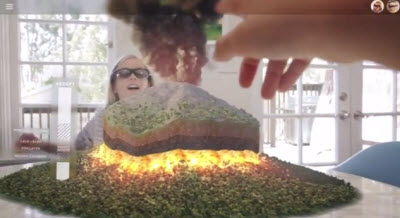 Above: Atheer shows a virtual volcano that you can see with its augmented reality 3D glasses.

While Google Glass can display two-dimensional images, Silicon Valley’s Atheer Labs has added the third dimension and hand-based gesture controls that shows you the real world with a virtual layer.

Atheer’s augmented-reality glasses were revealed by founders Allen Yang and Soulaiman Itani in a demo earlier this year. In a form of augmented reality, the glasses can add an extra dimension with a 3D display that can help you layer a virtual world on top of the real one.

In the videos below, Atheer shows how you can wear the glasses to pick out your meal for the day from a cabinet or view 3D animations on your kitchen table. You can control your view with hand or finger gestures. And you can even type while viewing a virtual computer display that is visible only to you.

Atheer is now taking preorders for its wearable augmented-reality computer. And it’s making its developer tools available via the Indiegogo campaign.

Atheer said its device will weight about 75 grams and use natural touch interaction. It will create the Atheer Developer Kit (ADK) for developers and the Atheer One for early adopters. The company says the system will be able to show you the equivalent of Xbox-quality images on your glasses display with an ARM processor and a mobile phone battery, said Itani in an interview with VentureBeat.

“We have two targets, one for developers who want an early chance to work on our platform,” Itani said. “The other is for consumers who will be the early adopters. We have had a huge number of people who want to get their hands on it. We are taking it from a technology to a product.”

The ADK can act like a tablet or a laptop and it has a high-definition 2*XGA display and 36-degree field of view. That’s like putting a 15-inch tablet in front of your face at half an arm’s length. It will operate quickly with under 5 milliseconds of latency, or interaction delay. It will sell for $850 and will enable developers to make applications on the Atheer platform. 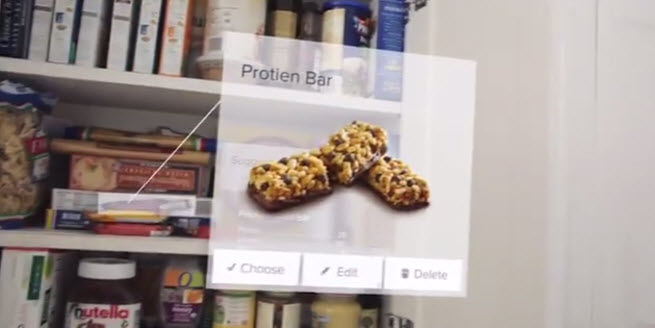 Above: Searching for a protein bar with Atheer’s glasses.

Meanwhile, the Atheer One tethers to Android phones and has a 65-degree viewing angle. Looking at the glasses screen is like viewing a 26-inch tablet at half an arm’s length, with 2*XGA resolution. It will weigh about 70 grams on your head and will sell for $350 for Indiegogo donors.

Above: Atheer Labs’ vision video shows how its glasses will let you play a virtual Battleship game on a real-world table.

The idea is to let people interact, manipulate and control the data and devices around them so that they can play harder, work smarter and learn more. Atheer refers to the technology as “immersive computing,” which extends and enhances your sight and touch to create a seamless integraiton between virtual and physical worlds.

“There are a lot of considerations to make with a wearable system, for example people cannot wear glasses that are more than 100 grams for longer than 20 minutes. We were able to get all of the functionality and immersive experience in 75 grams, and we’re now putting it in the hands of the developers,” said Itani, the CEO of Atheer Labs. “We will support them as they create the next generation of immersive and engaging applications.”

The Mountain View, Calif.-based company was founded two years ago. Atheer said it has more than 36 patents. Investors include Farzad Naimi of RONA Holdings and Bobby Yazdani of Saba Software.

“Atheer Labs is a small company doing great things. There is so much excitement around our technology coming to the market place, that we wanted to give the entire technology community a chance to have early access to the product and a way to create some seriously killer apps,” said Itani.