The adorable, hungry green monster Om Nom has gotten around. He’s stuffed himself full of candy in four different Cut the Rope games and has traveled through time from the Stone Age to Ancient Egypt and beyond. He’s seen (and eaten) it all.

Today, developer ZeptoLab launched Cut the Rope 2: Om Nom’s Unexpected Adventure, available exclusively for iOS, with an Android version due next year. But aside from introducing some fresh new faces, it doesn’t feel like much of a sequel — at least, not enough of one to warrant the special number in the title.

The Cut the Rope puzzle games are popular for a reason. First — well, Om Nom is cute. But ZeptoLab excels at finding and maintaining a balance of depth and accessibility.

Like in past installments, collecting all three stars in a level is tough. Some puzzles are easier than others, but depending on your skills, you may spend ten or twenty minutes working out the perfect solution to catch every star and feed Om Nom every piece of candy. Other players will be content just coasting by with one or two stars each stage, so they’ll speed through the 120 levels (and five worlds) in a few hours. 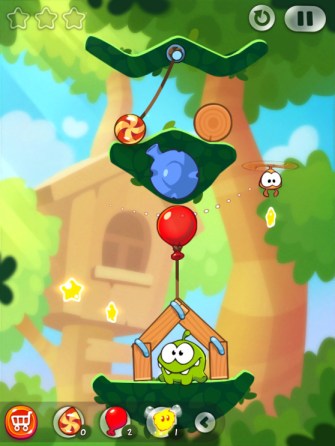 Above: Roto helps lift and transport candies and other objects, like logs.

About 20 of those levels are optional and locked behind a special gate: You can only open them by obtaining the four-leaf clovers scattered here and there. In my playthrough, I managed to get a few, but these are for more expert players — or those who care to make liberal use of the mere handful of power-ups, such as the balloons that can lift Om Nom into the air. (Additional power-ups cost money and come in boxes that cost between $4 and $50.)

The best part of Cut the Rope 2 is undoubtedly the “Nommies,” or creatures that Om Nom befriends as he jumps from the Forest world to Sandy Dam and beyond. One of my favorites is Lick, a puffy-cheeked orange critter that, with a tap from your finger, flicks its tongue out to form a bridge or barrier for candies and other objects.

Then there’s Blue from the Junkyard, a depressed, squished cube that multiplies as many times as you tap him, creating all sorts of towers and constructs to help you solve the puzzles at hand. 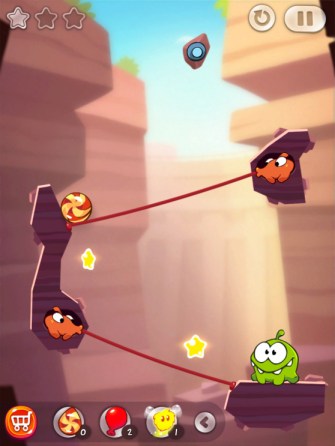 Above: Lick can form ramps for candies to travel on — and catch Om Nom if he falls.

Not all of Om Nom’s helpers are this fun (the helicopter-like Roto is boring and plain), but you’re sure to love at least half of them — especially when they gather together in the same level.

ZeptoLab, as usual, has designed colorful, smart stages. While the background art doesn’t exactly pop out at you, the layout of each puzzle is cleverly orchestrated and will test your ability to strategize and think of ingenious ways to nab every star, candy, and clover (a real juggling act). And nothing’s more fun than seeing Om Nom bob around like a duck in the clear blue water, which helps add a variety of physics to the mix.

Through in-app purchases, you can dress Om Nom up in different hats, change the candies to another treat (like a frosted cookie), and even alter the pattern your finger makes when you swipe around the screen. ZeptoLab has thrown in the winter set for free; the others currently cost between $2 and $5.

Here’s a guarantee: If you liked any of the older Cut the Rope titles, you’ll enjoy this one. You can pretty much guess what you’re getting. 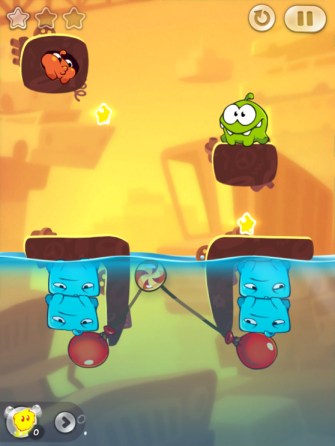 Above: Blues multiply to form towers and makeshift bridges, even when upsidedown.

As fun as it is to squeeze whoopee cushions to blow air, pop balloons, activate candy-attracting magnets, and strategically cut ropes so that the item latched to them swings and activates buttons, Cut the Rope 2’s puzzles don’t feel much different than any other ones I’ve played before. So if you’re tired of the formula, you probably won’t be bowled over by this latest release. ZeptoLab didn’t do enough to makes its official sequel stand out.

Cut the Rope 2 is supposed to show how Om Nom finds his way home again and explain what happens to the giant balloon of candy that the mischievous black bugs stole, but the only story cutscenes that I watched were the opening short and one video that did little to sate my appetite. Other videos will be available in the game at later dates (one per world), but if you’re looking for more context or an introduction to the new characters, you may not get it — at least not right away.

I noticed minor lag during my playthrough on my iPad Mini. It was noticeable and fairly frequent but not detrimental to my progress.

While the newest Cut the Rope is one of the most creative and entertaining games you’ll download on the App Store this month, you may already be bored with Om Nom and the trouble you go through to give him sweets. As much as you may still want to pinch his chubby cheeks, that cuteness won’t excuse the routine or make this “unexpected adventure” any less predictable.

Cut the Rope 2: Om Nom’s Unexpected Adventure was released for iPhone, iPod Touch, and iPad on December 19, 2013. The publisher provided GamesBeat with a code for an iOS download of the game for the purpose of this review.