Censorship seems to be one of Google’s biggest concerns. The company released its transparency report today after fielding thousands of takedown requests from governments around the world.

And based on the report, the trend is only getting worse.

Since 2010, Google has released eight transparency reports detailing government requests to take down this content. These requests come through law enforcement, individual politicians, court orders, and more. The company explained in a blog post that it is effectively being bullied by some of these entities to remove information. 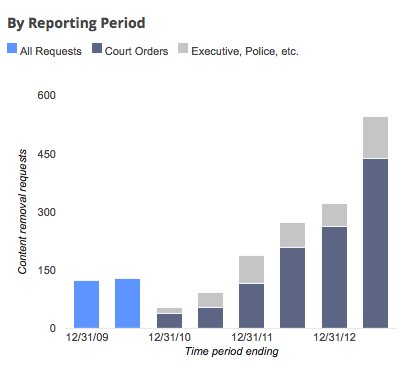 Google says the number of requests has increased by 68 percent since the second half of 2012, which is a considerable amount. In total, Google received 3,846 takedown requests that affected 24,737 piece of content.

The U.S. contributed 545 requests to this total, which is a 70 percent increase over its total in the last reporting period. Defamation remains the biggest reason for takedown requests coming out of the U.S.

Google was followed by Twitter in publishing these requests. But after former NSA contractor Edward Snowden leaked surveillance information, including a data collection program involving a number of top tech companies, many of those companies jumped on the transparency-report train.

Keep in mind, of course, these are only numbers regarding takedown requests to have content removed from Google’s services. This is not representative of the much touchier issue of national security data requests, where governments ask companies like Google to supply information on its users.

Google, Facebook, Microsoft, Dropbox and others continue to lobby the U.S. government to permit them to publish exactly how many data requests they receive and how many users the data requests affect.

The government has not been clear, nor has it evenly distributed permissions on what companies can and cannot publish. As it stands, only some companies can publish bits and pieces of information about national security data requests, and it differs per company.

In August, the U.S. announced that it will release its own report reacting to the many calls for transparency from the country’s intelligence agencies.

That doesn’t mean Google and the likes are ready to back down. A group of seven major technology companies recently came together to create the Reform Government Surveillance coalition to get more of a say in how spy-tactics in the U.S. work.