Our story on IBM’s predictions for five big innovations that will change our lives in the next five years has turned out to be very popular. So we decided to give readers more of it with this transcript of our interview with the fascinating Bernie Meyerson, the vice president of innovation at IBM. We had a chance to go over each of the five predictions in our talk.

Meyerson said that IBM (whose founder Thomas J. Watson famously predicted that there was a worldwide market for five computers) takes its predictions very seriously, tapping the grassroots recommendations of its 220,000 technical employees and the top-down views of its leadership. Meyerson runs a group dubbed the IBM Academy of 1,000 IBM scientists and also runs liaisons with universities. He is also a pioneer of a chip manufacturing process known as silicon germanium, which combines two different elements to make a very fast communications chip.

So Meyerson knows his tech. He’s also got a good sense of humor. So please check out our interview.

VentureBeat: Tell us about your predictions.

Bernie Meyerson: Setting the right perspective on these things, what we do here in the 5 in 5, we try to get a sense where the world is going with some decent probability. That then focuses where we put our efforts. These are seminal shifts. They’ll drive large chunks of society in a given direction. We want to be at the leading edge with them. Preferably enabling them. That’s what’s behind this. Unless you stick your neck out and say, “This is where the world is going,” it’s hard to then argue you’ll be able to turn around and get there first. 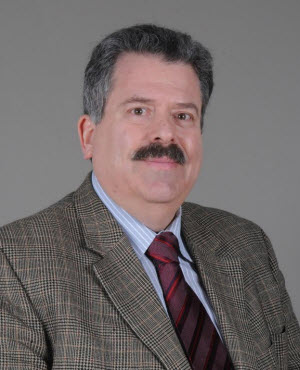 Above: Bernie Meyerson, vice president of innovation at IBM.

VentureBeat: Have you done this a lot of years in a row, then?

Meyerson: Yes, many years. We’ve been doing this quite a long time, approaching a decade now.

VB: Myself, I would think it would be easier to do 20 in 5. Just spread those predictions out. Some of them will be more likely right.

Meyerson: You’d be surprised. One of the joys of having something on the order of 220,000 technical people, you’d be astonished by the diversity of stuff we hear about. It’s many times not so hard to identify the ones that’ll happen. The harder part sometimes is nailing down what you want to focus on, as opposed to what’s going to work.

You may have seen, we all agree there’s going to be almost a globalization of access to big data and access to analytics that will drive it. Once you have that, what are the impacts? You may start with a single assumption, and from that assumption say, “Well, the consequences are X, Y, and Z.” The societal consequences of that will be enormous.

To some extent, that’s what’s here. What underlies most of these is the fact that we have this enormous investment in data analytics and the handling of big data. What we’re seeing happen is astonishing. The ability, in the past, to understand and get insights from data was a big deal. People talked about data mining and all the stuff you could get out of that. That had virtue, but if you go to the next level, it gets interesting. Then you can start talking about stuff that sounds like science fiction – the ability to not only predict the future, which is what modeling is about, but to change it.

The real-time ability to change the future in an active fashion sounds like science fiction, but now we do it every day. That’s where you start to get into things like—We use the example of the city we help you live in. Think about traffic reporters. They say, “Hi, you’re stuck on the Long Island Expressway.” That’s not an epiphany. You could announce that on any morning at 3AM and be accurate. What would be interesting is making an announcement that says, “Hey, you would have been stuck in a traffic jam now, but I predicted it would happen 20 minutes ago, so I changed the sequence of some lights that feed this road, and so there’s no traffic jam. Have a nice trip.”

That changes the way you live in a city, but it requires you to collect vast amounts of data, build accurate models, and understand the reaction of what you’re worried about to changes. It’s a hugely complex issue. You can’t just do it by licking your finger and sticking it in the air. And that’s one of many examples.

VB: The process for doing this, did you guys discuss them for quite a while?

Meyerson: We do it bottom-up and top-down. The team will go about this for many months on end and we’ll go through and refine it. A lot of people put in their ideas. What you’ll find sometimes is that you see a common theme, and then you look at that theme and realize that it has a massive impact. It’ll be so pervasive that you follow that up and say, “Where does this lead us as far as the areas we care about?”

There’s this great quote from Ann Winblad at Hummer-Winblad — “Data is the new oil. Unrefined, it is of no value. When you refine it, it powers the world.” If you take that at face value, it’s a good explanation of what we’ve been doing for the last 10 years. We didn’t spend $25 billion, between internal and external work, on analytics without good reason. If you believe data powers the world, you have to understand and extract insights from it and act upon them. But where do you do it? All these are examples of where you do it.

If you look in the classroom, a typical student starts every year cold. Most teachers have never seen the kid before. You have a cold start and no background or relationship every time you begin the school year. What would happen if it was all captured and you had an electronic persona that followed you through your educational cycle? People know your strengths, your weaknesses, where they should apply more help to get you through areas they know you’ll need help. At the same time, places that you excel, they could challenge you with better materials.

Think of the ability for a classroom to operate so that every individual child has instantaneous attention from a system that recognizes immediately that they’re struggling with a concept, and feeds that back to the teacher – “This person needs help in this regime.” Even better, when you have people who come up with new schemes for educating in a particular area, you can get feedback on how it works in a matter of instants.