Pretty soon, blockbuster console games could pop up on your mobile device.

Republique (launching today for iOS and other platforms later) is proof. Developer Camouflaj aspired to create a triple-A experience on mobile when it launched its Kickstarter crowdfunding campaign last year, and it’s succeeded. Big-budget graphics and an ambitious story carve out Republique’s three-hour first episode (part one of five), “Exordium,” but it seems touch controls may be too big of a barrier to making stealth-action innovative on the small screen.

Republique doesn’t break its promise: Its quality and presentation are on par with console games. I got a Remember Me vibe from the main character, Hope, and the futuristic facility she’s trying to escape from. (The Metal Gear Solid series is also an obvious influence, especially when you receive voice-to-text calls, which are paired with amusing, anime-like facial expressions formed through keyboard symbols.)

Republique has few loading screens — doors slide open on command, and as Hope’s anonymous ally, the player can monitor her situation by hacking and jumping between security camera feeds, covering a large area almost seamlessly. The only real sign that material is loading is a brief pause between areas or when you switch cameras, but even that is stylish: The screen distorts like static on a camera feed or explodes into tiny digital fragments and then reforms. 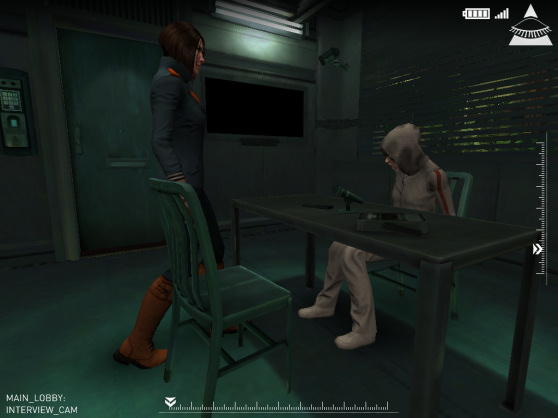 Above: Hope (right, voiced by Rena Strober) and the Mentor (Jennifer Hale), who’s in charge of the facility.

Camouflaj also put a lot of work into getting the voice-acting right. Rena Strober is compelling and empathetic as Hope, and Jennifer Hale (you may know her as Mass Effect’s female Commander Shepard) gives an equally memorable performance. As the Mentor, she’s cruel and merciless, but you also get the sense that she’s also protecting Hope. She makes for a complex villain, and the dynamic between the characters (and you) helps deepen your investment in what happens. I also enjoyed the snarky commentary from a female journalist, whose voice you hear playing over recordings whenever you pick up a propaganda newspaper.

With the way Republique opens, you’ll have a lot of questions: What is The Arrival? What’s with everybody saying, “Watch Your Step”? Who’s really helping Hope, and how did the world get this way?

Republique doesn’t hand you many answers. Instead, players piece them together by uncovering evidence, which is altogether more rewarding. Through the OMNI view mode, which pauses the action and dialogue onscreen and casts everything in a blue sheen (almost like an X-ray image or a “solarized” photo), you can survey Hope’s surroundings (just swipe and hold to look around) and plan her next move without feeling rushed. It also enables you to look at propaganda posters on the walls and analyze evidence: maybe a fingerprint, a newspaper on a table, or even banned books and manifestos, all of which reveal interesting new clues or anecdotes.

Gathering this information is crucial: It serves as currency at special vending machine-like Data Brokers, which sell new OMNI abilities such as eavesdropping (to hack phone messages), scanning email, and distracting enemies. These are valuable and clever ways to spice up the moment-to-moment gameplay, and the more I learned, the more engrossed I became in the dystopian story. 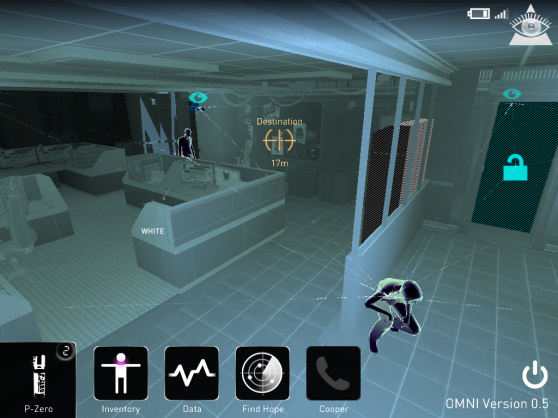 Above: OMNI view enables you to access cameras, scan information, and open menus such as your inventory.

Although Big Brother is always watching, players should feel anything but helpless. Your own surveillance over the facility and the dirt you dig up on the people there gives you a sense of power: You’re fighting back — and hard.

But it helps, too, that teaming up with Hope just feels right. She never let me down as an A.I. partner. She moves where you tell her and automatically takes cover, and sometimes she won’t move forward if an enemy is right nearby. Hope also freely comments on the situation at hand and will grab anything lying around if she’s close to it. This makes her feel like an intelligent character, not a two-dimensional, mindless robot that you’re issuing commands.

Future episodes means more opportunities to improve, but episode one does little to gain your confidence that the gameplay won’t be a drag on Republique’s potential. While the camera and hacking systems are more sophisticated, the stealth portions are lackluster and repetitive.

Good stealth sequences require more than memorizing the patrol patterns of guards, but “Exordium” doesn’t experiment beyond that. And these guards are stupid. Most of the time, only one or two of them patrol a given area, and their behavior is predictable and unexciting. If they catch you (and you’re not armed with one-shot pepper spray or a Taser, which you use to escape their grasp), it’s worse. They’ll walk you back to a holding cell, which is a long and uneventful scene that forces players to sit idle and unengaged. 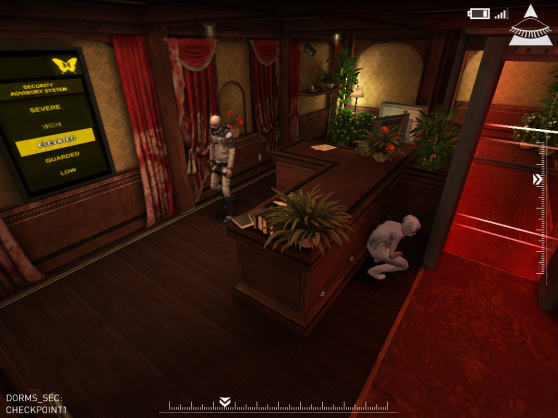 Above: A guard patrols while Hope hides.

I can only cross my fingers that future episodes won’t make this backtracking too punishing — a simple checkpoint-reloading system or instant warp back to a cell would have at least saved players some time (or spared them a headache). However, reaching my ultimate goal (the library) was similarly complicated: Twice I had to return to previously visited areas before I could progress further.

Guards are also indistinguishable from one another even though their identities are different. The developer gave each character a scannable profile card, which shows a real-life picture of a Kickstarter backer and some minor but totally useless details, like medical problems and criminal charges (many of which are reused).

In between the cool, intentional distortion effects that replace traditional loading screens is unmistakable framerate lag. Even on my 1-year-old iPad Mini, Republique had problems running smoothly. I encountered small hiccups fairly often, but I wasn’t put off by them too much (I guess I was just able to pretend they were part of the camera static).

Republique’s first episode is a promising start to a high-quality mobile game series — but more in terms of presentation and story than gameplay, which can get tiring even after a mere three hours. Thankfully, the hacking abilities and a deeper investigation into this bizarre future should help hold players’ interest. Camouflaj better have a lot of new mechanics and twists planned if it hopes players will see this prison escape to its end.

Republique was released for iPhone, iPod Touch, and iPad on December 19, 2013. The publisher provided GamesBeat with a code for an iOS download of the game for the purpose of this review.