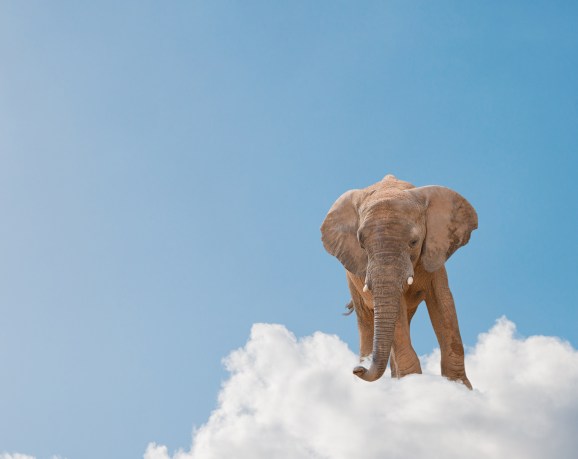 Cloudera is providing commercial support for its take on Hadoop -- whose mascot is an elephant -- on more and more public clouds. This time, it's the top one, Amazon Web Services.

In case you get the urge to store, query, and analyze your data on the biggest public cloud out there, Amazon Web Services, Cloudera has you covered.

As of today, Cloudera, which provides software for implementing and working with the Hadoop big-data storage and processing system, offers commercial support for companies running the enterprise tier of its software on Amazon’s cloud.

The company has announced similar arrangements in recent months in collaboration with public clouds from IBM, CenturyLink, and Verizon, in a quest to help customers run its take on Hadoop on any infrastructure of their choosing. But working with Amazon is a whole other level, because Amazon represents such a major center of gravity in the cloud.

Amazon and Cloudera are working together to release new features and capabilities for Cloudera customers aboard Amazon, and the vendors have drawn up a model to ensure that joint customers receive first-class treatment whenever they need support.

“If a customer running Cloudera on Amazon infrastructure runs into a snag, they call up the Cloudera support hotline, and we validate and verify the entitlement of that customer,” Tim Stevens, vice president of business and corporate development at Cloudera, said in an interview with VentureBeat. “We do the diagnostics. If we determine it’s a hardware issue, not a software issue, then we have a protocol that we’ve worked out with Amazon to be able to transfer that issue to the expert at Amazon who will be able to address that issue, and vice-versa.”

Cloudera’s win amounts to a loss for competitors in the Hadoop distribution business, including Hortonworks and Intel. Those companies have been gaining awareness through their own partnerships with public clouds. Hortonworks, for example, has been bringing its Hadoop distribution to Rackspace, Microsoft’s Windows Azure, and Joyent.

Hadoop distribution vendor MapR has already gotten its software running on Amazon’s cloud (and Google’s, too, by the way). But the pay structure is different. Pricing for MapR depends on how much companies use on Amazon’s cloud, while Cloudera charges subscription fees and provides its premium support 24 hours per day, seven days a week, or eight hours per day, five days a week.

And Cloudera is thought to be a bigger vendor than MapR. At least one can get that idea from a recent report from Wikibon big data analyst Jeff Kelly and his colleagues on big data revenue. The report shows Cloudera’s 2012 revenue coming in at $56 million, more than double the size of MapR’s for the same period ($23 million). So Cloudera’s new way to make money off Hadoop deployments on Amazon could trigger a bigger revenue gain.

Not that every single company wants to copy all of its data and paste it into a Hadoop cluster on a public cloud. Such a day might not ever come, Stevens said. But around a decade from now, Stevens said, “every enterprise out there will have some portion of their information-management architecture interacting, touching, or running in the cloud.”

Still, Cloudera has ideas about which companies to reach out to now.

“There are hundreds and hundreds of implementations of Cloudera open-source core on Amazon,” Stevens said. “We have low dozens of customers and prospects that are in the process of running Cloudera or evaluating Cloudera in production on the AWS cloud, and it’s those folks that we’re now super excited to [tell] you can do this, and you can do it confidently knowing that Cloudera and Amazon will provide you with a first-rate experience.”

Cloudera customers with on-premise and cloud installations might be left wondering how they can manage all of them from one single site or application.

“You can expect to see that kind of capability moving into … the Cloudera offering over time, as the market developer and as customer demand matures,” Stevens said.

For now, Cloudera just wants more people using Hadoop on Amazon’s cloud — and shelling out to get some help.