Bitcoin took us on a wild ride this year — it saw highs and lows, attracting both heady optimism and angry tirades from skeptics.

Most of the action happened in established tech markets in the U.S., Europe, China, and Japan, but the greatest implications could be for the developing world.

Jana is a mobile platform that connects brands with consumers in emerging markets. The company also has a research arm and decided to survey 1,800 people across nine countries — India, Indonesia, Philippines, Vietnam, Kenya, Nigeria, South Africa, Brazil, and Mexico — to see what they think about Bitcoin (infographic below).

When asked “have you ever heard of Bitcoin before today,” 48% of Indonesian respondents said yes, followed by 45% in Vietnam, and 34% in the Philippines — all Asian countries. South Africa and Mexico had the lowest response rates of 13% and 16% respectively.

Bitcoin is highly volatile — it soared from under $10 to over $1,200 over the course of the year, with various ebbs and flows. China played a huge part in driving the surge as well as the crashes. China’s largest Bitcoin exchange stopped accepting yuan deposits yesterday  morning, sending the price tumbling to $522. The price has since gone back up to around $700.

One of Bitcoin’s biggest selling points is how cheap and easy it is to transfer money. Traditional cross-border transfers (like Western Union) charge exorbitant fees, while Bitcoin is basically free. Furthermore, it is global and not controlled by one particular government.

Adam Draper, who runs a Bitcoin-oriented accelerator program, said that Bitcoin is still more of an asset than a currency. If and when it stabilizes, the impact could be the largest in countries with emerging economies.

“It is interesting to look at inflationary markets like Argentina, Venezuela, and India, where the value of a Bitcoin could be a better store of value than their own currency,” he said in an interview. “Remittances and cross-border payments are also a big deal, and Bitcoin could change the game if adopted appropriately.”

The respondants in Jana’s survey view Bitcoin as less safe than banks, more safe than the stock market, and comparable to investing in property.

However the Bitcoin ecosystem still has a long way to go before it is feasible or practical for people who don’t have money to gamble. Because Bitcoin is still just that — a gamble. 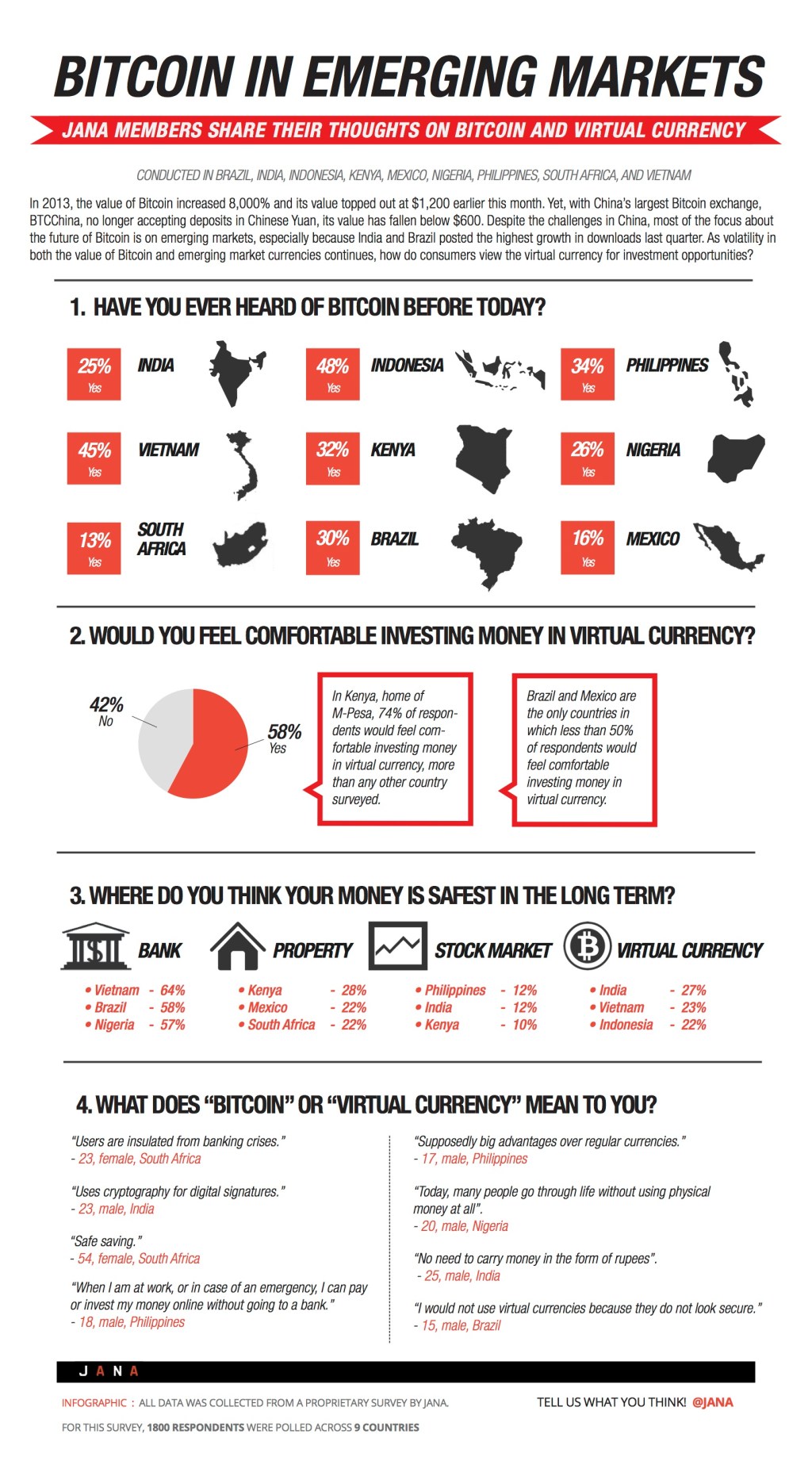