The first season of Telltale Games’ episodic adventure series The Walking Dead was GamesBeat’s 2012 Game of the Year. So it’s safe to say that expectations are a little high going into Season Two, which officially kicked off on PC (reviewed), Mac, Xbox 360, and PlayStation 3. Luckily, the first episode, All That Remains, delivers on many levels. It’s emotional, tense, and well written. It’s more of The Walking Dead. For many people, that’s more than enough reason to justify the $25 purchase.

Child characters are tricky to pull off — just ask the writers of The Walking Dead television show responsible for Carl in Season Two. But Telltale Games has done an admirable job of reintroducing a child character and making her the focus of the story in a way that feels believable and compelling.

After a heartbreaking pretitle screen prologue, Season Two places you in the shoes of Clementine, the endearing preteen whose relationship with Lee Everett provided much of Season One’s emotional heft. But this isn’t the same soft-spoken, innocent girl we once knew. Clem is older and harder now. She knows how to survive. She checks every bathroom stall for walkers and keeps a gun close at hand. Yet she’s still vulnerable. Every battle against the undead feels desperate. Adults are often a source of suspicion and distrust. Even the simple act of retrieving a hammer from a high shelf is a herculean effort that reminds you of Clementine’s limitations. 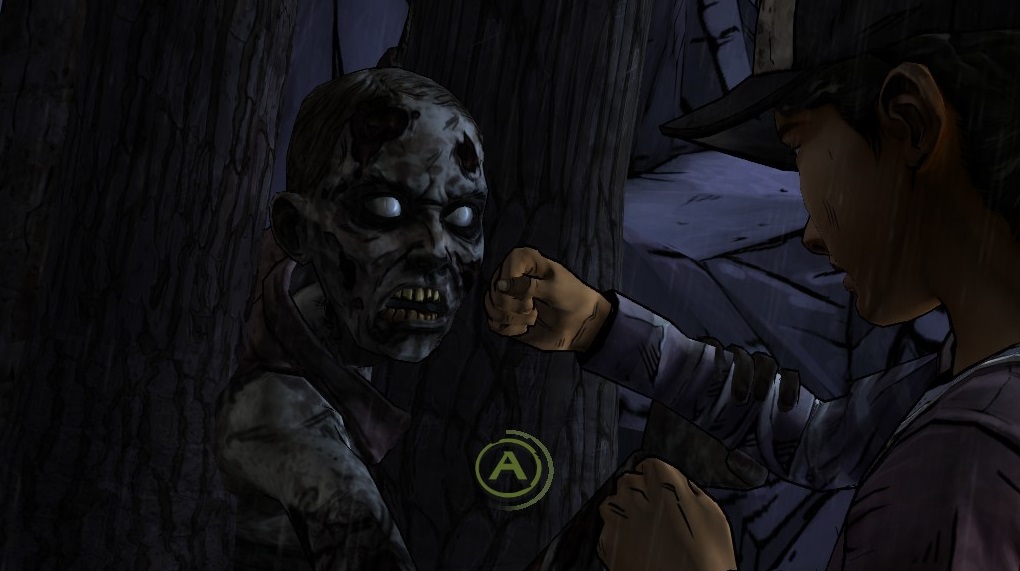 Above: Action sequences are numerous in Episode One.

All That Remains also doesn’t skimp on the violence and gore, forcing Clementine into situations that would make an adult squirm. This is The Walking Dead. Things get dark. Two scenes in particular are stomach-churning, and I won’t spoil them here. But I have to give Telltale credit for taking what could’ve easily been a standard gaming trope and turning it on its ear in brutal and shocking fashion.

Strangely, playing as Clementine made me think of Lara Croft. Like Square Enix’s recent Tomb Raider reboot, All That Remains portrays a vulnerable female character who takes a hell of a beating in a horrible situation. But while budding archaeologist Lara eventually turns into a gun-toting, bloodthirsty badass, Clementine is still just an ordinary girl. No guns. No superpowers. No reliable adults to depend on. This makes Episode One an intense experience, and it’ll be interesting to see how Telltale raises the stakes in future installments. 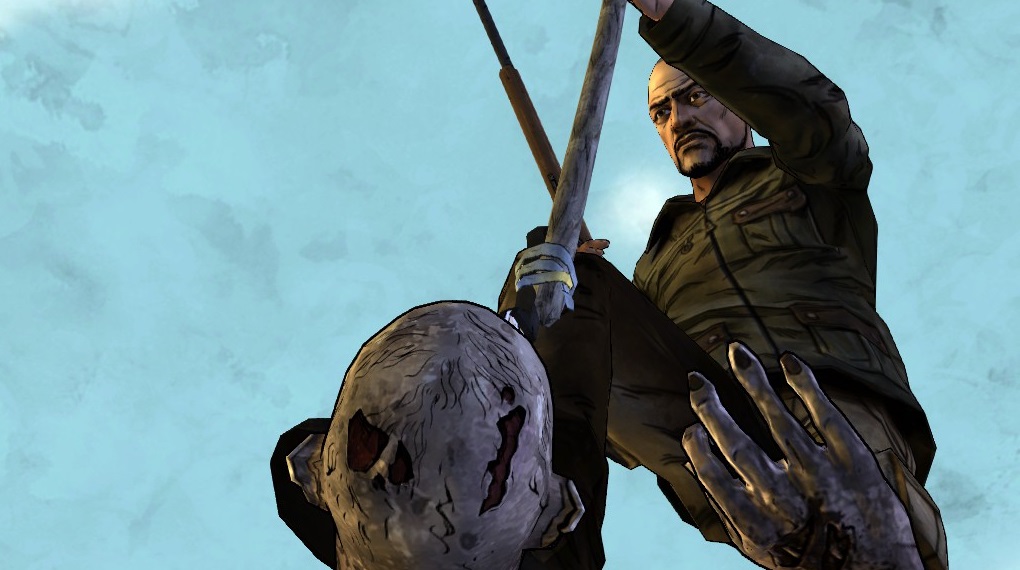 Above: Season Two has whole new cast of characters to get to know and distrust. Pete is the grizzled father-figure type.

Season One’s choices don’t have a major impact … yet

If you played Season One, you can carry over your save file and the choices you made to the second season. If you didn’t, the choices are randomly assigned. It’s a little disappointing that Telltale hasn’t given players the option to pick their own choices going into Season Two, leaving anyone who lost their earlier saves for whatever reason out in the cold.

Not that it matters. So far, the choices you make in Season One seem to have little effect on All That Remains. It has some callbacks, including one notably melancholy scene where you can decide to divulge Clem’s past. But most of the characters you spent time getting to know in Season One are absent for various reasons, and a new batch of survivors have taken their place. But you get little time to get to know these newcomers in between All That Remain’s many action sequences, and the emotional investment just isn’t there — yet. I have faith, however, that Telltale has big things planned for Clementine and her new group in the coming months.

It still barely counts as a game

The Walking Dead is more interactive fiction than actual game. While this will be fine with many people, others will miss the lack of traditional gameplay. Telltale has seemingly thrown the notion of puzzles out the window. One section where Clem sneaks through a house could’ve been a great, nail-biting stealth sequence, but once you realize you’re in no danger from the house’s inhabitants, it becomes more tedious than tense. This episode has a greater emphasis on action, but luckily, Telltale has taken some of the refinements it made in another of its adventure series, The Wolf Among Us, and applied them here. Combat is more streamlined and faster-paced than in Season One. But The Walking Dead’s QTEs have always been its least interesting aspect; all that time spent dodging zombies is time that could be better spent on dialogue and plot. 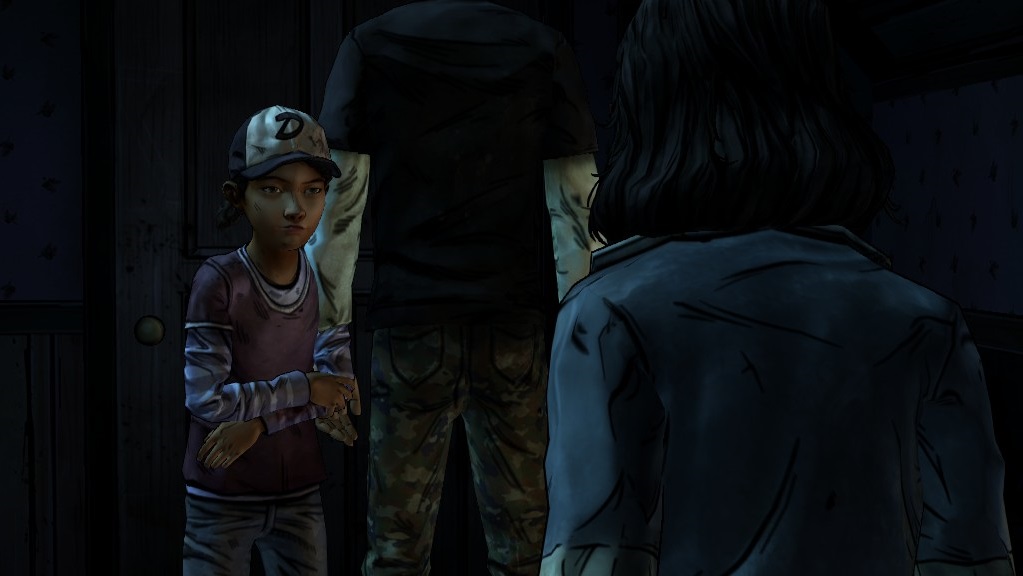 Above: Is this a bug or a deleted scene from The Blair Witch Project?

Telltale seems to have fixed some of the technical problems that plagued Season One. My save game file uploaded without a hitch, and my playthrough was stutter-free. Yet I still encountered one bug that caused characters to appear in rooms like ghosts while Clem went about her business. It was both comical and unsettling, but not game-breaking — which makes Season Two a more stable product than its predecessor.

All That Remains is short, roughly two hours long. Yet Telltale Games has done a good job in setting up future episodes by asking tantalizing questions about its plot and cast. Its decision to make Clementine the hero is a brilliant, depowering move that increases the tension from last season while still giving us a familiar, sympathetic face to root for. Although the supporting cast are currently mostly blank slates, the conflicts and relationships established in this episode promise bigger things to come. I’m eager to see where the story goes from here.

The Walking Dead: Season Two — Episode One is out now for the Xbox 360, PlayStation 3, PC, and Mac. The publisher provided GamesBeat with a copy of the PC version for the purpose of this review.