The producer offers the guitarist some feedback: “Can you do that again, but just make it a little nastier?” 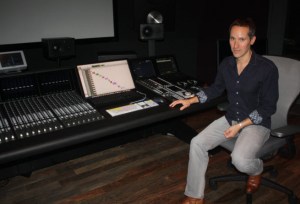 Chuck Doud, my tour guide at the studio inside Sony Computer Entertainment America’s headquarters in San Mateo, Calif., pauses while the bass guitar issues a low moan that turns into a metallic screech. This is proof positive that Sony is dead serious about putting authentic, state-of-the-art music into its video games.

“It’s a full service music studio inside of a video game company,” Doud says as he shows GamesBeat around the facility, which opened its doors in June 2013 after two years of construction. “We are tightly integrated with all of our game development teams.”

Sony created the centralized music group so that it can be fully integrated into all of its design teams. Doud wants gamers to feel like the music is an integral part of the game, changing dynamically as the game scenes change and deepening the sense of immersion in the game experience. Sony made the investment as it geared up for the launch of its PlayStation 4 video game console in November.

“What it means is we have the opportunity to touch the music in its embryonic stages as the game directors are beginning their work,” Doud says. “We take it all the way through the production and final integration into the game.”

Cleary, video game music is not just about beeps and bloops anymore, like it was in the days of Donkey Kong and Pong. Those sounds were memorable, but so are the inspiring soundtracks being created today.

Austin Wintory created the soundtrack for Sony’s Journey video game, a critically acclaimed title from Thatgamecompany for the PlayStation 3. The music was nominated for a Grammy award, the first time that ever happened for a video game. Doud says the resources being applied to video game music studios are on par with the best recording facilities in the world. 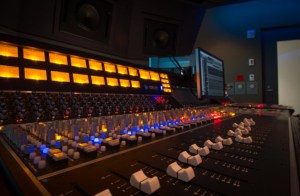 Above: Mixing console at the PlayStation Music Studio. Sony has both 5.1 and 7.1 audio mixing and recording consoles.

God of War: Ascension used an 80-piece orchestra, recorded at Abbey Road Studios in London. The title track from The Last of Us was created by Academy Award winner Gustavo Santaolla. Their work is a big investment because games can go on for 20 hours or more.

Perhaps a couple of hours of that music is source material, but a lot of what you hear is constructed on the fly from the source material. The team will listen to the source music, then create derivative material, resulting in a “customized and immersive music for our players,” Doud says.

The game programmers take chunks of the music and attach it to parts of the game. But that music can be dynamic. The music changes as the game speeds up or slows down to match the drama in the game or the player’s level of intensity. It’s not just a dumb loop that plays over and over again. The chunks can be assembled in any order and still sound like music.

That kind of music, dubbed procedural or programmatic, is becoming a bigger and bigger part of what we hear in games. The music may not be the same if you play through the game a second or third time.

Sony has its own music business and has been able to tap talent such as composers, recorders and mixers, technicians, programmers, and musicians. There are 20 music production and legal staff on hand. They all touch every Sony title being made in the U.S., as well as some titles being created in Europe and Japan. 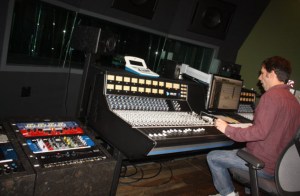 Above: Recording a live jam session for Infamous: Second Son.

The music is actually recorded all over the world, wherever the talent is.

“We are driving the process through the centralized studio,” Doud says. “We try to find the best creative fit for the audio.”

Sony started down this track around seven years ago, when the PlayStation 2 was still dominant. It built its first true audio rooms in a game studio in San Diego, Calif. Between San Diego, Santa Monica, and San Mateo, Sony has a huge amount of audio equipment that its musicians and sound experts use on a daily basis. There are dozens of Dolby 5.1 audio editing pods, tracking rooms, voice booths, and mix stages. The centralized sound and music teams work together across the three campuses.

The San Mateo location, where Doud is giving me the tour, has two music control rooms, one for 5.1 audio with an API 1608 recording console, and another for 7.1 audio with a Euphonix System 5 mixing console. There are two dedicated live recording rooms and a big room that can accommodate up to 30 musicians. It’s the same kind of facility you would need if you were making records. 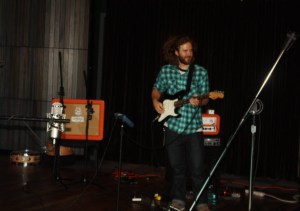 Above: Guitarist jams for the ambient music in Infamous: Second Son.

There are 17 individual 5.1 audio edit suites, or tiny versions of the control rooms. The walls and ceiling have multiple layers for soundproofing, and the floor is raised four inches above the building’s floor, with cables running in trenches underneath.

The team recently created soundtracks for Knack, including the game’s opening cinematic music that was recorded by a 10-piece brass section. And the musicians are still working on music for Infamous: Second Son, The Order: 1886, and Uncharted 4.

So the next time you play a game, remember that the creativity isn’t just about what you see on the screen. You can close your eyes and hear it too. 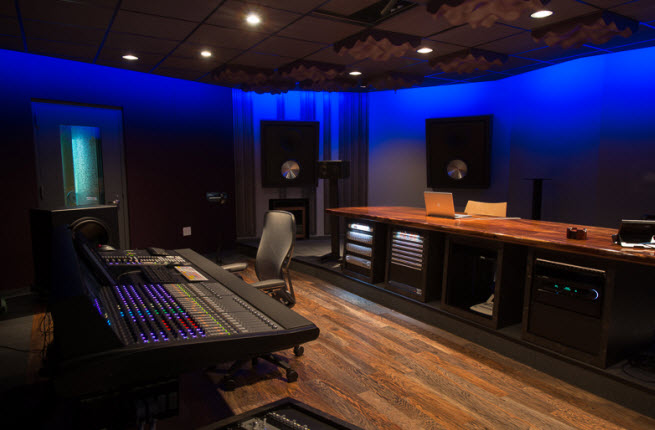