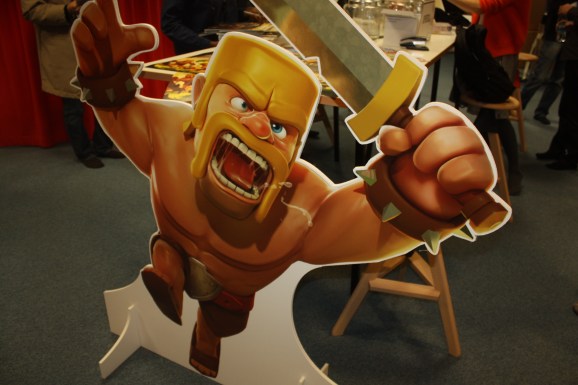 Experience the action in first person.

The New York Times profiled a Clash of Clans fan named George Yao who spent six months as a top-ranked player and played the game on five iPads — at the same time.

This game is so big that if you dominate it like Yao did, you can become a worldwide celebrity. Clearly, we are in the age of the decades-long evolution of the game business where playing a game can make you famous. This story gives you a wonderful slice of the gaming life.

The story tells you what it takes to stay at the top of this social strategy game, which is the big reasons that in October, SoftBank invested $1.5 billion for a 51 percent ownership in Supercell, the Helsinki-based game studio whose only other game is Hay Day. Clash of Cans is bringing in millions of dollars a day to Supercell, which we visited a few weeks ago.

Clash of Clans combines both real-time and offline multiplayer play where you build your own medieval village, join with clans of others, and then pillage villages of rival gamers with your own barbarian hordes and wizards. The game has more than 40,000 active clans and has been one of the top-grossing games on iOS for more than a year. I’ve been playing it regularly, outside of a clan, for months.

In Clash of Clans, you can spend up to $100 at a time to buy gems for speeding up the building of defenses or the training of troops. Or you can play for 48 hours straight on a weekend, like Yao did, who goes by Jorge Yao in the game.

The 25-year-old Yao was the first player to break the 4,000-trophy mark, and he held the No. 1 rank in the world for the game for six months starting last January. That notoriety earned him 400,000 views in an audio interview series he did with a blogger named Flammy. It also got him more than 79,000 Twitter followers and 30,000 “likes” on Facebook.

But Yao announced in May that he would retire. He wanted to go out on top. He met with the New York Times writer near San Francisco airport and professed “I hate my job” at Provident, a financial services company where he is a compliance analyst on new information technology projects.

Yao was new to the San Francisco area, having migrated from Philadelphia. He tried going out after work to meet people in bars, but that didn’t yield him a great social life. So he was ripe for Clash of Clans when he started playing it in the middle of 2012. He was maniacally focused on winning trophies in the game. If he made a mistake in an attack on a rival village, he would make up for it by playing the game 48 hours straight in a weekend. “Fueled by self-loathing and Red Bull,” the story said.

He said the keys to the game are patience and focus. To stay on top, he spent money — at least $250 a week. He was running out of money. A clanmate took pity on him and subsidized his gems. And in return, Yao kept his clanmate’s account active while he was traveling. On weekends, to protect himself from attack, Yao would order in meals and trigger a shield that gave him a temporary respite from attacks. That took the fun out of the game. Yao lost 20 pounds.

He took a vacation to Las Vegas and finally decided to withdraw from the game. He recently started promoting a game called Samurai Siege, a similar title to Clash of Clans, made by London-based Space Ape. He now works as a marketer for Space Ape and relocated to London.

Clearly, Yao is a blessing and a curse for Supercell. On the one hand, getting publicity in the New York Times and having such a dedicated fan is great. But the signs of addiction are clear, and many gamers who read about Yao will see him as a cautionary tale, one to avoid in their own gaming habits.

And that wouldn’t be good for Clash of Clans or Supercell.