No year-end retrospective would be complete without an article full of facts and figures about the video games and business of the past 12 months. It’s interesting to see which home consoles and games sold the most or the fastest or got the best reviews. But we won’t have those numbers until next month (it still is 2013, you know!), so here are some other (hopefully) interesting statistics from this year as it winds down.

The crime-ridden open-world series had a pretty busy year all around. In addition to its latest entry coming out back in September and the slightly delayed release of the online version a couple weeks later, we also saw Grand Theft Auto III, Liberty City Stories, and Vice City Stories available for download on the PlayStation Network and a mobile port of San Andreas that I’m pretty sure is the sort of thing we would send back in time to show previous generations how awesome it is to live in the future.

GTA V was an immediate financial success, making $800 million in its first 24 hours. Two days later, its sales topped $1 billion, making it the fastest-selling entertainment product ever. And by Oct. 8, three weeks after it came out, the game had broken seven world records.

Above: Imagine that armored truck is our wallets and the crook here is Take-Two. That’s how the publisher treated our wallets after Grand Theft Auto V came out.

To put those numbers in a bit of perspective: The day-one sales would be like if everybody living in the United States in 2012 just decided one Tuesday to give publisher Take Two $2.60. And then the following Friday, they all threw in an extra $0.59 each. Just because.

GTA V sold enough copies in its first day to give one to every citizen of London, and they’d still have over 3 million left over to make awesome forts with or something.

It did alright, is what we’re getting at.

Everyone complains about sequels, right?

Above: Except for that one that everyone just bought like immediately.

One of the most popular gripes people level at the video-game industry is that developers make too many sequels. Or terrible movie tie-ins; it depends on how long it’s been since the last Smurfs film. Creativity is dead in the industry, these people say. So let’s see.

We compiled a list of 930 releases from this year. This list did not include mobile games; those come out almost hourly, and tracking them (as folks like AppAnnie do) all would be like trying to count raindrops in a thunderstorm. So it was basically retail and downloadable titles for home consoles and everything that came out on developer/publisher Valve’s digital-distribution platform, Steam.

Out of these 930, 565 were either sequels, licensed, or otherwise based on something that already existed. This included obvious culprits like Assassin’s Creed IV, but it also extended to titles like MagRunner: Dark Pulse, which borrows heavily from writer H.P. Lovecraft’s Cthulhu mythos. You can see the Great Old One in the pulpy flesh at the end of the trailer.

But that leaves 367 games that didn’t bank on already established works to boost their appeal to giant nerds. So from this list, the split is about 60/40, which really doesn’t seem that bad. It’s almost certainly due to an increase in the visibility of independent developers and an increased capability for them to share their weird, unique thoughts with the world.

One mobile game is basically C-3PO from Star Wars 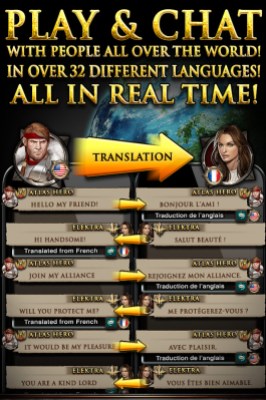 Above: Now you, too, can speak to the French.

Game of War: Fire Age is a free-to-play, massively multiplayer online real-time strategy game in which everyone plays on the same server.

Meaning everyone who plays it. In the world. With all their languages and stuff. And while 71 percent of the people who play Game of War speak the same language (English), that still leaves 29 percent at risk of not knowing what their teammates are saying. Well, the game is ready to just go ahead and take care of that.

A combination of automatic and fan-contributed translations ensures that everyone playing Game of War is all caught up. The translation tables have a quarter of a billion entries for non-English language and increases by 30 percent every two weeks, according to figures developer Machine Zone provided GamesBeat over e-mail. And that’s almost 10 entries for each copy of Grand Theft Auto V people bought in the first 24 hours.

If you want to talk about unoriginal …

I also examined the games on the list to see if any words in their titles popped up more often than others. My original thought was that “Zombie” would be right at the top, but as it turns out, that was only in six game titles this year.

The most frequent things I found weren’t even words — they were numbers. Specifically, the number 1, which appeared 51 times, and 3, which appeared 46. And why? Well, because this is 2013, and basically every the name of every sports game, sim, and highly inaccurate and terrifying surgery game ends with the year.

Other popular words were “war” (42), “world” (28), and variations on “death” (24). “Dark” appeared 20 times on the list “Shadow” had 14 mentions, and “sunshine,” “happiness,” and “puppies” appeared a combined total of zero times. So basically, games are dark. Don’t even try to cheer them up because they’ve never even heard of puppies.

But they have heard of dragons; that word appeared 11 times.

But wait, we have more

If you really want to point a finger at unoriginality, check out the structure of game titles. An unreasonable 52 of the releases we found had names that follow the structure of “The ____” (e.g. The Croods, The Bridge). That’s one out of every 20 titles.

More interestingly, however, is the structure that one of every 10 of the games I found followed: “___ of ___.” Think The Last of Us, Edge of Space, World of Warcraft/Tanks/Warplanes/Goo … I could go on, but I won’t. I like my readers too much.