Apple may be the world’s most valuable brand, but Google got more media coverage in 2013 — at least from the traditional, paper-and-ink press.

Financial news publisher Dow Jones tracked coverage of companies on the Global Dow (a 150-stock index of corporations) using its Factiva news archive and calculated their total mentions across “thousands” of global, English-language print publications between Jan. 1 and Dec. 1, 2013.

Google came out on top, beating out companies like Apple, Microsoft, and Bank of America. The search giant narrowly surpassed the iGadget maker, with 123,769 mentions across the media publications Dow Jones examined — up from 114,945 last year. Apple racked up 120,451 mentions over the course of the year, significantly fewer than its 165,100 total in 2012. 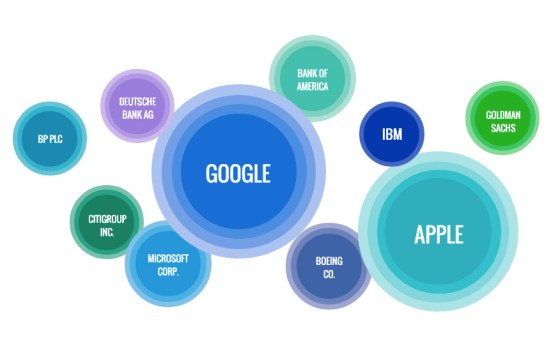 Above: The bigger the circle, the more print media mentioned that company in 2013.

Google’s biggest spike (13,336 mentions) came in May, when it held its Google I/O developer conference. Apple’s was in Sept., when the company announced its new iPhone models (5S/5C) and released iOS 7.

Other noteworthy tech companies on the list include Microsoft, with 84,174 mentions; IBM, with 48,734; and Sony, with 46,468. You can check out a full, interactive infographic with more information here.

The analysis was based on media mentions in “thousands of leading, global print publications,” according to a Dow Jones representative, including Dow Jones, The Wall Street Journal, Reuters, The Guardian, The Globe and Mail, China Daily, The Australian, Agence France Press, Associated Press, The Independent, and Irish Times.