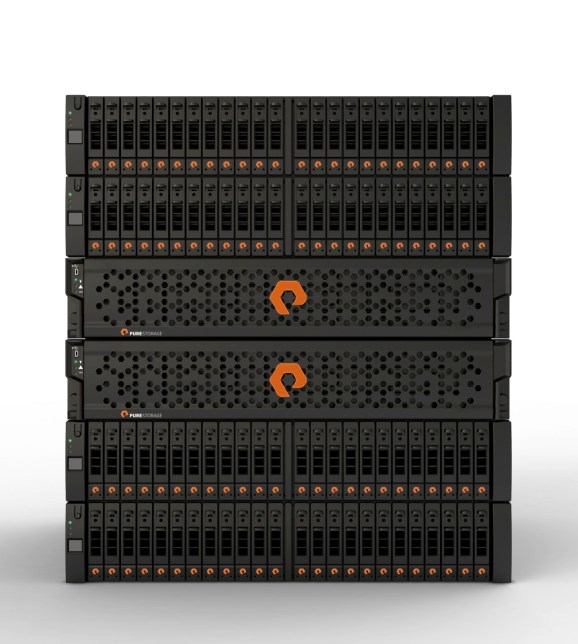 In the business of using flash in data centers to store and serve up information quickly, a couple companies have struggled this year. Fusion-io has reported three unprofitable quarters and lost two cofounders. Violin Memory just sent chief executive Don Basile on his way after the company went public and saw its stock price falter.

But the news is not all bad in flash world. Pure Storage, a vendor of all-flash storage boxes, has swelled to a size worthy of an initial public offering, the Register reported today. The publication speculates the company could have a $100 million revenue run rate.

The company has picked up $245 million in venture capital to date, including a $30 million raise in August 2011 and backing from In-Q-Tel. Customers include Riverview Hospital, the San Jose Sharks, and Yodle.

While Fusion-io and Violin Memory might not represent the most imposing threats to Pure Storage as it seeks to sell its boxes to more businesses, the latter company might need to look out for Primary Data. Former Fusion-io cofounder and chief executive David Flynn is behind the startup, which has already picked up $50 million in venture funding.

And then there’s enterprise storage giant EMC, which has brought lawsuits against Pure Storage as some people have left the former company and hopped to the latter.

What’s more, in the span of two days, Western Digital and Cisco committed to paying more than $1 billion to enhance flash portfolios.

Pure Storage, for its part, talks about how customers can pack lots of data into its flash by compressing data, ensuring it isn’t duplicated, and making other changes. The company says the “logical size” of its hardware is five to 10 times bigger than its actual size, driving down the price of storing each gigabyte of data in it. Common applications for the hardware include databases, virtual desktops, and storage for the many virtualized servers that can run inside of each physical server.

EMC knows how to sell into big companies worldwide. Its net income for the third quarter of this year was $639 million — probably a bit bigger than Pure Storage’s annual revenue at this point. Now, if Pure could entice a few more people to come over from EMC, perhaps the company could sign up many more large customers and succeed in making its investors happy with a public offering.