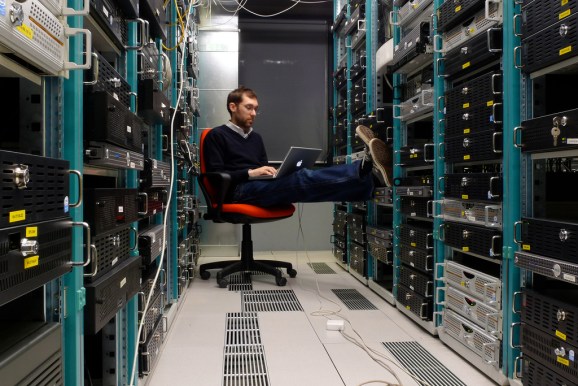 Cisco and VMware have made significant progress this year by announcing products that give data center administrators more control over their networks in the field generally known as software-defined networking (SDN), analyst Stuart Miniman writes in a post today on the technology research site Wikibon. But technological achievements have not yet translated into big money.

The breakthrough is especially evident for VMware, which for years specialized in software to make many virtual servers out of each physical server — a concept called virtualization. In releasing its NSX software, which can quickly create virtual networks, VMware “has vaulted itself further into the networking conversation than most of the traditional networking contenders have in the last decade,” writes Stuart Miniman, an analyst who covers cloud computing, network, virtualization, and storage for Wikibon.

Cisco, a major vendor of networking hardware, released software and, naturally, hardware that sets policies for how applications run on networks. The package, dubbed Application Centric Infrastructure (ACI), receives recognition from Miniman. “Cisco ACI’s messaging of delivering more value to the application layer is a strong one,” he writes.

But ACI will only work on Cisco’s Nexus 9000 Ethernet switches that connect to servers and other switches in a data center. That means companies interested in the advantages of ACI will have to replace their switches with these new designs from Cisco.

VMware’s NSX software, on the other hand, works with many kinds of hardware, which Miniman notes.

On top of that, VMware’s product might be easier to try out. “A software-based solution like VMware NSX holds an advantage for early adopters that want to test out a solution versus Cisco’s ACI which requires the commitment of purchasing a new hardware platform,” Miniman writes.

Coming up with this technology wasn’t a snap. It took $1.26 billion for VMware to acquire a startup called Nicira.

And NSX could get sweeter in the near future. Nicira cofounder Martìn Casado has been cooking up enhancements to NSX, he told VentureBeat earlier this year.

But for now, a couple of months after NSX became generally available, system administrators haven’t been vocal about their desire to buy it. For that matter, Cisco’s ACI package hasn’t attracted a huge amount of visible customer interest yet, either. It’s early, though, as the total package isn’t available yet.

Miniman makes no mention of customer adoption of either Cisco’s or VMware’s technologies. In a message to VentureBeat, he wrote that customers are interested in the products, but total revenues flowing to the companies could be in the millions, not billions.

So cloud providers, enterprises, and other technology buyers seem to be sticking with existing networking hardware and software, which might not be able to instantly create software versions of load balancers or prioritize certain traffic but do perform the basic function of moving data around, into, and out of data centers.

Adoption of SDN generally has been slow-going. Less than 30 percent of respondents to a recent QuinStreet Enterprise Palmer Research survey of 321 people involved in purchasing data center infrastructure had deployed SDN or planned to deploy it in the next year, and nearly 40 percent didn’t have plans to deploy it.

At the moment, then, the good days for SDN appear to lie ahead, if they ever come.