Mobile app downloads set new records during the Christmas holiday around the globe, according to new data from mobile app analytics provider Flurry.

Christmas app downloads drove a 91 percent spike compared to an average day in the first three weeks of December, Flurry said. That’s a lot of downloads, but the size of the spike has been diminishing over time as the app market matures and globalizes.

New connected smartphones and tablets are increasingly common as gifts during the holidays, with millions of people activating new devices and downloading apps that make use of them. Christmas Day is still the biggest day yet for mobile app downloads, which were up 11 percent this year compared to Christmas 2012.

“Devices are evolving from being our new shiny toys to our everyday companions,” said Mary Ellen Gordon, head of research at Flurry, in a blog post. “The Gold Rush days of huge jumps in the overall size of the connected device installed base on Christmas, followed by a dizzying rush of app downloads, are fading. Of course, there will still be apps that tap into some vein of consumer interest or amusement and developers who strike it rich as a consequence.”

Flurry provides analytics on smartphones and tablets. The company analyzed 400,000 apps and found there was a 25 percent increase in app downloads on an average December day, compared to a year ago.

The data in the charge below shows that year-on-year growth for overall app downloads and the year-on-year Christmas Day growth have slowed considerably, from 97 percent in the past year and 90 percent from 2011 to 2012. 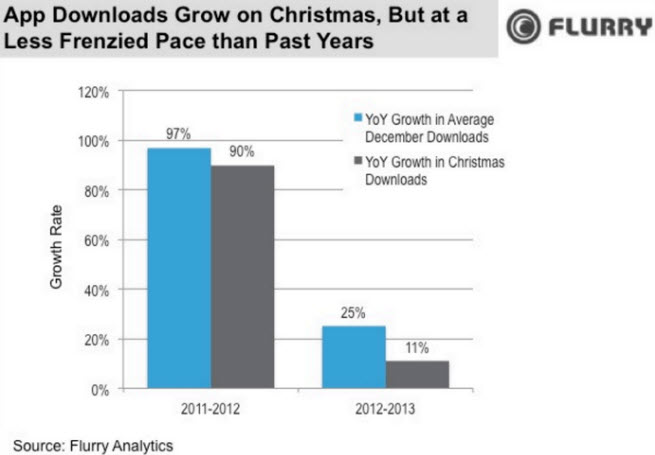 Above: App downloads grew, but only at 11 percent compared to last Xmas.

Many consumers in Western Europe and English-speaking countries, where Christmas is a big holiday, already have devices. Fewer people are coming online with mobile for the very first time. And consumers who are on second, third, or fourth devices have apps that they like and trust. They will still download new apps, but not as many as they would if they had a device for the very first time.

Moreover, the biggest growth in mobile is coming from countries where Christmas is not a significant holiday.

Of the apps downloaded, Flurry found that games and social apps were downloaded on Christmas at twice the rate they were on a normal December day. The other categories that saw a surge were media (photo, video, music) and lifestyle (sports, books, magazines, entertainment).

“Overall, the successful developers in 2014 and beyond will be those who put in the hard work of identifying a target group of users, creating apps that work well for them, and continually refining and reinventing mobile experiences to profitably retain those users,” Gordon said.

Above: The rush was on for games and social apps.