The organizers of Slush paid my way to Finland last month. Our coverage of the event and of the Helsinki startups we talked to remains objective.

HELSINKI, Finland — Grand Cru has built a very nice and very Finnish headquarters for its employees, complete with a wood-burning stove in the kitchen and a sauna for important meetings. It treats its employees well because it figures it will be around for a while, based on the prospects for its first game, Supernauts, which the game studio is building for smartphones and tablets.

Supernauts is that rare mobile game that has been in the works for more than two years by a studio with venture capital backing in excess of $13 million. It combines Minecraft-style user-generated building with a cartoon superhero theme, and it is the latest game coming to the worldwide stage courtesy of funding from the Finnish government. Grand Cru is betting big and polishing a game that it hopes will be the next to put Finland — the source of games like Angry Birds and Clash of Clans — on the map of the fast-growing, multibillion-dollar mobile game business.

The company’s headquarters is in Helsinki’s bohemian Kallio area — a working-class neighborhood that is overrun with startups and bars. Grand Cru commands the top floor of a 1960s building that we saw as part of a tour during the Slush startup conference in November. When we walked in, chief executive Markus Pasula greeted us and asked us to take our shoes off, so that we would all feel more comfortable.

“We are famous in Helsinki as the game startup with a sauna in the office,” said Thorbjörn Warin, chief marketing officer at Grand Cru. “And with Supernauts, we are working on what we believe is the most ambitious mobile game ever made.” 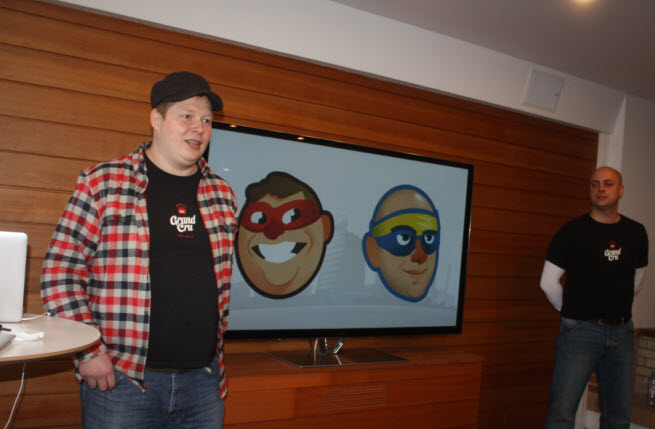 Creating a unique place to work

The company seems to get its ambitions from its lofty surroundings. From the rooftop terrace above the 12th floor, you can see much of Helsinki and get a glimpse of the surrounding Baltic sea. The kitchen has a wood-burning stove and it is often stocked with Finnish donuts. The office suites are colorful and well-lit, with plenty of views of the surrounding area. People take their shoes in when they walk in so that they’ll feel more comfortable. The idea is to make the employees and visitors feel like they’re part of something special.

“You need to have the right kind of culture in your organization,” Pasula said. “Gaming is something that changes every two years. And your organization has to be ready to change with it. You don’t want to build a structure that stops you from adapting. So we have a very flat company structure.”

The founders previously worked at Mr. Goodliving, a Finnish game developer, for more than six years. Real Networks, which owned the studio, closed it in 2011. Mikko Wilkman from Sulake, maker of Habbo, joined the crew of five former Mr. Goodliving employees to form the new venture. They got funding before they had a PowerPoint deck ready, based on an idea to take user creativity into mobile in a big way.

Now they have 35 employees, including a variety of non-Finn staff such as the Swedish-born former Wooga executive Warin. The company takes a lot of trainees coming from GamePro, a game education program sponsored by the Finnish government.

“We wanted to hire the best superstars of the game industry, those who are at the peak but are willing to change their skills for the future,” Pasula said. “We are also looking for young people who are really excited to join the game industry and show huge potential for growth.”

From the start, the team wanted to make a big mobile game. They took their inspiration from the successes around them.

Carrying the flag for Finland

As we noted earlier, Finland’s national pride used to be tied up in was Nokia, the cellphone company whose products blanketed the world. Now, Nokia is being acquired by Microsoft, and Finns have turned to startups as their new economic engine to diversify the country’s job base.

The Finnish government’s Tekes, its funding agency for tech, injects more than €500 million (more than $671 million) a year into research and development. About a third of that money, €135 million, goes directly into startups. That’s up from €30 million a decade ago. Jukka Hayrynen, the director of startup companies at Tekes, said that the country’s ambition is to create the best startup hub in all of Europe.

Gaming has become the biggest success for Tekes, as Finland now has 180 game startups with 3,000 employees. Supercell, the Helsinki maker of Clash of Clans, sold a 51 percent stake to Japan’s SoftBank and GungHo Entertainment for $1.53 billion. Tekes invested €400,000 in Supercell and in 2013 it expects to receive €260 million in taxes from the startup. Another big Finnish success is Rovio, maker of Angry Birds, which has been downloaded nearly 2 billion times since it first appeared in 2009.

Grand Cru hopes to follow in the footsteps of those companies and foster a game industry that waited a long time for mobile gaming to become the center of the gaming universe. Finland’s game sector has its origins in the Demo Scene movement of the early 1990s, when various computer whizzes gathered together to show off their inventions at a regular group. It was not unlike the Homebrew Computer Club of the 1970s that gave rise to Apple.

The Finnish government started investing in game companies in 1995, and it put some money into Grand Cru as well. Pasula has spent 14 years in mobile gaming startups, and his team has impressed a lot of investors so far. 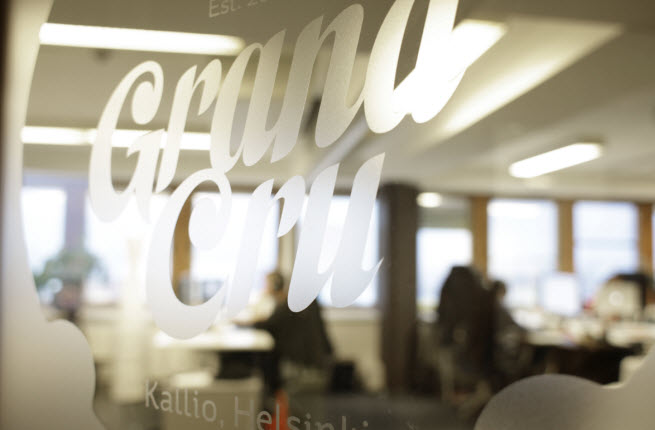 Above: The entrance to Grand Cru atop a 12-story building in Helsinki.

Grand Cru has spent close to a year refining its free-to-play game. It wants to make the game more accessible to players, who may not necessarily be familiar with using touchscreens to create their own virtual dream homes.

“It’s like a LEGO simulator, where you get your own world and play with a lot of blocks and bricks,” Warin said. “People will gather and build stuff together in real-time.”

The game is running live in some countries such as Canada as Grand Cru tweaks its design. It is set in the future when the polar ice caps have melted and Earth has become uninhabitable. Your job as a Supernaut is to build a habitat for humanity orbiting Earth. The game is a 3D creative social game in which players build and share their own, unique worlds.

The characters travel to a flooded Earth to rescue humans. The game was inspired by Minecraft and other casual sandbox games. In the game, each player gets a customizable, semi-private space where they can create and craft blocks and materials such as clay, bricks, concrete, wood, and tile. They can then use those materials to build structures while the game is still running. They don’t have to enter an editing mode.

The game has scores of levels in a variety of cities. Each level has 3D physics puzzles where the player has to rescue Earthlings by getting them to safety by building bridges, clearing paths, and removing obstacles.

“There are so many games that treat the finger as if it were a computer mouse,” Warin said. “The good touchscreen games really show an understanding of the human-machine interaction. We want to do something that feels very natural.” 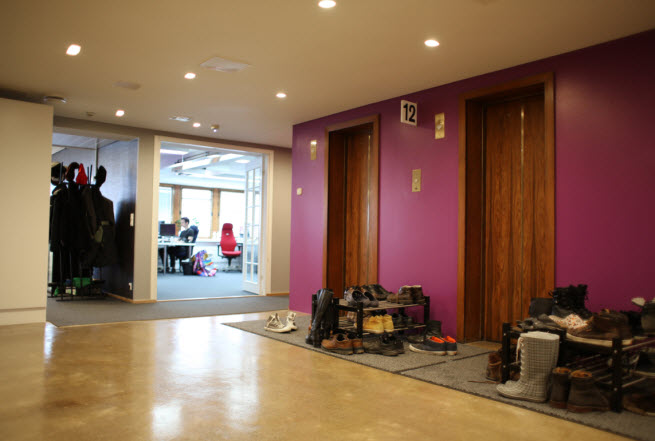 Above: Guests remove their shoes at Grand Cru so they can feel more relaxed.

Living up to the standards of the neighbors

It won’t be easy to stand out after the launch. The Apple iTunes App Store has more than 1 million active apps, including 183,970 active games. More than 75 new games are being launched a day. Getting noticed is a huge challenge, so Grand Cru is focusing on making a great impression at the outset.

The team watched the success of Rovio and Supercell, as well as the success of Mojang’s Minecraft. It had the vision to focus on making a bigger investment than usual for a mobile game. Pasula said the focus is on building the quality required for next-generation mobile gaming.

“Our aim is to revolutionize the social gaming genre,” Pasula said. “It has taken so long because we’re making an innovative game that has a lot of things going on in it. Our process for designing isn’t just to create something and launch it. We are processing the feedback from users.”

The title uses the Unity 3D game engine, which can be used to easily port a game to multiple platforms. The iOS game already has thousands of players creating their own environments inside a 3D universe. Each player has a small amount of space on an orbiting asteroid to build whatever they want. The feedback has been good so far, and monetization looks promising, Pasula said.

“People are spending many hours a day playing it and they are creating unbelievable things,” he said. Warin added, “Most of what we show in our videos are things created by our players.

The global launch is coming soon.

“We’re thinking of trademarking the word ‘soon’ because we use it so much,” Warin joked.